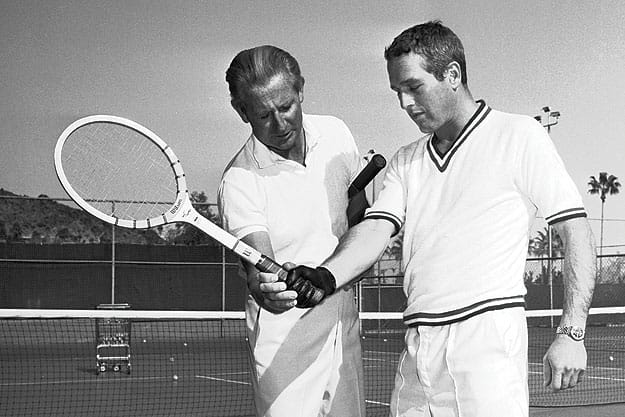 Before Alice Marble won the mixed doubles title at Wimbledon, she represented the United States in France in 1934 and collapsed on the tennis court. She was sent to a sanatorium for a few months and told not to play tennis, but she defied orders and went to the Racquet Club in Palm Springs to build her strength. She worked in the club’s tennis shop between practice sessions on the court. When temperatures soared, she remained cool on the court by putting a head of lettuce in her cap. In 1936, she won the national singles and mixed doubles championships. In 1939, she broke world records when she won the singles, doubles, and mixed doubles titles at both Wimbledon and the U.S. Open.

From the start, junior competition was important to Charlie Farrell, who encouraged and hosted young players every year. As founder, owner, and later managing director of the Racquet Club, Farrell took pride in the fact that, when the club had only two tennis courts, Donald Budge and Marble practiced there. Budge went on to sweep Wimbledon in 1937, winning the singles, men’s doubles with Gene Mako, and mixed doubles crown with Marble. He was the youngest man in history to complete the Grand Slam (four majors in one year) when he won the French Open in 1938, two days before his 23rd birthday and went on to hold the No. 1 spot for five years.

“It was so beautiful at the Racquet Club — just a great place to play tennis and give exhibition matches,” says Smith, ranked No. 1 in the world in 1972 and winner of the 1971 U.S. Open and 1972 Wimbledon championships. His son, Ramsey, now tennis coach at Duke University, competed during tournaments that helped junior players increase their tennis rankings.

Abby and Steve Solomon were at the club when Smith, Lutz, Connors, Riggs, and Ashe were there. “It was terrific. All those great players would put on an exhibition match in the morning and then in the afternoon they would play with us,” Steve Solomon says, calling the Racquet Club the finest tennis club he has ever seen “anywhere in the world.”

“Julie Copeland, tennis hostess, had a system no one had,” he says. “You would be booked on the court for an hour and a half. You could play two sets, break for lunch, and then go to another court and play two more sets. When the extra courts were added, they were all around the dining room and pool area. You never had to wait for hours to get on a court, as in other clubs.” The Solomons’ son, Ken, often accompanied his parents at the club and became such an avid tennis fan that he’s now chairman and CEO of the Tennis Channel.

Barbara Sinatra watched Connors, Gonzales, Segura, and Charlie Pasarell on the courts and occasionally played tennis with them. She remains a close friend of Pasarell, a friendship that started on the Racquet Club courts. “You know I was very young,” she says, “and I never really realized how great they were.” Pasarell, a top player in the 1960s and ’70s, opened the Indian Wells Tennis Garden with Raymond Moore in 2000 and, until recently, was tournament director of the BNP Paribas Open.

Connors was a student at UCLA when he came to the club during junior tournaments, but he returned often. “Most of the players who started playing at the club as juniors returned as professional title holders. It was almost as if they grew up with us,” Copeland was fond of saying.

The Davis Cup North American preliminary round between the United States and Mexico was played at the Racquet Club in 1975. “There were American and Mexican flags all over and bleachers set up on two courts overlooking the third court where the action was,” Solomon recalls. Smith and his partner, Bob Lutz, represented the Americans and were defeated by the Mexicans. “Despite the disappointment of losing, it still was great tennis and very exciting. I will never forget it,” Solomon says.

Emerson, winner of championships at Wimbledon and the French Open and six-time Australian Open champion, and Rosewall, former No. 1 player in the world and holder of eight Grand Slam titles, competed in the National Tennis League at the Racquet Club, a tournament sponsored by members in 1972. In addition to men’s singles and double matches, members Dinah Shore, Barbara Marx (now Sinatra), Hazel Kunody, and Marge Jackson played in a mixed doubles foursome in the same tournament that included Segura, U.S. Pro Champion for three consecutive years, 1950-1952.

A 10-game round robin at the club found Roscoe Tanner, then No. 1 collegiate player and soon to be No. 4 in the world, beat Grand Slam winner Ashe to win $2,500. “I remember Arthur flew into Palm Springs and the airline lost his luggage,” recalls longtime Racquet Club member Nelda Linsk. “He played in borrowed clothes and a racquet that he borrowed from tennis hostess Julie Copeland. No wonder he didn’t win!”

One of the club’s most colorful players was Riggs. In 1972, he won the 55 and over men’s singles in the Senior Invitational, but lost in the 45 and over division of the same tournament. In 1975, two years after losing the highly publicized “Battle of the Sexes” $100,000 exhibition match to Billie Jean King, Riggs returned to the Racquet Club to play in another club tournament. He came in second and happily walked away with $1,000.