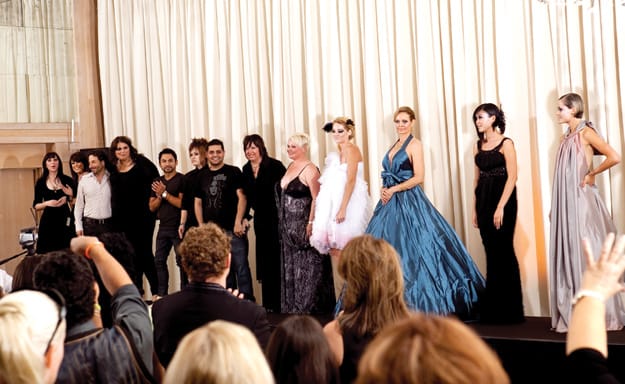 A woman, covered from turban to sweatpants, walked into Michael Costello’s boutique on Tahquitz Canyon Way. She told the designer how happy she was to see a little glamour on the storefronts in Palm Springs. After recalling the town’s posh fashion venues of yesteryear, she took off her huge dark glasses. “I’m Faye.”

She was Faye Dunaway — the movie star who’d launched a look in Bonnie and Clyde and who portrayed Joan Crawford in Mommie Dearest. “Look around,” Costello said. “No wire hangers.” He later dressed Dunaway in a knockout red gown for a Council of Fashion Designers of America ceremony.

“I think of myself as an evening-wear designer,” says Costello, who is fitting a pink number for Mariah Carey. “She loves pink.” It seems the singer wants it strapless and backless, something of a construction challenge considering her voluptuous figure.

Only 26, this couturier was born sketching, according to his mother. At 4, he infuriated his sisters by taking their clothes apart to see how they were made and began sewing a few years later.

Raised in Sherman Oaks, he frequently visited Palm Springs, where his family owned properties. One day on Palm Canyon Drive when he was 15, his father, George Costello, said (here Michael imitates his father’s Sopranos-like cadence), “Looka dat place up there. Let’s open a dress shop.” His father remains his financial angel.

His parents “love it when I bring celebrities around,” he says, “like ‘Oh, dat red bathin’ suit lady,’” referring to Pamela Anderson. His mother suggested he ask the Baywatch queen to accompany him to church. He does escort Traci Bingham (also a Baywatch alum) to fashion events and dresses (detractors might say undresses) her in revealing outfits.

But it’s clear his passion emanates from Hollywood’s golden era. His favorite designers reflect old-guard splendor: Balenciaga, Oscar de la Renta, and Carolina Herrera. “I love sparkly fabrics,” he says. And “every gown should have a train.”

He hopes to follow in the footsteps of William Travilla, known as Marilyn Monroe’s favorite costumer (i.e., The Seven Year Itch). Costello senses a kinship to Travilla. “So many similarities: [an aptitude for] sketching, draping, pleating. Self-taught, the Greek [descent] thing.”

When Costello’s mother inspected the interior of a Travilla frock, she spouted in Greek the equivalent of “Shut your mouth. Amazing. Just like you!”

Unapologetic, Costello aspires not to the perfect-inside James Galanos technique; simple, unfinished seams serve him well. As for staying power, he affirms that the garments hold together.