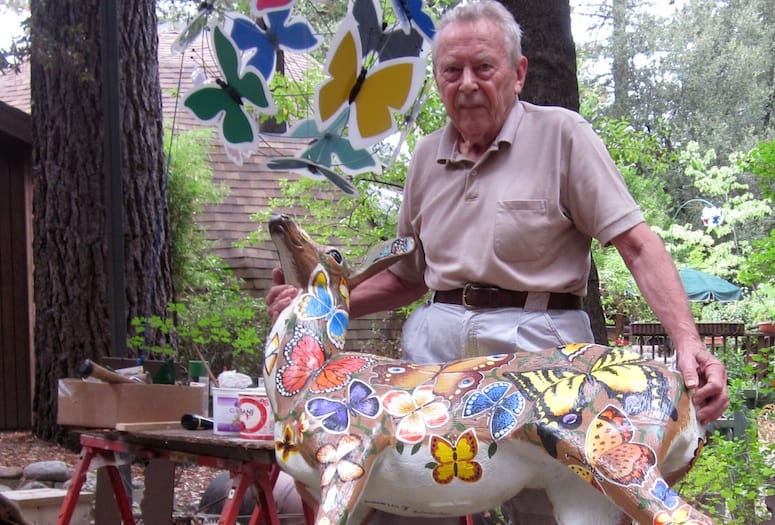 Growing up in Holland, Jan Jaspers-Fayer was fascinated by the growth process of butterflies from a ravenous larva to the spectacular monarch.

So it was only fitting that a multitude of butterflies would decorate his doe as part of the “Idyllwild Deer Sightings” Project to be unveiled Sept. 15.

The official “herd gathering” is free and runs 11 a.m. to 1 p.m. outside Forest Lumber Co. in Idyllwild.

Jaspers-Fayer doesn’t know how many butterflies he’s painted on his doe. There’s some on the muzzle, in the ears, and covering each flank. Some are recognizable like monarchs, and blue ladies, while others he just made up.

“But the legs are too small, so I painted caterpillars on them,” said the 83-year-old sculptor, who has lived in Idyllwild for 33 years.

Like the Cows of Chicago, and the Bighorn Sheep of Palm Springs, these artistic deer will grace the mountain town of Idyllwild.

Overall, 22 Idyllwild artists agreed to paint bucks, does and fawns for the “Idyllwild Deer Sightings” Project, the first of many public art projects by the Idyllwild Art Alliance.

“Not only is the art amazing, but the spirit of the community is amazing,” said Shanna Robb, event coordinator.

Photographer Kathy Harmon-Luber, who was used to seeing hundreds of deer in her native Pennsylvania, wrote a poem to her doe, she affectionately calls, “Dottie.”

She applied the paint in dots instead of brush strokes. The sculptures are made of cast aluminum, but there is lots of texture that caused Harmon-Luber to rethink her design.

Originally, she imagined water lilies and dragonflies at Lake Fulmor. However, when she applied them, they just disappeared.

Her final image, which took 33 hours to complete, shows birds, water and the San Jacinto Mountains. Room Enough for a Band

“I wanted to arrange a brass band onto the deer without ‘squishing’ them,” she said.

Welch managed to include seven musicians and their instruments, including a tuba. She used the deer’s neck and legs to extend a few torsos (pictured right).

Because of nearly a week of rain, Welch hasn’t finished painting her buck

By contrast, Jaspers-Fayer had his butterfly-clad doe done two months ago, before the town’s annual Fourth of July parade.

“We put it on a flatbed truck, with a couple of unfinished ones, and got more artists involved in the project,” Jaspers-Fayer said.