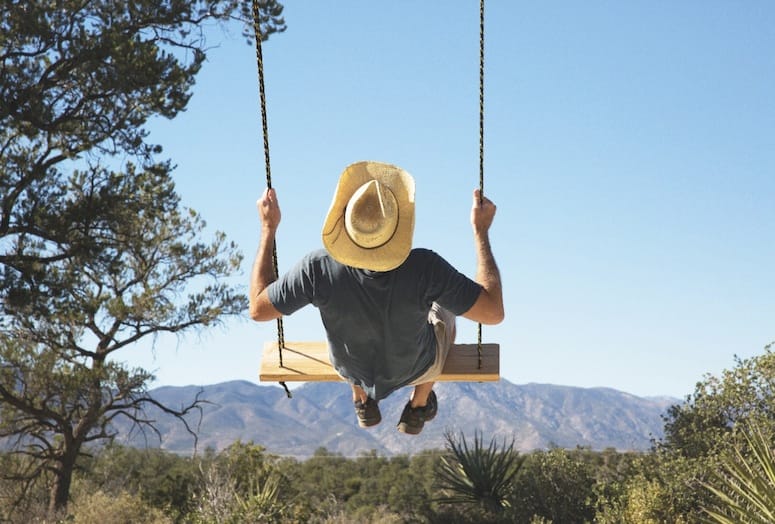 New friends who are just getting acquainted might invite each other over for dinner and drinks. Normally, however, they don’t chip in on a ragtag piece of property and start building a collective life together. The “Makers” of Makerville have a habit of doing things a bit differently.

On a quest for cost-effective joint studio space in a beautiful, natural setting, three artistic couples created a model for better living. Bonded by a desire to make things by hand, they blend the carefree spontaneity of days at summer camp with adult-style dinner parties and a mountaintop studio that nurtures their endeavors. A feast in Makerville joins Makers  with friends and fellow artisans. (Below) Kurt Cyr’s small-batch Bespoke Gin is born of juniper berries he collects on the trail.

Welcome to Makerville. Population: six. Celebrating its one-year anniversary, this intentional community in Mountain Center explores the concept of group utopian living. While many people view Palm Springs as the ultimate escape, this group finds it refreshing to change their scenery. The Makers emphasize that this is not a second home, but rather a “home-adjacent.” Each couple maintains a desert residence home and a mountain residence home, and both are home. As artists do, they shopped around in Joshua Tree and Yucca Valley first, eventually discovering respite off Highway 74. “Together we all knew it was magical, but we didn’t have an end goal,” says founder Richard Hovel. “It was an Elks’ retreat before we found it. When you get a lot of people up here, the space really resonates.”

This authentic family of friends is knit of common values, shared interests, working in tandem, and a resounding question they’re determined to answer at an elevation of 4,000 feet: “Where have all the hobbies gone?” Their conscious kinship is made official on a banner that bears their manifesto. Hanging off to one side of the front door, it begins: “Make something (a friend, a meal, a work of art, a better mousetrap) every day.”

They’re serious about the mousetraps. Shortly after the group snatched up the former Elks Lodge set on 10 acres that border national park land, they walked around with mugs of coffee, marveling, “Can you believe we own this?” A sense of stewardship for the scenic terrain grew on those morning  walks. Indoors, something less pleasurable was growing. Debra Hovel helps a student from her shoemaking workshop with the final touches on his new pair.

When the Elks vacated 15 years earlier, new critters moved in and repopulated. Undoing the infestation was the first order of business. Task complete, the Makers (along with friends who pitched in to help) filled four dumpsters, even while salvaging everything they could. Next up was new plumbing and electrical work and enclosing the former picnic pavilion to create the studio and common living space. They they opened up the kitchen and turned the Elks’ former bar into an adjoining open dining room.

The installation of the kitchen cabinets and stove was a turning point for founder Kurt Cyr. “As much as a working studio was the original intent, there was something very warm and fulfilling about knowing we could cook here,” he says. And cook they do.

The artists have pooled their supplies, which stand at the ready on mobile work tables. A student’s pair of custom leather loafers.

Gatherings flow from the making and sharing of meals into collaborative work in the studio, where the artists have pooled their supplies into a veritable toy box of tools at their disposal. Evenings pass with music, billiards, and games around the crackling cylindrical fireplace. Communal spaces blend with private sleeping quarters for the ultimate experiment in getting away from it all.

“This all evolved in a purely collaborative fashion,” says founder Trevor O’Donnell. “This isn’t any one person’s effort or vision.” Each Maker has put vision and hard labor into building a rustic hub of creativity and communal living. (Above) Ceramicist Jim Abele at his wheel in Makerville. (Below)  Debra’s famous Makerville Pie.

The lodge vibe remains intact amid the reimagined design, whipped together on a shoestring budget. Sleeping cabins are prefab sheds now paneled and insulated. Metal garage cabinets and IKEA pendant lamps finish the kitchen, complete with a repurposed demonstration mirror. The Makers built much of the furniture by hand, from a massive dining table and a banquette for spillover seating to a butcher block island the size of a pontoon boat. Mobile artists’ work stations on wheels hold piles of shoe leathers, wet clay, and a partially refurbished chair. The group finds profound simplicity in letting days unfold organically. They’re up with the sun, down with the sun, and not above afternoon naps. They don’t manically check their phones. They adopt new forms of assessing accomplishment. The warmth of the environment is so conducive to “making,” it compels even guests to act on the credo. In visiting, they become honorary Makers. “It’s exactly what we imagined it would be,” says founder Debra Hovel. “The spirit of collaboration is overwhelming. It makes you feel alive.”

Out back, a swing looks toward the mountains across hiking trails and desert wilderness. In the fire pit, sticks form a teepee. Out front, the Hovels are remodeling a 60-foot trailer as a small residence. Founder Jay Zaltzman notes that their sanctuary sat for months unsold. “I see the signs on the edge of the land that tell us we’re surrounded by national forest and I think about how lucky we are that this property wasn’t useful to anyone else,” he says.

Here, the moon looks bigger and ideas get bolder. Hugs come naturally and often. Laughter bursts out like a fireworks finale, one round after another between pops of banter and good-natured teasing. The Elks’ former picnic pavilion includes artists’ work stations and a billiards table along with the original fireplace.

To label it “glamping” feels contrived. “Community living and affinity gatherings have been on our radar for 10 or 12 years,” Debra says. “Naturmenschen, lebensreform, or, in today’s terms, ‘lives in balance.’ We want to surround ourselves with creativity and with people who share our beliefs.” Her husband agrees. “I can easily see how this can become a place we retire,” Richard says. “Being by ourselves was of no interest to us. It’s better than the sum of its parts.”

Makerville is less a “group home” than a group ready to watch over one another as they age. If they age. The fountain of youth may run through these faucets. “We’re like a bunch of kids building a fort, but no one tells us it has to come down before dinner,” says founder Jim Abele. “We’ve had so much fun. And so many injuries!”

Away from Makerville, Abele observes, each Maker has traveled and had a career. “We’re still professionally engaged, but now we’re returning to play. We’ve created a supportive space to decompress and be among friends. It’s really about having a fort to hang out in.” Watching the moon rise is  a Makerville ritual.

Each founder feels increasingly drawn back up the wild, blind curves of Highway 74, like swallows that fly back home.

The artisans plan to fund the future of Makerville by opening it up as a destination for weddings, events, yoga, retreats, film, and photography. Ice cream socials, pancake breakfasts with a hike-if-you-like option, and Makerville Markets showcasing handmade goodies are other anticipated revenue streams, as are Makerville Presents workshops. These allow resident and visiting artists to teach their skills, thus expanding the reach of the Makerville mindset. The sleeping cabin interior is simple and cozy.

What gives this old lodge so much life is the vision to leap outside the lines. “We’ve crafted the life we want very proactively,” Debra says. “It’s a work of art and a work in progress.”

That doesn’t feel like work at all, of course.

“The best feeling is waking up at 3 a.m. and walking out of the shed to see the stars,” says O’Donnell. “When you live in cities, you forget what the sky is like at night. Sure enough, it’s spectacular.”

Adds Debra, “The Milky Way is right on top of your head.” One studio, three couples, six extraordinary individuals on a personal mission to “make something every day.” To them, you are what you make.

Richard Hovel: Hovel’s driftwood sculptures are represented locally by Flow Modern. Recently this artist and graphic designer also built the dining table, reconditioned the pool table, made the manifesto banner and silkscreened shirts, and turned an old piano into a bar and karaoke hub. www.flowmodern.com/ richard-hovel

Jim Abele: A professional actor for 30 years, Abele commutes between television and film work in Los Angeles. To unwind, he savors studio time in ceramics. Find his vases and vessels at Just Modern. www.jimabeleceramics.com he Makers designed and built the dining table and banquette.  Pendant lamps from IKEA. Handmade pots by Jim Abele. The Hovels are renovating a 60-foot trailer that neighbors the main lodge as a fully functional residence. The back patio faces a firepit.