Craig Deman photographed this inflatabe chick artwork painted by Julia Curylo of Poland as part of The Desert Projekt.
PHOTOGRAPHS BY CRAIG DEMAN

Photographer Craig Deman has been shooting the desert for many years now. His black-and-white images show the dramatic contrast between land and sky.

“There’s only so many ways you can photograph the desert,” says Deman from his home in Palm Springs. He often looks to the desert for inspiration, and divides his time between Palm Springs and his working studio in Santa Monica.

To add interest to his desert landscapes, Deman would sometimes include props, such as a 1950s beauty shop chair with a hood. He dubbed the chair, “Marilyn,” after Marilyn Monroe, and would take the chair to obscure locations, such as the desert and city streets. The series took a few years to complete and spanned several states. The concept is similar to the famous book, The Red Couch: A Portrait of America, in which the photographers took a vintage red couch everywhere in the United States, from atop skyscrapers to down in the Grand Canyon.

Besides the “Road trip with Marilyn” series, Deman also shot a series on drive-ins in the desert. He liked documenting the historical significance of a dying business.

About a year ago, Deman wasn’t looking for a new series, yet came across a painting in a Santa Monica newsletter. The image belonged to Polish painter, Julia Curylo. He looked up her work online, and discovered that they both had created space images. His was done with digital photography and hers with paint. They also had shared past artist-in-residences in airplane hangars in Santa Monica.

For the next several months, Deman and Curylo got to know each other online. At the time, Curylo was showing in New York and various cities near Warsaw. She was working on her “Chicks” series of painted inflatable sculptures in the shape of chickens, or chicks.

After about six months, Curylo agreed to visit Deman at his home in Palm Springs. “She’s pretty fearless coming to Palm Springs and staying with someone she only knew online,” says Deman. “But she’s always been a risk-taker. You can see that in her art.”

Many of Curylo’s paintings include a twist on religious motifs. For example, she would create a painting of the Virgin Mary, and include an inflatable sheep nearby.

Curylo arrived in Palm Springs, with all of her chick, sheep and flower inflatables packed into one oversized suitcase.  “I can’t believe they all fit,” says Curylo, over the phone from Warsaw. 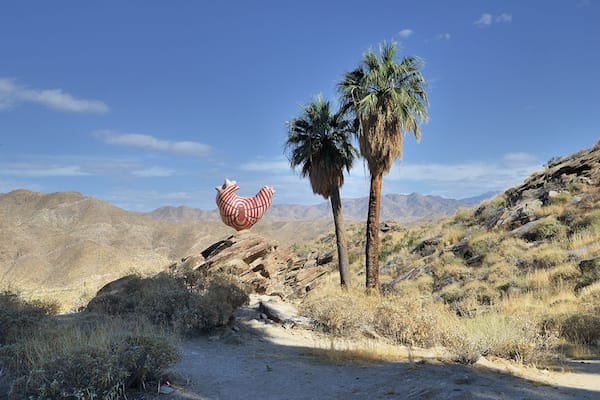 Upon her arrival, The Desert Projekt took shape. It is a creative collaboration between Curylo’s colorful inflatable sculptures and Deman’s black-and-white natural desert photography.

Although the inflatable chicks were normal in size for inflatables, about 3 feet by 4 feet, Deman staged them in a way that they looked larger than life. Many of the photos were shot in and around the Coachella Valley, during the day and nighttime hours.

The end result is that the inflatables grab your attention, and the desert landscape keeps you lingering at their natural beauty. It’s a contrast between manmade and nature made. It was fascinating for Curylo to see her soft inflatables juxtaposed against the harsh desert landscapes. This was the first time she had seen a desert.

“Deserts don’t exist in Poland, so it was fascinating to see them firsthand. Craig knew where to go, all the best places to shoot the chicks,” explains Curylo.

She found a company in Poland that could recreate the shape of her young chick in inflatable plastic. Curylo would add another artistic dimension by painting colorful images onto the plastic. Some were homages to other artists, such as Mexican painter Frida Kahlo and Georgia O’Keeffe, one of the most significant artists of the 20th century. 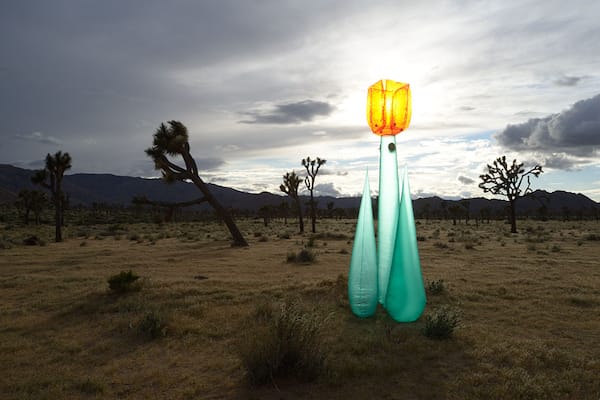 Since then, Curylo’s chick sculptures have evolved from inflatable plastic to inflatable metal, which are more sturdy and saleable. “The chicks are a play on words, because sometimes women artists are not taken seriously,” Curylo explains.

Besides the inflatables, Curylo brought along some of her oversized paintings as props for the desert landscapes. “It was interesting to see her space paintings propped up against a boulder in the desert,” says Deman. “But it worked.”

At this point, Deman and Curylo’s desert landscapes series has only been shown online. They haven’t displayed them in a gallery in the desert or elsewhere. “Julia is looking into showing them in Europe, while I'm looking for a space here,” says Deman. The challenge is finding a big enough space to showcase all of the large format works together.

Since returning to Warsaw, Curylo has been working on the next phase of the ongoing Desert Projekt. Her new series of paintings is based on her desert impressions over those 10 days.