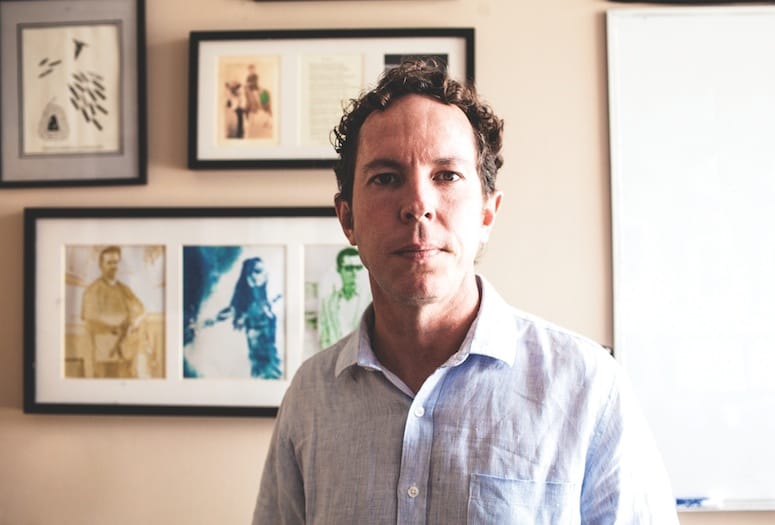 If it hadn’t been for some of the shady characters Matt Nix met while growing up here — certain people whose questionable activities and past misdeeds were chucked at the city limits — we never would have been introduced to Nix’s criminally inspired hit TV series, Burn Notice. (Arguably, the characters in Burn were spies, but as Nix notes, “all spies are really criminals. They do things they shouldn’t in pursuing their jobs.”)

During the time Nix spent here as a young boy during the 1970s, he seemed to constantly run into criminals. It wasn’t bad parenting. His own folks were exemplary.

Their neighbors and some of the parents at his Palm Valley School alma mater were sometimes horses of a different color. They provided a lot of the fodder for the cannon Nix used to blast Burn onto the USA Network for seven popular seasons.

But while Burn may be his best-known series, Nix is not one to take a dirt nap on his laurels. Since creating the show in 2007, which aired original episodes through 2013, he also developed The Good Guys, the 2010 Bradley Whitford–Colin Hanks buddy-cop series for Fox. He also just completed work on the Billy Crystal–Josh Gad FX comedy The Comedians. This summer, he introduced America to another universe with Complications, a thriller on USA about an emergency room doctor caught up in gang warfare.

The fate of these efforts beyond their initial episodes is unknown, but Nix is nothing if not sanguine about the ratings system that decides whether a show dies or lives to shoot another day.

“Some people don’t find a show right away,” he says, by way of explanation for the slow starts of Guys and Comedians. “Besides,” he adds, “in today’s TV world, there is a new kind of logic on what it takes to be picked up and succeed.

“In the broadcast era of the 1980s, it was how many eyeballs were watching. Today on cable it can be a smaller audience, but if the fans are enthusiastic enough about the show to want to burn down the cable company if they don’t see it, that’s worth a lot.”

While arson may not be on the minds of many viewers of basic cable, it was certainly one of the crimes that Nix learned about on the cul-de-sacs of Palm Springs growing up. Nix fairly revels in telling the tales of his naughty neighbors and what he learned from them.

How is it that you grew up in Palm Springs?
My dad, Philip, was the headmaster at Palm Valley School. It was very small, and he really built the school up. At the time, the whole valley was ceasing to be a seasonal community and there were more kids around. My mom, Susan, helped with the development of The Living Desert. I left Palm Springs after grade school; Dad went on to be headmaster at a school in Sonoma and we went up north.

Your great-grandfather was Harry Chandlee, who’s famous as the screenwriter of the 1941 Gary Cooper movie Sergeant York.
I never knew him, of course. He died many years before I was born. But I grew up interested in the industry because of him and other relatives. My great-aunts and uncles were in the business and so I grew up around it. Matt Nix in his youth in Bermuda Dunes.

Did they encourage you to go into the movies?
Absolutely. The nice thing was that when I decided, after going to UCLA, that I would become a lawyer, they all talked me out of it. They knew that (show) business had gotten them through the Great Depression. They were unfazed that I wanted to ditch the law career and go into show business. They knew I was going into law for all the wrong reasons.

So, phew, one less lawyer …
My great-aunt was a publicist from the 1940s to the 2000s. She was originally with MGM and repped every star, knew everybody, and at the time she died was still working. She had her own firm with clients like Tom Selleck, Gena Rowlands, and Sam Elliott.

I began writing and producing short films. In fact, one of them ended up at the Palm Springs short film festival, a great place for people to see your work. One of my films, Chekhov’s Gun, did well and got me my first screenwriting job.

Where do your ideas come from?
I know this is going to sound mechanical, but I owe a lot of my ideas to some of the people I grew up around in Palm Springs.

Go on …
I trace a lot of my fascination with crime from living in Bermuda Dunes. Our next-door neighbor was my pediatrician, and his son and I played together. His mother was a Seventh-day Adventist and his dad was a secular Jew, and since the son was an only child, I was always brought along with the family on trips.

Sadly, however, the doctor and his wife decided to get a divorce and there was a bitter custody battle for the son. So what does he do? Clearly, the best thing in his mind to do was to hire a hit man to kill his wife. Only he didn’t really know how to do that and ended up hiring an undercover cop. Then the lawyer bills piled up and it got expensive, so what did he do in a case like that? Why, he burned down his office for the insurance money. And, again, he really didn’t understand the mechanics of doing that, so the fire department figured out it was arson.

All this time, I was paying attention. I was interested in the mechanics. I kept looking into it. I love studying the process of things. You incorporate a lot of that in your work. Burn Notice contained a lot of what you call “script math,” where the narrator explains how something is done. There’s the classic example of how to go to a meeting that someone else has arranged (don’t do it) and another on picking the location if you think you’re going to be attacked (meet in a bathroom, lots of hard surfaces). Are these the kinds of things that you learned in Palm Springs?
I’ll give you another example of the crime I saw around me when we lived in Palm Springs …

This is real Chamber of Commerce stuff. Continue …
I remember I was in the fourth grade and my dad told me that there would be a fundraiser for the school where he was the headmaster, and we went up to this palatial mansion where some young girls were lip-syncing to records. The records were all warped from the desert heat and so the girls had to sync in a warped way. It was actually funny but really terrible too. The next day, a guy showed up at school with $600 in cash raised at the fundraiser. We found out later that the guy was arrested by the FBI. He was the head of the Palm Springs Mafia.

This is great. Got any more?
Oh, yeah. When I was in fifth grade, my little sister’s best friend’s dad was the heir to the Hancock Oil fortune. He was kind of a blustery guy; he liked taking us out to dinner. One day, he disappeared and a little while later the FBI showed up at the school. Turned out this guy was not the heir to any oil fortune. He would just travel around, find empty houses, forge documents, and then pretend to be the owner. He landed in jail and I heard that while he was there, he made friends with the cook and they escaped.

How did you hear all of these stories?
We would be invited to people’s homes for dinner and I found that if I asked the grown-ups about their lives and really listened, I wouldn’t have to sit at the children’s table. I was like a sponge.

Have you ever wanted to do a movie or a TV series based on these Palm Springs experiences?
It’s funny, but Palm Springs was part of my first movie pitch. In the third grade, my dad told me the story of The Iliad, about these people attacking a walled city. It reminded me of the gated communities all around us. So I wrote a story about how Rancho Las Palmas went to war with The Springs after Priscilla Presley got kidnapped. The horse became a golf tournament. I worked it up as a pitch and sold it to a studio. It was called Inland Empire.

Will we ever see it?
Probably not. The studio changed hands and it disappeared.