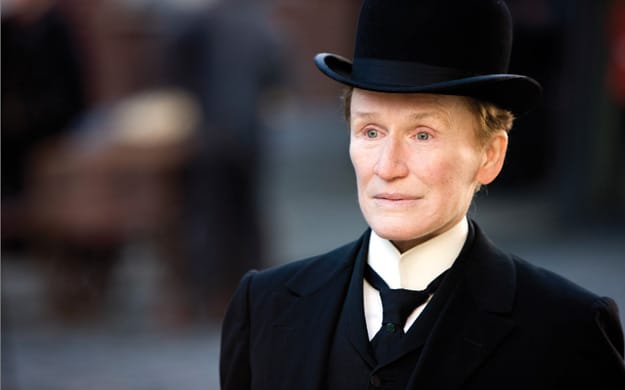 Irony may be Glenn Close’s best friend. The Hollywood Reporter revealed in October after a trailer of her latest film, Albert Nobbs, hit the Internet, “Close is considered a potential Oscar nominee for her role.” Irony comes into play because the nature of the role lends her unrecognizable as Glenn Close.

In the movie, released in December, Close plays a woman passing herself off as a middle-aged male butler in 19th century Dublin, Ireland.

“It was a part that I loved,” she says. “It’s so complex and yet basically a simple story about incredibly complex issues. It’s about a woman surviving.”

After five previous Oscar nominations — The World According to Garp, The Big Chill, The Natural, Fatal Attraction, and Dangerous Liaisons (all in the 1980s) — this could be Close’s year to wrap her hands around the statuette.

Close has been angling to perform a film version of the title role in Albert Nobbs since playing the part on stage at Manhattan Theater Club in 1982. The off-Broadway role won her rave reviews and an Obie Award. “It was an intimate telling of the story,” Close says. “Every night, I was aware of how the story emotionally blindsided people.”

She took matters into her own hands to bring Albert Nobbs to the big screen. She helped write the screenplay, adapted from a short story by Irish author George Moore, with Man Booker Prize-winning novelist John Banville and Gabriella Prekop, And the movie may not have been made if Close hadn’t invested her own money into the film, she says. Associates, friends, and family (including her husband) also invested.

“How can I ask people to put their money in it if I’m not willing to put my money in it?” asks Close, who understands the challenges of getting a small-budget movie made. Eventually, it was filmed in 32 days for a little more than $7 million.

In her effort to get the movie made, Close “had been in the offices of every single independent film company at least twice,” she says. “My definition of an independent film is a film that almost doesn’t get made.”

Film festival Chairman Harold Matzner says Close “revives a stage role and brings it to gritty life in yet another bravura performance.” Her “gift of mesmerizing an audience,” is among the reasons Matzner and festival programmers sought Close for the Career Achievement Award, which has previously gone to Cate Blanchett, Robert Duvall, Clint Eastwood, Morgan Freeman, Samuel L. Jackson, and Helen Mirren.

“With Albert, the window out of her disguise is her eyes,” Close says. “And it was a huge challenge to figure out how much to show at any given time.”

Her ability to meet that challenge could possibly set up a competition between Close and Meryl Streep, who could get the nod for her role as Margaret Thatcher in The Iron Lady. Some movie reviewers had all but handed the Oscar to Streep. But with Albert Nobbs receiving positive reviews, some have called for the Oscar to go to Close.

While enjoying the acclaim, Close looks toward new opportunities. “Anything goes now that I don’t have Albert Nobbs to pull off,” she says. Knowing that audiences finally have an opportunity to see the movie, she says, gives her a “great sense of fulfillment and closure. I believed in the story, and I never stopped believing in the story.”