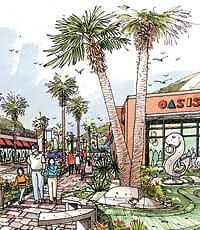 Gerald (Jerry) Fogelson, developer of Chicago’s largest ($3.5 billion) mixed-use real estate development, has big plans for Indian Wells. The Chicago developer, who lives part time in Rancho Mirage, will transform 39 acres of land at the intersection of Miles Avenue and Highway 111 — the long, vacant parcel of land adjacent to the wash — into an oasis of lush landscaping that surrounds pathways, as well as bike trails, with fountains and sculptures.

The development, to be known as Miles Crossing, will include 150,000 square feet of fine retail shops and restaurants, as well as a residence club hotel operated by Fairmont Hotel.

“Our vision is to create an elegant development that will be part of the renaissance of Indian Wells,” says Fogelson, noting that the site extends east from Renaissance Esmeralda Resort and Spa to Indian Wells Senior Center.

Miles Crossing is integral to the city’s  master redevelopment plan, which calls for transforming up to 600 acres and redesigning Indian Wells Golf Resort’s clubhouse and golf courses. Indian Wells has budgeted more than $20 million for this work.

The highlight of Miles Crossing will be a condominium residence hotel with more than 100 units with lock-off options netting about 178 keys (owners not occupying their units may choose the lock-off option or place the unit into the hotel rental pool for income). Amenities will include concierge and housekeeping services, three pools, a health club, and a full-service restaurant.

As with traditional condos, ownership will be single-deeded. Furnished, two- and three-bedroom units range from 1,500 to 2,800 square feet. At the heart of the residence club will be a three-story lodge and adjacent casitas. Single-story casitas, two-story town homes, and units within the lodge will be available. All offer views of the Santa Rosa Mountains, Mount Eisenhower, and the golf course.

Sophisticated fashion and elegant home-furnishing retailers without an existing desert presence have been pinpointed as potential tenants for the space, which will include as many as four restaurants. Retail and restaurant parking will be on a lower level. Winding paseos will connect Miles Crossing, Hyatt Grand Champions Resort & Spa, Renaissance Esmeralda Resort and Spa, and the golf resort.

The site comes with several challenges. The long, narrow land restricts development and design options. It also extends east and west of Miles Avenue. However, Fogelson’s track record instills confidence about the land’s transformation. A member of Chicago’s Real Estate Hall of Fame, Fogelson began his real estate career in 1955 and has developed numerous apartments, shopping centers, industrial parks, and mixed-use communities throughout the United States. He is the namesake of Gerald W. Fogelson Forum at Roosevelt University and co-founder of the prestigious Chicago School of Real Estate.

“We’re designing a contemporary desert oasis,” says Rob Parker, RGA’s principal and designer. Don’t expect a typical desertscape, he intones. RGA will use a lush desert plant palette with new materials planted in untraditional styles. This means loads of color   supplied by Texas Rangers, lantana, and bougainvillea. These will be accented with desert plants like agave, desert spoon, and  deer grass. “We want everything to grow in its natural form.”