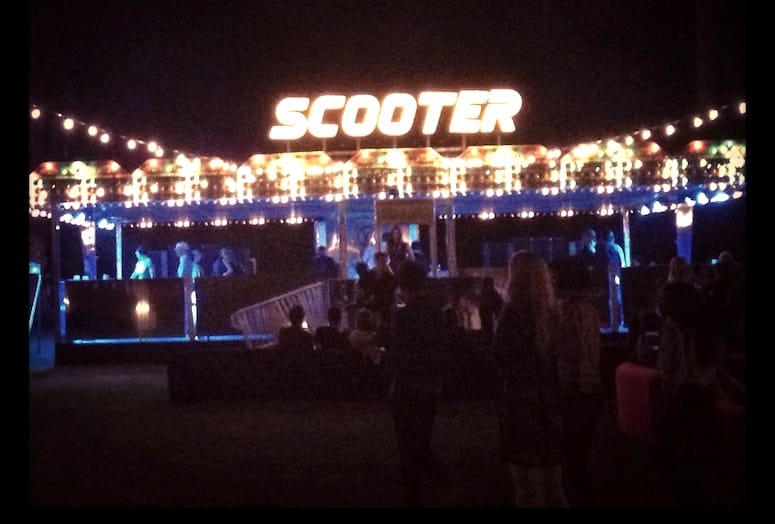 "Scooter" resembled a carnival, brimming with lights everywhere and pulsating loud music at the afterparty for Louis Vuitton on May 6 at the Parker Palm Springs.
Photos by Arianna Menon

These were few of the many comments that followed the unveiling of the Louis Vuitton’s 2016 Cruise Collection at the after-party on May 6 at the Parker Palm Springs.

The whole resort became the playground of enthusiastic fashionistas conversing about the futuristic looks presented at the iconic Bob Hope Estate. Bloggers, reporters, executives, clients, and models who were visiting Palm Springs for the first time looked and sounded très chic while chatting in French and sipping champagne. The Parker’s grounds served as the perfect elegant background, boasting French bistro-style tables adorned with candles and soft colored flowers, white couches, and an attentive staff of white suit-clad servers who all actually were male models.

The music was just perceptible, allowing the guests to exchange opinions and information about each other’s outfits as they sampled Mexican-influenced cuisine or roasted s’mores in the bonfire area (not very French, but fun indeed).

But the party was taken to another level when the doors to “Scooter” opened around 9 p.m., revealing a different vibe and festive scene. Located in the furthest part of the Parker’s grounds, "Scooter" resembled a carnival, brimming with lights everywhere and pulsating loud music. The arcade claw was filled with Louis Vuitton wallets.

Bumper cars, huge 1980s-style video games — including Pac-Man and pinball machines of all kinds — and a vintage disco ring were so masterfully displayed that it appeared they had always belonged to the Parker. However, the “LV” logo placed everywhere was a reminder that this wonderful fantasy world was indeed just another illusion created by the luxury fashion house. One example was the arcade claw; it normally contains stuffed animals or jewelry, but at Scooter it was filled with Louis Vuitton wallets. Oh la la! Photo opps with vintage bumper cars with the LV logo on them were available in the sitting area, which was dotted with long red couches and fire pits. Cigarette girls and boys carrying turkey sliders, fries, and more champagne complemented the extravagant soirée.

No, actually, Kanye West topped off everyone’s experience by showing up at the carnival and dancing the night away.