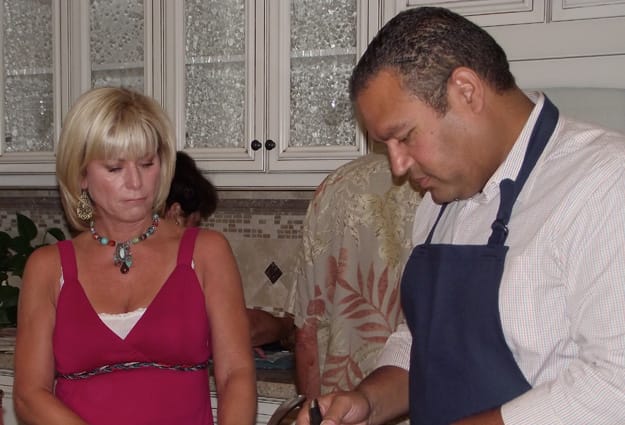 Desert residents have been venturing throughout the world in groups from the comfort of their homes. In Indio, about 16 women took a “Tour of Italy” at the end of August. The next night, 10 women and eight men in Palm Desert sojourned forth on a “Tour of South America.” Robert Velez, owner of Cooking Made Easy The School, led both expeditions.

Based in Wrightwood, Velez has been coming to the Coachella Valley for the last four years with a carload of cooking equipment, cutting boards and pans, serving dishes, and food to guide groups of eight to 20 in a kitchen or around an outdoor barbecue. “Tour of” menus include such fare as Tuscan dip (Italy), arañitas con mojo criollo/green plaintains with garlic sauce (Caribbean), beignets (Louisiana), chicken and apricot phyllo pie (Mediterranean), sopa de yautia/Brazilian sweet potato soup (South America), and potage Saint-Germain/fresh pea soup (France).

Right now, it seems like Spanish food is the rave,” Velez says. “I have done a lot of tapas sessions lately.”

“What I have found over the years is that my sessions change, the groups change, and people’s tastes change. … I add two to three sessions per month, and I also get rid of some as they get old,” Velez says. There’s even a session “Just for Men.” www.cookingmadeeasytheschool.com.