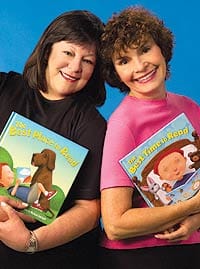 When children’s authors Debbie Bertram and Susan Bloom learned a documentary was being made about the Santa Rosa and San Jacinto Mountains National Monument, they saw a complementary opportunity to educate local youth.

“We got wildly enthusiastic and excited,” Bloom says. She and Bertram have been working together for six years and moved to the Coachella Valley from Los Angeles  a couple of years ago with their husbands. “We basically came out here because of golf courses and beautiful manicured lawns and flowers,” Bloom continues. “But what we love [now] is the monument and the rugged, natural beauty.”

That love grew during their research for A Monument to Treasure, a book geared toward children 8 years and older that talks about the flora and fauna of the monument and carries a message about the need for conservation.

“That’s really the point of the book,” Bertram says, explaining how the book begins with a boy picking up a rock during a hike with his grandfather and ends with him putting it back where he found it after an enlightening exploration of his natural surroundings.

The writers — who previously co-wrote the children’s best seller The Best Place to Read and its new sequel, The Best Time to Read (both Random House) and City Hall: The Heart of Los Angeles (Tallfellow Press) — are just completing layout designs for  A Monument to Treasure (Desert Publications Inc.) with Palm Springs Life Art Director Stuart Funk. To illustrate the book, Funk created 24 paintings that will be auctioned during the book’s debut tour.

“Every painting we see, we are just so bowled over,” Bertram says. “He is so amazingly talented. I don’t think we’ve ever had this much fun [on a book project].”

“When we got to the top, it was cool, breezy, and we had 360-degree views,” Bertram recalls of the latter visit. “We said, ‘It doesn’t get any more beautiful than this’.”

“We were truly inspired,” Bloom adds.

The book — being released Oct. 22 in conjunction with the national monument’s fifth anniversary and the premiere of the documentary Voices of the Monument — highlights the vegetation and critters within the national monument and relates the importance of the mountains to the native Cahuilla Indian culture.

“We purposely put in three Indian legends,” Bloom says, “and we talk about how the Cahuillas were really so wonderful at using the land and using what was around them to survive.”

A foldout in the book illustrates the five distinct life zones that make the monument unique. The authors were able to point out the variety of vegetation and critters in those zones when they took Bertram’s grandchildren on the Palm Springs Aerial Tramway.

“Because of our knowledge, we enhanced their experience,” Bloom says. That’s what she and Bertram hope to do for others through their book. “We wanted to write it young enough so that elementary schoolchildren could read it, but we also wanted to have enough information in it that older children could learn and appreciate it as well.”

The authors plan to present their book this fall in fourth-, fifth-, and sixth-grade classrooms and libraries throughout Coachella Valley. It will be available for purchase through Palm Springs Life and at the monument visitor center, local bookstores, and select tourist locations. A portion of the proceeds from book and documentary sales and the auction of paintings will be donated to the monument for preservation efforts.

“If we could help to instill conservation [in children],” Bertram says, “then hopefully as adults they would be passionate about protecting this natural beauty all around us.”

Copies of A Monument to Treasure are available for $14.95 from Desert Publications Inc.  The publisher seeks contributions to provide copies to local schools. To make a donation, or for more information, call 325-2333.