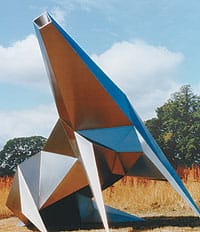 Late British sculptor Lynn Chadwick was an early bloomer, gaining fame at a relatively young age, 41, by winning the International Prize for Sculpture at the Venice Biennale in 1956, when the art world heavily favored Alberto Giacometti.

Chadwick died a year ago this month. He was 88 when he was preparing his first London retrospective at the Tate Britain — a 30-piece exhibition spanning 50 years, from his early mobiles to his anthropomorphic figures to his smooth and shiny beasts.

After the exhibition ended in March, several sculptures — including the larger-than-life-size seated Little Girl (1987) — returned safely to Palm Desert’s Buschlen Mowatt Galleries, which will unveil its significant collection of Chadwick’s work in a February 2005 show.

Chadwick was schooled in drawing and painting but began his career as an architectural draughtsman in London. He also worked on a farm and volunteered for the Fleet Air Arm. After World War II ended, he began creating elegant mobile sculptures of aluminum and balsa wood, and stabiles — one of which was feted at the Festival of Britain. His work joined static and mobile forms in major works, such as Fisheater (1951), and then incorporated chunks of glass into welded sheet steel forms in works like The Inner Eye (1953).

Buschlen Mowatt’s collection dates to Chadwick’s organic, textured figurative work of the mid-1950s, most notably The Orator (1956), and follows the artist’s evolution from his signature “block-head” figures of the 1960s to his highly polished and geometric series of Beast sculptures of the 1990s.

Chadwick’s figurative work drives comparisons to Henry Moore but also asserts his daring and innovative use of materials and experimentation with Bauhaus, Cubist, and Surrealist styles.

“He was a master at experimentation,” says Barrie Mowatt, who met Chadwick through a prominent French family associate and friend while developing the first Vancouver Sculpture Project (Buschlen Mowatt is celebrating its 25th year in Vancouver, British Columbia). “From his early days with mobiles to welding, to bronze, to stainless steel, he moved into these new mediums by himself — as an innovator in the process and with the material.”

After Tate Britain’s retrospective, auction sale prices in London and New York increased substantially, surpassing retail prices ($50,000 for maquettes to $1.6 million for monumental works). “For this to happen within a year of his death is more than I expected,” Mowatt says, “because [Henry] Moore’s prices didn’t start jumping for about five years after his death and by the 10-year mark, availability and prices had clearly made their move.”

Museum exhibitions will continue to raise awareness and demand for years to come.