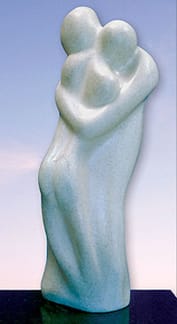 After 14 years in Palm Springs, Colin Webster-Watson — one the desert’s most talented and spirited visual and performance artists — will return this month to his native New Zealand, where he’ll be greeted by family and dignitaries, to whom he’ll present one of his favorite sculptures: Tail of the Wale. (He’ll also gift Gliding Through Atlanta to Te Papa Museum in Wellington.)

“It’s with radiating reluctance that I leave this beautiful valley and the many wonderful friends who have supported me as a sculptor, as a playwright and poet, and in my other endeavors as an artist,” he told an audience at Camelot Theatres after the Playwrights’ Circle Staged Reading Series performed a two-act play he wrote nearly 50 years ago.

“I became quite emotional sitting back there, watching this marvelous cast perform,” he added before inviting the entire audience — about 80 people — to his home/studio for supper.

Colin moved to Palm Springs in January 1990 on the advice of friend and patron Carroll Baker, who helped him cope with the death of his wife, Jane Ewing. He has since been a fixture in the valley’s art and theater scenes, exhibiting his sculptures in galleries and performing in countless productions and one-man shows. “He’s a treasure,” says Peggy Cravens, one of Colin’s most loyal collectors and supporters. “This valley will miss his tremendous talent.”

His July 15 departure will be bittersweet. Colin — who had also lived and worked in Rome, London, New York, and Acapulco — recalls one time he returned to New Zealand: “My father welcomed me home with such passion. He crawled on the floor begging me to stay. When he died, it was a terrible shock to me.” Their relationship inspired The Prodigal Son (pictured). The artist would communicate the value of family in several other pieces, most notably La Famiglia: “There is my father looking out to the future, with mother and son, holding the family together,” he beams.

Colin, 78, showed his work earlier this year at Robert Roman Gallery in Scottsdale, Ariz., and continues to sell his work through his Web site (www.colinwebsterwatson.com).