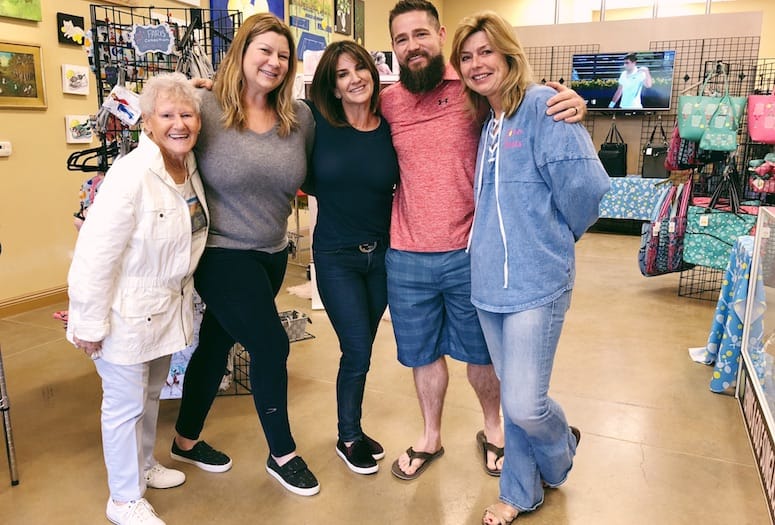 Her husband golfed. Jade Tammen-Nordness traveled for her job during the week.

Weekends meant important time together, and tennis became that shared experience.“We decided we needed to find a sport we could do together,” Tammen-Nordness says.

Little did she know that tennis would allow Tammen-Nordness to leave her job and open her own business, Cute Tennis Stuff.

“I had some ideas to make some products, started the creations, and put up a website not realizing that people wouldn’t automatically start coming to you just because you had a website,” says Tammen-Nordness, who lives outside of Atlanta. “I started to do some local tennis tournaments and then professional, and it has evolved from there.”

After spending the last seven years as a vendor inside the Indian Wells Tennis Garden, the tennis venue’s recent expansion of its grounds left her without a space to come back to. She and co-vendor Tony Rissley decided to give an off-site, pop-up store a shot, and then enlisted other vendors they have connected with over the years of working the tennis tournament circuit.

Cute Tennis Stuff and Friends opened recently in La Quinta about two miles south of the Indian Wells Tennis Gardens at the Washington Park shopping center. The store will remain open for the entire BNP Paribas Open. A grand opening event is set for 10 a.m. to noon March 11.

The store has many of the same items Tammen-Nordness sold at the tennis garden, but also allowed her to expand to include others.

“The ladies come in and they immediately see fun things for their tennis parties,” Tammen-Nordness says. “Tennis and wine go together very well. Typically on the grounds, people forget their sun screen, seat cushions, and they are looking for sports towels. Last year we sold 100 umbrellas in an afternoon becuase it was so hot. You can’t use them in the stadium, but you can use them in the gardens. So we have sections of needs and ones of all the pretty wants.”

In addition to items grouped together as a Tournament Survival Station, Rissley's contribution is tennis memorabilia including a corner of the shop dedicated to the G.O.A.T, defending BNP Paribas Open men's champion Roger Federer. (FYI, G.O.A.T. refers to Greatest of All Time).