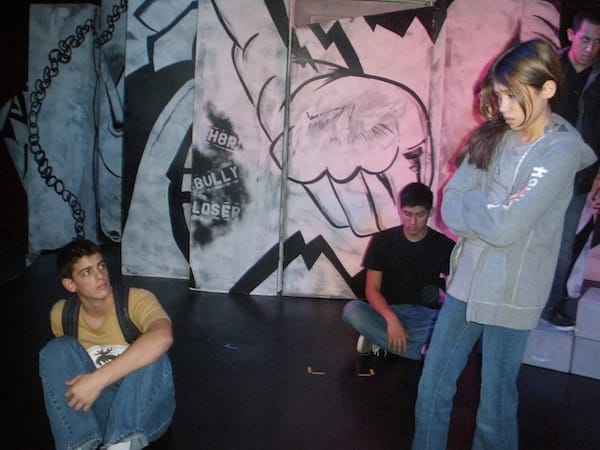 At one point in the play, Tori Thompson looks out at the audience and says, "Do I have a sign painted on my face that says, 'Get me?' "

Thompson, a freshman at La Quinta High School, portrays Helen, one of two characters in the play, "Thank You for Flushing My Head in the Toilet and other rarely used expressions", who are on the wrong end of bullying from their classmates.

The play is part of an initiative by the Rancho Mirage based Coachella Valley Repertory (CV Rep) in tackling sensitive issues like bullying on the stage using high school theater students to act out a series of situations in front of middle school student audiences.

The public is invited to view the play Friday (Dec. 7) with showings at 2 and 7 p.m.

Helen's desperate outcry is as much out of frustration as it is a telling fork in the road of what direction a victim will take to rid themselves of this awful burden. Helen decides to become a bully herself, giving in to the peer pressure to become part of the problem than the solution.

Her male counterpart, Bruce Collins, who plays Achilles, tries to follow the same path rather than succumb to having his head dunked yet again in a school bathroom toilet. However, the Desert Hot Springs High School junior can't become something he is not, and he senses his choices have led him to only one outcome.

Over the next week, more than 1,000 middle school students will be bused to the CV Rep to view the play thanks to grants provided by Newman's Own Foundation, Assistance League and The Pinnacle Fund.

The play was written by Jonathan Dorf, a Los Angeles-based playwright and screen writer who pens theatre specifically for student audiences. CV Rep Artistic Director Ron Celona worked with Dorf on another family-oriented project on the history of glass art.

Following the 30-minute play, audience members participate in a question-answer session with the student actors and discuss the scenarios that relate to their own school experiences. The intimate 86-seat CV Rep theatre, which opened in January, provides the perfect setting to let the audience feel free to participate in the exchange.

Thompson revealed that she has dealt with bullying herself to the audience after the Dec. 4 performance, which broke ranks by playing in front of a high school audience.

"When you say something negative to someone, it stays with them," Thompson said. "It just doesn't go in one ear and out the other."

Celona, who moderates the post-play discussion, could relate to being bullied while growing up in Philadelphia.

"I was a gay boy who definitely got bullied for that reason," Celona said. "I did things like feeling peer pressure and having a girlfriend, going through a whole three-year relationship just to fit in."

Children's outreach programs has been the foray for CV Rep to gain its foothold in the desert. This year marked the repertory's addition of adult plays with "Collected Stories", and the 2013 season begins with "Six Dance Lessons in Six Weeks" slated to run Jan. 23-Feb. 10. Celona said his goal is to produce six adult plays and two outreach children's shows each season.

"I believe the missing link in the Coachella Valley is the rep company," said Celona, who came to the desert in 1999, formed the Joslyn Players and helped transform the Joslyn Center Theatre into the Arthur Newman Theatre.

"We weren't ready for it 10 years ago," Celona continued. "We're ready for it now. There are enough Baby Boomers who are theatre-goers."