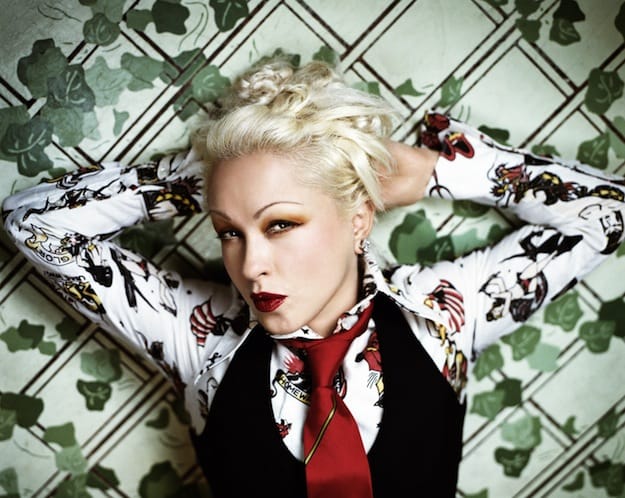 Cyndi Lauper, who was just in Palm Springs to headline the AIDS Assistance Program benefit, could make history at Sunday's Tony Awards.
cyndilauper.com

There’s little left to say about the genius of Cyndi Lauper, who was just in Palm Springs last month to headline "Evening Under the Stars", a benefit for the AIDS Assistance Program.

Since the 1980s, she has influenced the Billboard charts, legions of followers, and other musicians. However, Lauper’s latest endeavor primes to conquer another frontier: the annals of Broadway composer superstardom.

The Original Broadway Cast Recording of Kinky Boots delivers 15 energetic tracks, ranging in genres from rock to pop to dance music. The beauty of the soundtrack is that you don’t have to know the details of the story to enjoy the music; each song is a nod to the play’s characters, but also to the composer’s promotion of diversity, self-acceptance, and individuality.

Kinky Boots tells the story of Charlie Price (Stark Sands) and his attempt to save the floundering shoe factory he inherited from his father.  When a drag queen named Lola (Billy Porter) enters his life looking for some man-sized stilettos, she ultimately equips Charlie with the fire he needs to turn the shop — and his life — around.

Lauper’s confluence of the arts and LGBT community bursts from the closet in the song “Sex Is in the Heel”.  The song smolders with its disco melody and an unabashed celebration of stilettos. As well, her stamp creeps onto the baseline of “Charlie’s Soliloquy.” You hear tinges of “Time After Time,” one of Lauper’s earlier chart-topping pop hits. Fans are also sure to fall in love with her tough-talking, feel-good lyrics on “In This Corner.”

This project was Lauper’s labor of love; the self-professed “outsider” and activist spent three years creating each note and bar of music. Music supervisor and arranger Stephen Oremus helped shape Lauper’s work and its integration into the theatrical production.

The result garnered the production 13 Tony Nominations in April including Best Musical and Best Original Score. If Lauper wins Best Score, she’ll be the first woman in Broadway history to do so in that category — without the help of a man. That — dear friends — is how you stomp your way to glory.