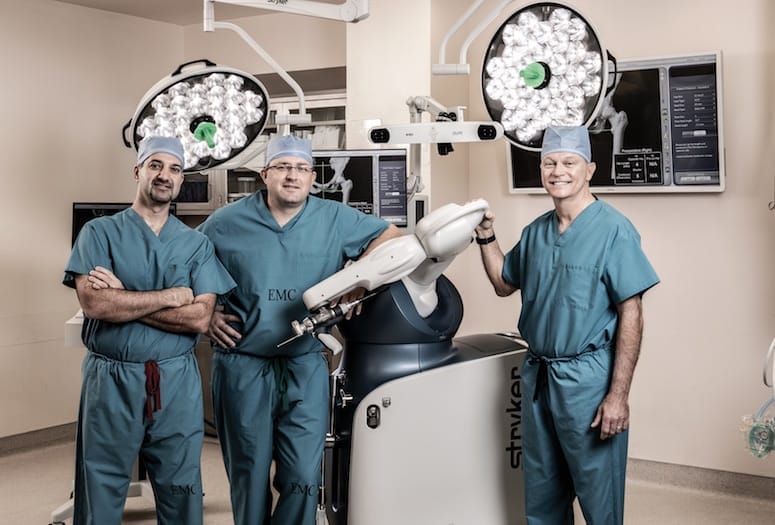 Fantasy worlds burst with the future of medicine. Sci-fi creators must weave healing technologies into their plots. After all, photon blasters, phase disruptors, and explosions in space tend to inflict immense damage on living beings.

Look it up. You can find medical technology that has stepped out of fiction into science fact. In 2017, Final Frontier Medical Devices won first place ($2.6 million) in the Qualcomm Tricorder XPrize competition for its handheld diagnostic tool inspired by Star Trek. (The Roddenberry Foundation committed to contributing $1.6 million to adapting winning devices for practical use.)

It was not a long time ago in a galaxy far, far away that the cutting edge of medicine was just that: scalpels giving surgeons access to internal organs. Only in the late 1980s did laparoscopy gain traction as a minimally invasive technique.

Undoubtedly the greatest tool with a science-fiction genesis, robotic surgical systems with camera guidance emerged in the 1990s. Enrique Jacome, M.D., was beginning his OB-GYN career with laparoscopic surgery. Then in 2000, the U.S. Food and Drug Administration approved, for general surgery, a robotic system clearly named for the Renaissance Age’s pre-eminent genius.

“I began to hear there might be a potential to use the da Vinci for gynecological procedures,” says Jacome, directing physician at Fleur Women’s Health in Rancho Mirage. “Nobody was doing robotic surgery in California,” he adds. So when Eisenhower Medical Center considered purchasing a da Vinci system in 2008, Jacome traveled east to train with a gynecologist at Mayo Clinic in Scottsdale who was the first doctor to perform robotic surgery in Arizona.

“When I came back, I said, ‘I am happy to lead the way. I will support this program fully.’ That year, I performed the first robotic surgery in Riverside County,” Jacome recounts.

“I encouraged other surgeons to adopt the technology. I was seeing amazing results. Patients had less pain, less bleeding, fewer infections, shorter hospitalizations, and faster recoveries. Everybody was happy. One by one, specialty by specialty, an increasing number of doctors at Eisenhower got trained in robotic surgery.”

Early this year, Jacome was nearing his 1,000th da Vinci operation, using the machine for more than 90 percent of his hysterectomy, endometriosis, and uterine fibroid surgeries and reserving laparoscopic procedures for small cases.

“The more complex the case, the more a patient is a candidate for robotic surgery,” he says, adding that robotics provide such a minimally invasive approach that he can perform operations on an outpatient basis.

“When I was starting, all the surgeons that trained me did open surgery,” he says. “By the time I was ending my residency, laparoscopy had taken over. In 2004, there was a big study [in The New England Journal of Medicine] that concluded laparoscopic surgery for colorectal cancer was an alternative to open surgery; and that really opened the floodgates to minimally invasive techniques.”

Gering admits that making the next leap — to robotic surgery — was more of an uphill climb.

“I had to go to Intuitive’s headquarters in Sunnyvale,” he recalls, referring to the da Vinci manufacturer. “You have to do simulations and then go to the lab. You have to watch other surgeons. After that, you can schedule your first case with peer-surgeon proctoring.” For Gering, that was in 2011.

“It’s the same surgery, but now you do it with a different tool,” he summarizes.

Jacome’s voice registers pride when he notes that Eisenhower became the first da Vinci training center in California outside of Intuitive headquarters.

“For some five years, we trained hundreds and hundreds of doctors from all over the United States,” he declares.

The da Vinci system works for a range of surgeries, but orthopedic surgeons need a machine designed specifically for joint replacements.

“There have been a number of changes [in orthopedic procedures] over the last three decades, but they have been minimal with different styles of replacements and approaches,” says Ghassan Boghosian, D.O. “It wasn’t until robotic technology came along that the process changed completely.”

In August of 2015, the FDA approved a robotic unit for knee and hip replacements that had been developed by Mako Surgical Corp. and manufactured by Stryker Corp., which acquired Mako in 2013.

“We now have the ability to plan and ‘perform’ the surgery before the patient enters the operating room,” Boghosian says. “Once I have a CT scan, I can build a 3-D model of the bone structure. At the end of my presurgery, I am looking at the finished product, if you will. Never before have we been able to achieve that from a planning standpoint. Then the robot and I execute the plan I have set forth.”

Boghosian learned minimally invasive techniques during his fellowship training at Ohio’s Cleveland Clinic and gained access to the Mako system once on staff at Eisenhower Desert Orthopedic Center.

“I am considered a high-volume robotic surgeon by Stryker,” he says in explaining why the Michigan-based company asked him and his colleague Erik Schnaser, M.D., to teach robotic surgery to the orthopedic community at large. “Stryker flies them out to Eisenhower to introduce them to the technology.”

Eisenhower Desert Orthopedic Center notes that it is one of the top five highest-volume centers in the nation for knee and hip replacements using Mako robotics. One of the group’s shoulder specialists, Patrick St. Pierre, M.D., is among five orthopedic surgeons in the world working with Stryker to help design software for minimally invasive, robotically assisted shoulder replacement.

• READ NEXT: How Eisenhower Health Got Jan Bulls Back on the Tennis Courts.