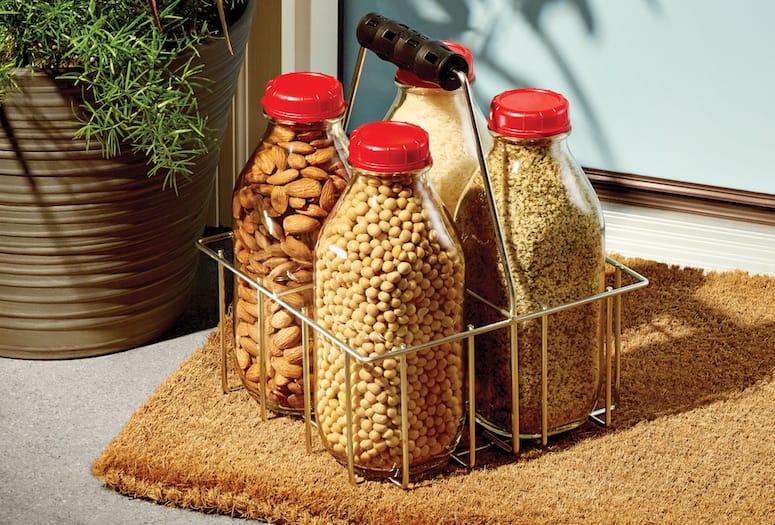 By now, you’ve probably heard plenty about the rise of plant-based eating — also known as a vegan diet — in which a person doesn’t consume anything derived from an animal. While most of us aren’t quite ready to take the plant-based plunge, simply cutting back on meat and eating more vegetables can be good for our health (though many cite animal rights as an equally if not more  important reason for doing so).

Some of us are trying dairy substitutes these days, too. Items once relegated to specialty and health-food stores — such as cashew milk, soy cheese, and coconut yogurt — have earned a more prominent, and likely permanent, place on mainstream supermarket shelves in response to consumers’ growing interest in plant-based products. According to a report published earlier this year, the dairy-substitutes market is expected to jump from $17.3 billion in 2018 to a whopping $29.6 billion by 2023. But is dumping dairy a good idea?

“I don’t recommend cutting out dairy completely,” says Edward Ruiz, registered dietitian and clinical nutrition manager at Desert Regional Medical Center. “If someone’s just kind of curious overall about a healthy diet, I recommend cutting back rather than completely eliminating it. It’s about controlling how much you have.”

Ruiz, along with current U.S. dietary guidelines, recommends three servings (the equivalent of three cups) of dairy a day. But as with all food groups, some dairy substitutes are better than others. “Yogurt is processed differently than milk, and typically it’s healthier and contains probiotics and can help stimulate good bacteria growth in your stomach. Milk won’t do that,” Ruiz says, adding that his top pick is Greek yogurt. “It’s one of the best protein sources when it comes to dairy and ranks among the healthiest dairy options.”

Because Greek yogurt goes through a more intense straining process, the whey and a good amount of the lactose are removed, resulting in a more concentrated product with more protein and less sugar than regular yogurt. It’s basically a nutritional powerhouse, but only if you stick with plain since flavored versions typically include lots of added sugar. (Opt to doctor it up with fresh fruit and chopped nuts yourself.)

According to Ruiz, those looking to lose weight or who are concerned about heart disease can replace higher-fat dairy products like whole milk with lower-fat options, which still have the same amount of calcium and nutrients. “Whole milk is higher in calories, and the extra fat in whole milk is saturated fat. That’s the fat associated with bad cholesterol.”

And when it comes to butter, that most vilified of dairy products thanks to its high saturated-fat content, don’t worry: A pat here or there isn’t going to kill you. “I don’t like telling people, ‘Don’t ever eat this.’ As long
as it’s moderated and you’re not adding a stick of butter to everything, a little is fine,” Ruiz explains. “But olive oil is going to be a better alternative.”

The health buzzword “inflammation” — the body’s response to injury or infection — seems to be everywhere lately, and you may very well have heard it linked to dairy consumption. While acute inflammation is the kind that’s easy to see (a cut on your hand might become red and inflamed before it heals), chronic inflammation can have less noticeable symptoms and occurs when the body’s immune system is triggered by a variety of issues and doesn’t subside, increasing risk of cancer and other diseases.

Consuming high amounts of alcohol, sugar, trans fats, and processed foods can contribute to long-term, low-grade inflammation, but it can also stem from food sensitivities and allergies. So, yes, you could experience inflammation if you consume dairy regularly and have a dairy allergy, but that’s pretty rare, according to Ruiz, and completely different from having a lactose intolerance, which doesn’t impact the immune system but instead causes symptoms like bloating and diarrhea.

For everyone else, some studies show that dairy can actually help prevent disease. One, released in 2016 in the journal Food & Nutrition Research, found that dairy consumption was associated with a neutral or reduced risk of Type 2 diabetes and a reduced risk of cardiovascular disease, particularly stroke, and was inversely associated with multiple cancers, including colorectal and breast.

If you still want to reduce your dairy intake or cut it out completely, whether it’s for ethical reasons, an attempt at a new diet, or you simply want to find out what eating like Gwyneth Paltrow is like for a few weeks (here’s hoping we get her skin!), Ruiz says, go for it … but pay a visit to the doctor first to ensure you’re not deficient in something and thus going down a potentially harmful path.

“I never say never when it comes to trying a new eating plan, but if you’re going to, you have to be aware of what you’re taking out because you have to, in some form, supplement it. There’s nothing wrong with soy milk, almond milk, or rice milk, but they don’t have the same vitamins, minerals, and even protein as milk derived from dairy.”

For calcium, look to vegetables including leafy greens like spinach and kale along with broccoli, sweet potatoes, and butternut squash. And ramp up your protein with beans, nuts, quinoa, and (if you’re not cutting out animal products completely) eggs, chicken, and fish. While you could pop a supplement, try to get what you need on the plate. “My field encourages that you get it more from your food, if you can,” Ruiz adds. “It’s overall a better way.”