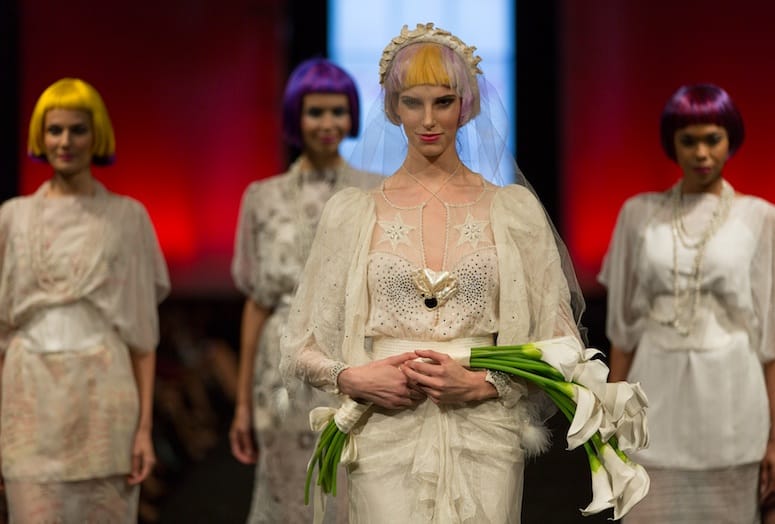 People who didn’t score tickets to the standing-room-only Zandra Rhodes show last night might long remember it anyway: as the one that got away. Friday night’s fashion show was, simply put, unforgettable, from clutching start to performance-art finish.

One for the Fashion Week El Paseo archives, Rhodes’ show certainly will become one to recount for anyone who will listen. Every aspect — emotive music, empowered models, meticulously orchestrated pace, and, of course, designs by one woman who has inspired countless others — had been carefully crafted under the watchful eye of a seasoned fashion veteran who has never compromised her personal vision. Surely it was kismet that on Fashion Week night No. 6 the gloss-white runway suddenly winked under the lights in twinkling black artificial turf. Thank you, desert rain. Safer for the models yet edgier, the new soft asphalt avenue was absolutely apropos. Often dubbed “The Princess of Punk,” Rhodes and her pink bob have long marched to the beat of a different drummer.

A black runway befits this style authority who has been a teacher, mentor, pioneer, rebel, and designer to the stars. Commended  by the queen, Rhodes has dressed Princess Di, Jackie O , and Sarah Jessica P. She is a legend who lives up to the hype, a role she has tailored since playing her part in launching the London fashion scene to international fame in the 1970s. Thanks to Rhodes’ penchant for the unconventional, on the penultimate night of Fashion Week, she pulled off an original and embracing experience on par with a finale.

In an interview before arriving in the desert, the British-born dame (a feminine noble title equivalent to “sir” for knights), Rhodes promised “young, feminine, super relaxed resort wear that can go from afternoon to evening,” paired with “one-of-a-kind visors.” She hinted at casual ease via “silk trousers and fabrics with gorgeous pink banana leaf on white” in addition to a “bright orange iridescent landscape with wiggly lines and fantastic cobalt blue with lines stitched in white.” These pieces from her new line hand-painted in London then handcrafted in Malaysia only scratched the surface.

Although not a retrospective exactly, the show ravaged the historical racks to unearth the designer’s early relics. Think: a rock concert that tears into platinum hits yet mixes them with songs off the new album and a random, magical work in progress. Yet here, the eras were imperceptible. Mere months ago, she was showing at London Fashion Week. Last night, pieces from her touring museum exhibit “Zandra Rhodes: A Lifelong Love Affair with Textiles” from the city’s Fashion and Textile Museum had made their way to Palm Desert.

To remind folks born in the last 40 years that Rhodes designed her own collection in 1969 and has been rocking the catwalk ever since doesn’t do a crumpet of justice to the range of her show. Set to a soundtrack that mingled Donna Summer’s “Bad Girls” and “Whatever Lola Wants” with angelic opera and orchestral classical, this prolific and theatrical (though never contrived) event told its fashion tale in chapters. We suspected it all along: This 70-something ingénue has the creativity of a 20-something art school teacher’s pet, but with polish and whimsy. The show’s buoyant pace didn’t rush a single moment. Its energy and swagger delivered an experience well beyond watching clothes move.

Slick, plastered-hair ponytails? Please. Leave it to a dame to create a parade in her trademark image that comes off as anything but egotistical. Shiny bobs in solid, streaked, two-tone, and color-tipped styles stepped out in a show-long sisterhood of the traveling wigs. The chic haircut tied each chapter together with solidarity. And prompted the impulse to bob one’s hair and dye it ice blue. Rhodes’ cute (No!) models even interacted (No!) with the audience. They danced, blew kisses, waved at each other or slapped hands as they walked by. Hip swaying, shoulder shrugging, and flirtatious as cheerleaders, they adjusted their sunglasses, shimmied, and held their skits, jackets, dresses, and cloaks in hand amid groovy twirls.

For a designer who loves to play dress up, Rhodes dressed it down with “ZR” stitched on denim jackets and the bum cheeks of jean shorts. Platform sneakers and visors balanced heels and gladiator boots. Igniting a fire among attendees, a passionate red-and-black dragon collection fit its anthem: “I Will Survive.” Pants toyed with color placement: one leg in red, one in black; half a leg red, half in black; red on front, black on the back. Rhodes’ lifetime of travels transpired through batik-ish prints, obi belts, modern kimonos, harem pants, ornately patterned caftans, and bandeau tops topped with a jeweled centerpiece. Daisy Buchanan herself would have lusted after a fringed flapper dress, worn by a coquette who stopped to pose more than once with her fingertips touching under her chin. When a bride and three bridesmaids emerged, few could contain themselves. With the wedding party frozen at the end of the runway to plodding music, anticipation mounted. What next, Zandra? Models burst forth from backstage, showering the runway with a sea of red rose petals. On the arms of two, the diminutive Rhodes brought the house to their feet as they clapped to the music. Take that, Coachella.

Do you remember Johnny Depp as Willy Wonka, looking at the unassuming Charlie Bucket, saying, “And you. Well, you’re just lucky to be here, aren’t you?” It’s always an honor to know you’re in the presence of someone who has been around the block — and awed just about everyone on it. “I didn’t want to it to end,” lamented one guest to her daughter.

None of us did, my dear. Embrace the pang. You’ve witnessed a rare night with Rhodes, on her unbroken timeline of enduring success.