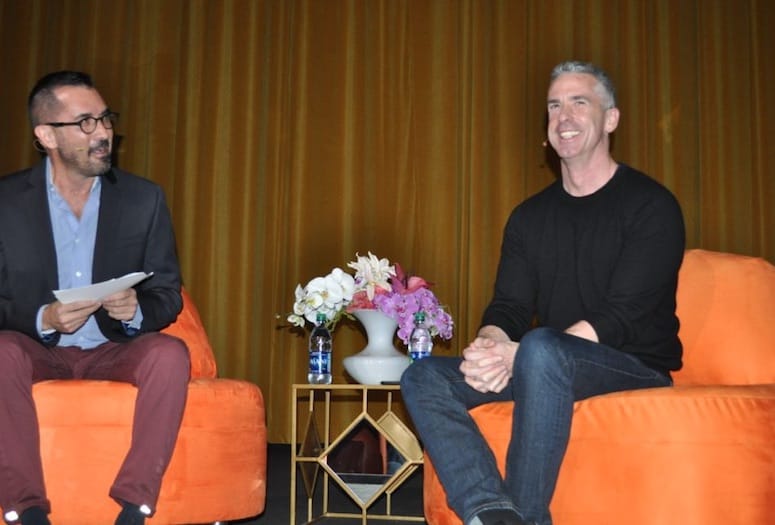 Dan Savage understands the importance of making noise to encourage change. “There was a girl in Mississippi, Constance McMillen, who wanted to bring her girlfriend to prom,” he told the crowd at the first-ever Palm Springs Speaks event Nov. 14.

“So, her high school canceled the prom. Because it’s not hard enough to be a lesbian teenager in Mississippi; you have to paint a bulls-eye on her back by pointing at her and saying, ‘She’s the reason there’s no prom.’ When the ACLU sued, the school said [of having a lesbian couple attend], ‘It would be a distraction.’ So, I said to my readers and listeners, ‘Let’s make sure that discriminating against these kids is a much bigger distraction for this school than allowing this kid to be who she is. And they did that. We went there to the school ... and my readers painted a bulls-eye on the assholes who painted a bulls-eye on that vulnerable girl.”

The first speaker in this new series, Savage is an author, media pundit, journalist, and activist for the LGBT community who writes Savage Love, an internationally syndicated relationship and sex advice column. Palm Springs Speaks, which seeks to entertain and educate while promoting the importance of the written word, plans to bring together variety of speakers from various walks of life while benefitting the Palm Springs Cultural Center and Friends of the Palm Springs Library. Tickets for upcoming speakers — including Dr. Deepak Chopra Feb. 3 — can be purchased online at palmspringsspeaks.org.

In 2010, Savage and his husband, Terry Miller, began the It Gets Better Project to help prevent suicide among LGBT youth. The project exploded with more than 200 videos uploaded in the first week and grew to include support from such unexpected sources as President Barack Obama and a number of professional athletic teams, including the Chicago Cubs and the Boston Red Sox.

The outspoken, seemingly fearless Savage, who has publicly clashed with social conservatives — and, on occasion, the LGBT establishment — kept the audience at the Camelot Theatres intrigued, informed, and amused for 90 minutes as he discussed what he believes should be our current No. 1 focus (getting the Trump administration out of office), how we all need to band together to save the planet (“Whether we’re gay or straight or religious or not religious, regardless of your gender identity, we’re all stuck on this planet and it’s coming apart.”) and — in the case of Constance McMillen — how his readers and listeners are affecting change.

Savage also shared his thoughts on President Trump. “He is a calamity, he is a disaster,” Savage said. “As I watched the [election] returns come in, I tweeted out that I’m watching my country commit bigotry-assisted suicide. I despair every day, I wake up as so many of us do now and pull up my phone just to see how bad it got in the six hours since the president woke up on the east coast.”

And for the differences between straight people and gay people? “Straight people do all the things gay people do,” Savage said, “they’ve just renamed it. We have tricks, they hook up. We have f---k buddies, they have friends with benefits.”