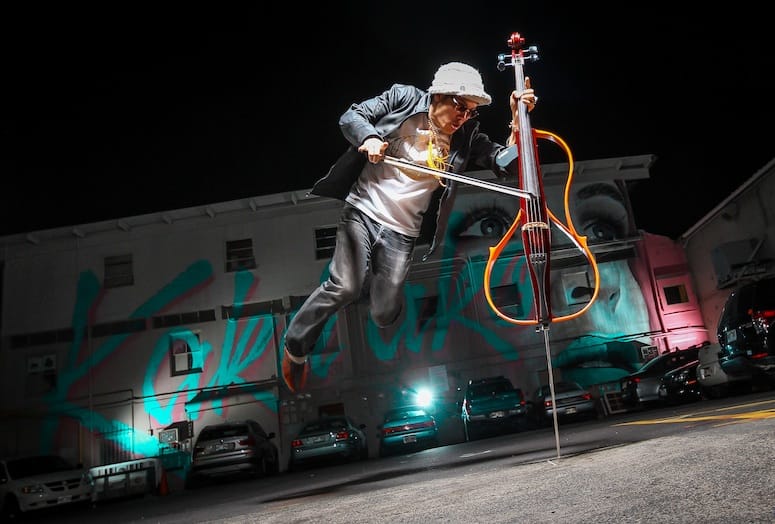 It might seem strange to see a famous trombonist playing in the air while scaling a building.

But that’s part of the premise of a special project called Bandaloop from Dana Leong and his team of aerial dancers, who take rock climbing to a whole different level by using buildings to become dance floors.

Leong and his band provide the music as the dancers move across the sides of buildings. They have performed on Yosemite’s El Capitan, a rock face in the Italian Dolomites and the wall of the Ed Sullivan Theater in New York for a 2005 appearance on Late Show With David Letterman.

“It’s a great challenge to be physically in shape and overcome a fear of heights, but I see the world in different perspectives,” Leong says.

Leong’s creative and artistic perspective has propelled him to the forefront of progressive music with a sound that fuses electronic hip-hop, funk rhythms, and rock propulsions with classical cello and trombone instruments. Often using his laptop onstage, Leong pushes the envelope with modern sounds.

“Music is a universal communication,” he says. “Any music has a message because it carries energy and meaning.” Leong and his band will perform June 20 in the McCallum Theatre Institute’s Summer Session Festival, which runs June 16-20. The week starts with Incandescent performed by Backhausdance on June 16 followed by Walking the Tightrope by 24th Street Theatre on June 18.

Palm Springs Life spoke with Leong about his contemporary influences, inspirations, and aspirations.

Your compositions have been acknowledged as progressive. How would you, personally, characterize your music?
“My music is an exciting fun blend of all the different music that I’ve enjoyed throughout my life. Elements of electronic grooves, beats, jazz and pop.”

How do think your music has changed the face of contemporary music?
“Well, I like to think that I’m trying to lead an example that there are no limits or boundaries to what you can do in music. The more you explore your interests and passion, the more you discover about yourself. And discover there is nobody else like you!”

You play the cello, the trombone, and the piano…do you have a favorite instrument?
“I still like piano even though I don’t spend a lot of time on piano. The keyboards have electronics now. I still love to sit at the piano and play. It’s one on my favorite things to do.”

What do you hope your audience at the McCallum will take away from the experience?
“You know, I just hope that I’ll live up to what they are studying. A big portion of the audience will be students. It’s a unique program. In many music appreciation courses you study artists that have passed on, but (The McCallum) encourages teachers to teach about living artists and the artists that are coming to the concert hall. I’m excited to be a part of it and hope for a positive to last a lifetime.”

Your bio says you’ve acted a bit?
“I’ve actually been in a number of films and runway shows. All have been very musically related. I played the principal cellist in August Rush, and I gave Kerry Russell tips on playing the cello.”

What is an acting role you would like to take in the future?
“As silly as it is, I would like to be in a comedy movie with any of the great comedians of our day. I think Kevin Hart, Adam Sandler, and Chris Rock would be fun to work with. They seem like intelligent, super funny, hard workers.”

What other future aspirations to you have?
“Well to continue to learn as much as I can. I just hope to continue to have the best day ever… every day.”