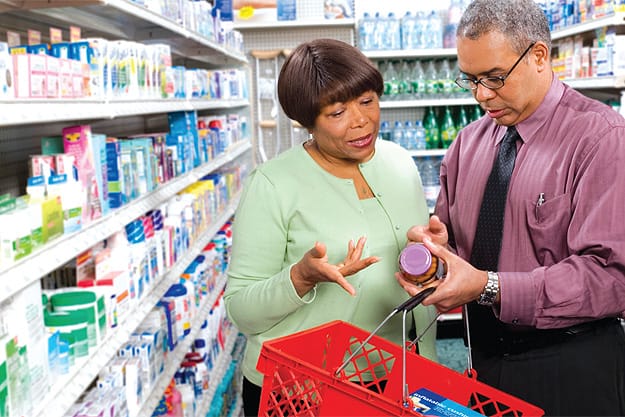 Listen to the lengthy warnings at the end of any commercial for a drug and you’ll wonder why anyone would chance serious — and even fatal — side effects to break a smoking habit, get a good night’s sleep, lower cholesterol, ward off the possibility of osteoporosis, or alleviate heartburn or other ailments. The makers of Zoloft even warn of increased suicidal thoughts among young patients taking the antidepressant.

Yet anecdotal and statistical evidence points to a growing number of people walking into their doctors’ offices requesting medications they’ve seen advertised.

“There’s not a day that goes by that doesn’t happen,” says Dr. Andrew Alexander of his own experience. An assistant clinical professor of family medicine at University of California, Riverside and a family practice physician with offices in Palm Springs and Riverside, Alexander cautions people to be suspicious of TV ads.

“In 30 seconds, they can convince someone (1) that they have a condition and (2) that the treatment for that condition is in front of them,” Alexander says. “It takes me more than 30 seconds to undo what the drug companies do on TV. As physicians, we have to link the diagnosis and treatment.”

Unfortunately, numerous studies show that most doctors will prescribe a requested drug. Alexander points to a 2011 study at Marshall University in Charleston, W.Va., that found 14 percent of patients who were refused a drug they had requested based on an ad switched doctors.

“The problem with TV drug ads is they don’t give the instances of adverse reactions,” says Robert Steven Gold, a 30-year hospital pharmacist, instructor of clinical pharmacy at Purdue University, and author of Are Your Meds Making You Sick? (Hunter House, 2011). Gold thinks TV ads should state the number of people who are expected to have a specific adverse reaction — for example, two of out 100 people may experience [X].

“[Consumers] can’t get their heads as easily around 10 or 20 things of equal weight, so they just say, ‘Whatever,’” Gold says. “They go to their doctor and say, ‘I want to try such and such,’ and they don’t have any real sense of what could happen. The literacy of pharmacy is very low in the general public. People really have to start taking some responsibility to understand the medicines that they’re taking.”

Alexander agrees that information is important, but stresses that patients should learn about possible diagnoses “rather than jump straight to the treatment.” When his patients ask for a drug, he views it as an opportunity to educate them. “The first thing I tell patients is we need a diagnosis,” he says.

“The only one that can say you need a medicine is the physician,” says Dr. Tahany Habashy, assistant clinical professor of family medicine at University of California, Riverside School of Medicine and family medicine practitioner in Palm Springs. “You need to ask your physician, ‘Do you think this medicine would be OK for my status or condition?’”

According to the Centers for Disease Control and Prevention, by 2007-2008, a half of all Americans and nine out of 10 adults aged 60 and older used at least one prescription drug and one out of 10 used five or more. The report, released in 2010, states that the use of multiple prescription drugs had increased by 20 percent in the past decade and the use of five or more drugs increased by 70 percent.

Include over-the-counter drugs when researching potential interactions. Many contain lower doses of prescription formulations and come with the same usage concerns. Read the labels, especially the warnings, directions, and “other information.”

“[E]ven completely natural formulations should be considered drugs,” Gold writes in his book. “For example, ginseng and ginko biloba can increase the metabolism of warfarin and thus increase the risk of bleeding. Alcohol, too, is a drug; therefore, you must seriously consider how it can interact with other medications in ways that are detrimental to your health.”

Habashy says patients need to let their doctors and their pharmacist know what other medications (including over-the-counter drugs and supplements) they are taking and recommends using only one pharmacist so he or she has a record of other prescriptions to be checked for interactions.

The Food and Drug Administration has a medicine record form that can be downloaded at www.fda.gov/Drugs/ ResourcesForYou/ucm079489.htm.

The FDA maintains an Adverse Event Reporting System that gathers data from voluntary reporting of adverse reactions by healthcare providers and consumers. If a drug manufacturer receives an adverse event report, it is required to send the report to the FDA. In 2000, the number of adverse events reported to the FDA was 266,866; in 2010, the number climbed to 758,890. Among those reports, reactions with serious outcomes (including hospitalization, disability, life-threatening conditions, and death) totaled 153,818 in 2000 (19,445 deaths) in 2000 and 471,291 (82,724 deaths) in 2010.

Dr. Joel Stillings, an emergency room doctor at Desert Regional Medical Center in Palm Springs, says adverse drug reactions are a common issue in the ER, especially among older patients who take more medications. He points to a study reported in the Journal of the American Medical Association in 2007 that estimated the number of visits to U.S. hospitals for adverse drug reactions to be 700,000.

For the most part, people who arrive in Desert Regional’s emergency room for a drug reaction are monitored four to six hours. “Then if there’s an issue or a problem, they would be admitted to the hospital — generally for 24 to 48 hours to allow the medications to metabolize out of their system,” Stillings says, adding that specific medications may require a longer hospital stay. A variety of antidotes may be administered based on the specific drug(s) taken.

People should be aware that adverse drug reactions are not exclusively related to new prescriptions. If they have a problem with their kidneys or liver, for example, it could suddenly affect they way they metabolize a medication they have been taking for years, Stillings says.

When a person seeks medical help for an adverse drug reaction, they should bring with them all of their medications and dosages, “not just the one they feel is the offender,” Stillings says.

Alexander, Habashy, and Stillings stress this: If you develop any swelling of the throat or tongue and/or have trouble breathing, call 911.

A May 2011 brief by the Congressional Budget Office weighed the potential effects of a two-year moratorium on direct-to-consumer advertising of newly approved prescription drugs, a proposal spurred by “concerns about large numbers of patients taking drugs whose safety and possible side effects might not be fully understood.” Several bills have been considered, but not adopted, by Congress in recent years.

According to the brief, between 2004 and 2008, doctors prescribed 14 times as many advertised drugs as those not advertised. However, it notes, “The decision to purchase a prescription drug is not entirely the individual’s; rather, it depends also on his or her physician’s decisions about what to prescribe and, in many cases, his or her health insurer’s choices about what to cover.”

The CBO concludes that, because studies show direct-to-consumer advertising spurs individuals to seek treatment when they otherwise might not, “for drugs whose health benefits outweigh their safety and other concerns, a moratorium might reduce their use by a portion of the population who would benefit from the drugs.” Additionally, it states that a moratorium on consumer advertising might postpone “the realization of a drug’s true risks” merely because fewer people would be taking it.

Before taking a drug, ask your doctor and/or pharmacist the following questions:

• Can I take it with other drugs?
• Should I avoid certain foods, beverages, or other products?
• How will the drug work in my body?
• What are the possible drug interaction signs I should know about?
Source: Food and Drug Administration

www.drugdigest.org — to check interactions between drugs, as well as with food and alcohol