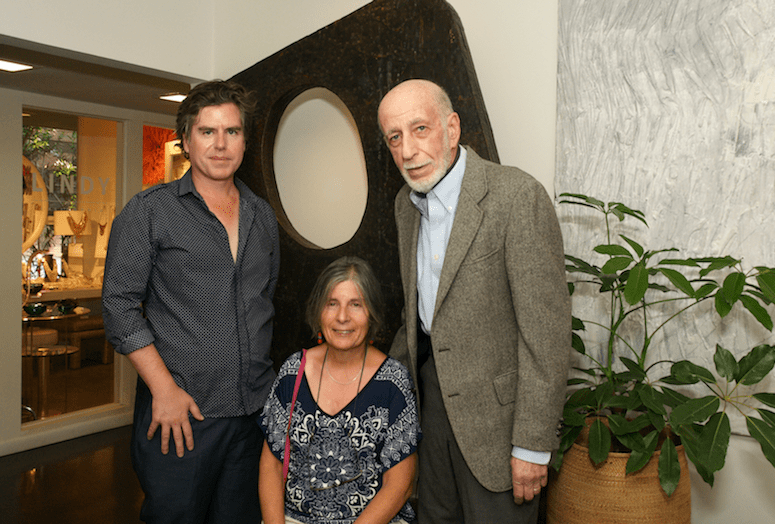 He incorporated Anson's sculpture into a pop-up shop for an event April 18 at The Shops at Thirteen Forty Five, which held a silent auction of art and accessories with the proceeds benefiting the Palm Springs Animal Shelter. The 11 shops in the complex, located at 1345 N. Palm Canyon in the Uptown Design District, are chock full of vintage and modern furniture, home accessories, clothing, jewelry, and art.

“I’ve been putting his work in a lot of my projects and I was just very inspired by him,” says Brown. “He’s a local artist/craftsman who does ceramics and metal sculptures, and I thought it would be fun to do something together.” Candice Held, who was recently part of Fashion Week El Paseo 2015 in Palm Desert, has a boutique at The Shops at Thirteen Forty Five.

The pop-up shop will be on display for the next 30 days.

“[The pop-up] is sort of a rustic/modern thing. A little bit ethnic, Asian, sort of celebrating handcrafted,” he adds. Indeed, there’s a diverse array of items curated from Brown’s personal collection including an African stool in the form of a bird and a mirror with a papier-mâché frame that Brown made himself last week. Brown has been working in the desert since 2005 and moved here from New York City in 2013. He was the director at Jonathan Adler’s interior design studio and did the renovation of the Parker Palm Springs hotel. He’s also worked on the Frank Sinatra Twin Palms house, the William Cody-designed Abernathy house in the Movie Colony and, more recently, the redesign of Gerald and Betty Ford’s former home in Rancho Mirage. The latter was recently featured in a cover story for the T, The New York Times Style Magazine.

“We worked on it for three years,” Brown says of the Ford project. “At first they [the homeowners] thought they were just going to go in and paint, and then it became a major undertaking and we reinvented the house. I’ve worked with those clients before and they’re fantastic. They let me do what I want to do and they’re just fun, and they want everything to be over the top and crazy.” “We removed the drapes from the living room and we took them all apart, had them cleaned, and then we made a whole room out of them,” says Brown.

The drapes were repurposed for a guest bedroom where they were again used as drapery, but also for the bedspread and headboard.

“There were water stains on the drapes so we got a local person to embroider over the water stains so it looks like vines. [The clients] love the history about it and were sort of repurposing all of these things but in a fresh, modern way,” he says. In the meantime, Brown has been collaborating with the current owners of the home Donald Wexler built for himself and his family in the Movie Colony. “We’ve been working on it for about a year and half and now we’re doing the decoration,” he says.

And Brown seems to find working in the desert particularly inspiring.

“You couldn’t do what I did at Betty Ford in [a] New York [apartment]," he says. "Everyone wants Neoclassical, and ‘the look.’ And out here, what I love is that there’s so much wealth of different architectural styles and periods—1920s Spanish, Midcentury Modern, disco, the 80s. And I get totally inspired by all the shops in town, the wealth of merchandise, and things I’ve never seen before.”