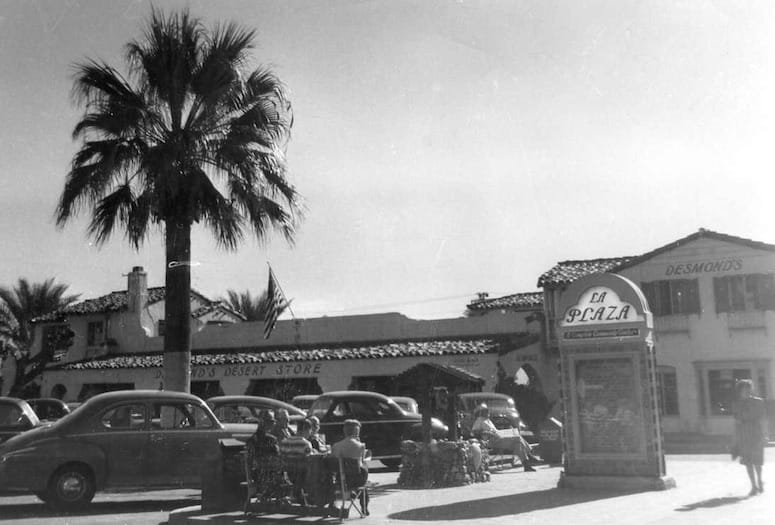 In December 1945, the Palm Palm Springs Chamber of Commerce proposed a daylight savings plan that would give the downtown business district an extra hour of sunshine.
PHOTOGRAPH COURTESY OF PALM SPRINGS HISTORICAL SOCIETY

Beginning on the first Sunday in November, daylight savings time comes to an end and residents and visitors begin to complain about how early the sun descends behind Mt. San Jacinto, dramatically dropping the temperatures.

Shoppers come downtown wearing shorts and other summer-like clothing, only to scurry inside for warmth as the sun drops behind the mountain in the Palm Springs downtown business district. Would-be shoppers disappear, leaving store owners to complain that they lost at least an hour a day of foot traffic due to the lack of sunshine.

On Dec. 21, 1945, the Palm Springs Chamber of Commerce took up the plight of merchants and proposed a daylight savings time plan that would give the downtown business district an extra hour of sunshine. The proposal was read to the city council by the executive secretary of the chamber of commerce, noting that a majority of the businesses owners were in favor of setting Palm Springs’ clocks ahead one hour and giving the plan a try.

City Attorney Roy W. Colgate declared that any change in Palm Springs’ time zone would need to be put to a public vote. Councilman Culver Nichols, who was in favor of the proposal, declared that it was within the council’s power to decide on the proposal and the mayor could enact it by proclamation.

The decision was shelved until a more thorough study could be done. After almost a year of discussion and debate, on Nov. 8, 1945 the city council voted 6 to 1 to authorize Mayor Clarence Hyde to proclaim that daylight savings time or “sun-time” would begin on Nov. 17 for a 120 day trial run.

There is a multitude of ways to Explore Palm Springs, which turns 80 in 2018. One of the more intriguing methods is by exploring Palm Springs history. The Palm Springs Historical Society will share a story whose time and place corresponds with today.