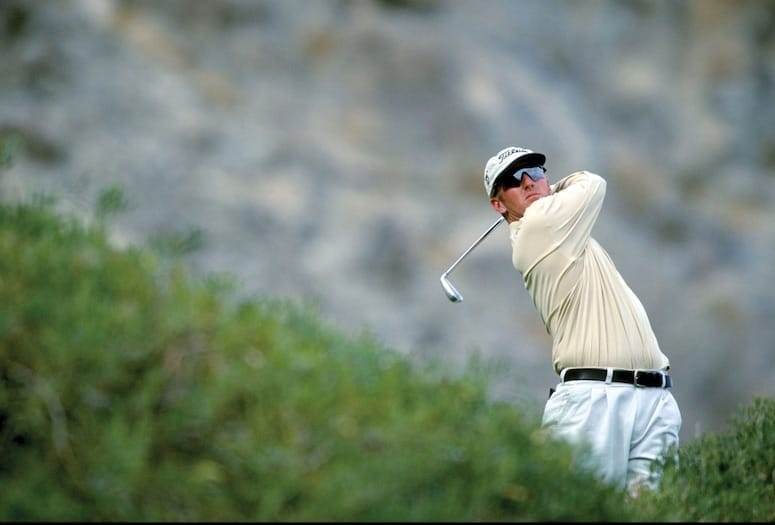 The words “perfection” and “golf” should not be used in the same sentence. They are apples and oranges, fire and ice, diametrically opposed concepts. Perfection demands no ruffles, no blemishes, no downside. Golf demands them all.

On Jan. 24, 1999, on the Arnold Palmer Private Course at PGA West in La Quinta, on the last day of the Bob Hope Chrysler Classic tournament, David Duval put 14 tools in his golf bag and dared to mess with perfection. He shot 59 and won the event. He started the day seven shots behind, in 13th place, and finished it with an eagle-three on the final hole. His round was 13-under par, or 26-under par for the five-round event. That 59 meant he would win the tournament by a single shot because the player who had started the day seven shots ahead of him, Steve Pate, shot 66. That 66 in the final round of a tournament by the player in the lead was incredible. Duval’s 59 was otherworldly. 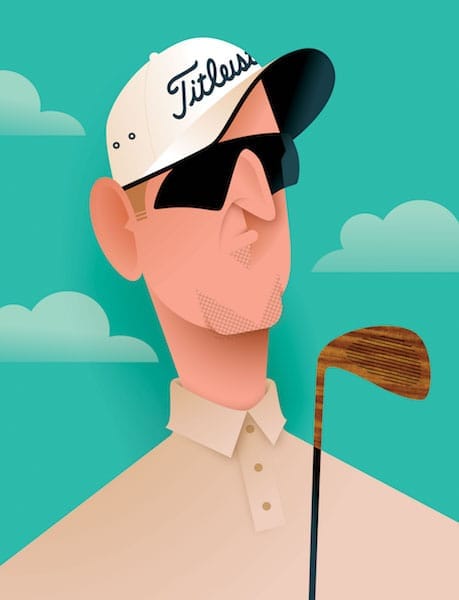 Based off the reception to the tournament, a combination of events like these has rarely, if ever, occurred in golfing history. Afterward, Pate was either numb, or resigned. Maybe both.

“I played better than everybody but one guy,” he said in a post-match interview. “I guess you could say I was in the wrong place at the wrong time.”

A reporter tried to be consoling, telling him his second-place check would be $300,000.

“Biggest check I ever got,” he said.

Duval’s check was $450,000. It was his ninth win in 25 tournaments and his bank account had swelled by $4.9 million in the previous 15 months. But history seemed to mean more to the man who would, in short order, replace Tiger Woods at No. 1 in the world; a man who, worth a chuckle in that moment, once had a dog named Bogey.

“I’m not sure I should have said it, but I feel the same today,” he says. “Getting the 59 was more important to me than winning the tournament. You may never get a chance again. And if you get as close as I did and then miss the last putt, you are looked at as kind of a goat.”

If it happened today — Duval’s was only the third-ever sub-60 on the PGA Tour — the constant burst of social media fireballs would have burned this golf round, this moment, into the psyche of multi-millions. For sports fans, and news hounds, this would have been click heaven. Not so much in 1999.

Duval finished four groups in front of Pate, and then hung around to make sure he didn’t have to go back out for a playoff. When Pate came to the par-five 18th hole, he had to make a 20-foot birdie putt to get into a playoff. Duval watched, off to the side, munching on an apple. He wanted no part of a playoff. He had just left every emotion and focus on the golf course. He was in pursuit of one of the game’s holy grails, a sub-par 60, and a none-erasable legacy. Pate’s putt missed by inches.

To this day, Duval’s thoughts on having to participate in a playoff have not changed.

“Suddenly I was 11 under par with two holes to go.”

Lucky for golf that didn’t happen: A playoff, especially a loss by Duval, would have blemished what arguably came as close as anything in the sport to perfection. There has been little question that Duval’s 59 was the greatest round of golf ever played in the desert. An argument, a never-ending one, says it was the greatest round ever. Anywhere.

There have been 11 male players who have shot below 60 on the tour. Jim Furyk has done it twice, including a 58. Annika Sorenstam shot her 59 in 2001 on the LPGA tour and remains the only woman to do so. The 11 men are Al Geiberger, Chip Beck, Paul Goydos, Sturt Appleby, Furyk, Justin Thomas, Adam Hadwin, Brandt Snedeker, Kevin Chappell, Scottie Scheffler, and Duval. 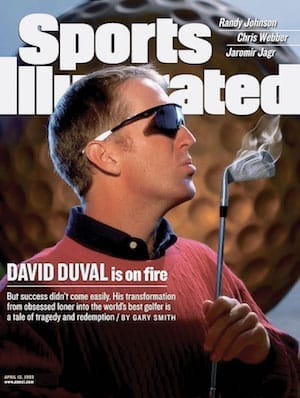 Geiberger was first in 1977, at a tournament in Memphis, Tennessee, and has proudly carried the nickname “Mr. 59” for years. Geiberger, Goydos, Appleby, Snedeker, Thomas, and Duval won the tournament in which they shot their 59. The others did not. Chappell couldn’t break 70 in his final two rounds and finished with a share of 47th. Geiberger has argued for years that his round, as well as those of Beck, Hadwin, and Duval, were the best of the best because they were shot on par-72 courses and were 13-under par. Others argue that the par-72 courses are easier to score on because they have more par-five holes for the pros to bridie.

“I tend to agree with Al Geiberger,” Duval says, not surprisingly.

Only Appleby and Duval posted their 59s in the final round of a tournament. Many argue that those are the best because of the added pressure to win. Appleby and Chappell shot their 59s on the Old White Course at Greenbrier, a course ranked nowhere near the toughest on tour. But then, the Arnold Palmer Private Course isn’t exactly Torrey Pines or Pinehurst.

Interestingly, the desert has been a nexus for the sub-60s. “Mr. 59” himself is a longtime resident of La Quinta. Hadwin’s 59 was on a Saturday at the 2017 desert’s CareerBuilder Classic. There have also been two 59s at the PGA Tour’s qualifying school in the desert: David Gossett in 2000 and Harrison Frazier in 2008. Plus Duval. 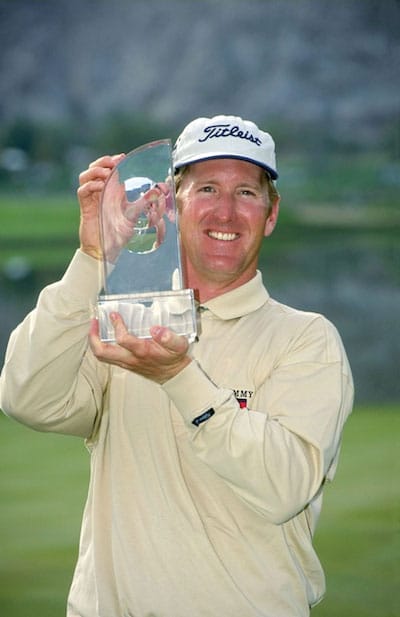 Duval’s 59 prompted some wonderful journalistic hyperbole. Tommy Bonk of the Los Angeles Times called it the “ultimate lowdown” and the “most of the least.” He also dubbed the round “an almost numbingly routine looking 59” and added that the only suitable thing to use for writing that 59 down on the scorecard was a gold pen. He added that this 59 was “golf’s equivalent to being struck by lightning. John Feinstein, writing in the Men’s Journal, called it “one of the most sublime rounds ever carded in the history of the game.”

Duval’s day in the desert was cool and overcast. He wore white pants, a light-yellow, long-sleeve Tommy Hilfiger shirt with the top button buttoned (as usual), and a white Titleist cap. One story likened him to a banana covered with vanilla ice cream. Even though it wasn’t one of those sun-glare days, he wore his signature Oakley wraparound dark glasses. Many writers, cynical by nature, speculated in those days that the glasses were a way for Duval to indicate he wished to be left alone, to hide in the dark behind the glasses. In fact, he needed them for a stigmatism.

He would birdie the first four of the five par threes on the course — he hit his first four shots to three feet, five feet, two feet, and two feet. After the last one, playing partner Jeff Maggert turned to Duval and said, “I didn’t know we were playing par-two’s today.”

The reality of a 59 really started to settle in, according to Duval, on No. 16.

No. 17, a par-three tucked against a hill where, in later years in the tournament, bighorn sheep would meander down the mountain during play and stand and graze between the tee and the green. There were no sheep that day, only big pressure for Duval. His nine-iron stopped 20 feet from the hole and he left himself five feet for par.

He did, and the rest is history. No. 18, was a par five, with water guarding a narrow green on the left. An eagle three was his only chance, and so he took it. He drove it 320 yards, hit a five-iron 218 yards that stopped six feet to the left, and rolled in the little right-to-left putt.

The player who writer Bonk described as “normally as emotional as granola” pumped his fist in triumph, then did it again. The banana-yellow shirt was hanging out in the back, but at that moment, nobody was deducting style points.

Duval had a place in history, one that should, soon, land him in the International Golf Hall of Fame. He had a 59. He achieved a golfing come-from-behind bordering on the impossible, and had done it on a day of magic that would make even Houdini proud. Duval would go on to replace Tiger Woods at No. 1, when Woods was at his best and nearly impossible to knock off the top. Duval would win the 2001 British Open (his only major championship) three strokes ahead of runner-up Niclas Fasth and then fade a bit from the scene, as injuries infringed on all the perfect angles and flow of one of the best swings in the game.

Duval remains quiet and introspective but as articulate and reasoned a golf broadcast commentator as there is. His work with the Golf Channel and ESPN has drawn praise for his ability to analyze and comment on the current game and its players. That quiet manner, often misunderstood as a player, has carried him well in a broadcast career where, often, the louder and less conventional you are, the more attention and better jobs you get.

"I was screaming for it to go in."

Feinstein’s summary in his Men’s Journal piece was: “As much as Duval relished being the best, he wasn’t born for the showmanship of being No. 1.”

There is very little “look at me” in David Duval.

When asked about the emotions and immediate aftermath of his day of 59, he told the story about a neighbor calling his father, Champions Tour golfer Richard Duval, during the round.

“He told my dad he better turn on the TV,” Duval says. “My dad asked why; I was seven shots behind to start the day. The guy told him, ‘Just turn it on.’”

Duval was questioned what he did after the round, after the interviews and trophy presentations, after the smoke had cleared and he had time to think about what he had done, maybe celebrate with a nice dinner.

“I just flew to Phoenix,” he said, “for the next tournament.”

Left behind was a golf course mastered like never before and likely never again and a gallery that had to pinch themselves knowing they were there to see it, and a legacy that — in golf and certainly in golf in the desert — might be the moment closest to perfection in a sport designed so there can be none.

• READ NEXT: Foodie Experts: Where to Dine, What to Order in Greater Palm Springs.