Orvieto, Italy, is the setting for David Eugene Perry's first novel after he and his husband, Alfredo Casuso, lived there for 3 months.
PHOTOGRAPH BY GETTY IMAGES

David Eugene Perry’s first novel, Upon This Rock, has been described by Tales of the City author Armistead Maupin as “an elegant twisty thriller about a couple who investigate a mysterious suicide.” Multiple Lambda Literary Award-winning author Fenton Johnson calls it “the gay Da Vinci Code but a lot better”.

The road to this mystery/thriller, set in a small, ancient Italian town called Orvieto, was unintentionally paved by Perry and husband Alfredo Casuso's friend, Tom Dross, a Palm Springs resident.

“When he passed away, he left us his house in San Francisco,” says Perry, who splits his time between Palm Springs and San Francisco. “We had no idea. A big ol’ honkin' house. The first thing I said was, ‘We’ve got to sell it.’”

Casuso had another idea. Perry’s longtime mentor and friend, the Rev. Anthony Turney, had terminal cancer. They should all move into the house together, so they could care for Turney. He gratefully accepted. Two other good friends, the Rev. Otis Charles, and his husband, Felipe Sanchez Paris, also helped care for the ailing Turney. They were family.

On July 31, 2013, the friends enjoyed dinner together the previous evening, but at 6 a.m. Perry's phone rang. It was Charles. Paris had died of a massive heart attack. Five months later, Charles was gone too, suffering from what is often called broken heart syndrome.

Turney succumbed shortly thereafter leaving Casuso and Perry emotionally depleted, and physically exhausted. In the midst of their grief, they received an offer for a three-month house swap with a couple in Orvieto, Italy. Perry and Casuso welcomed the change of scenery.

"I was off the grid for the only time in my life since I was a teenager," Perry says.

They took Turney's ashes with them (his wish was to be scattered in Glastonbury); it was to be the final leg of their journey. Those ashes ended up being the through-line in a story that unfolded the moment Perry set foot in Orvieto.

Founded in the 9th century BC, Orvieto not only sits upon a rock. Beneath it is an ancient, man-made maze of subterranean passageways. The town was home-away-from-home to ousted popes plotting their return to the papal seat in Rome, including Clement VII, displaced during the sack of Rome in 1527. 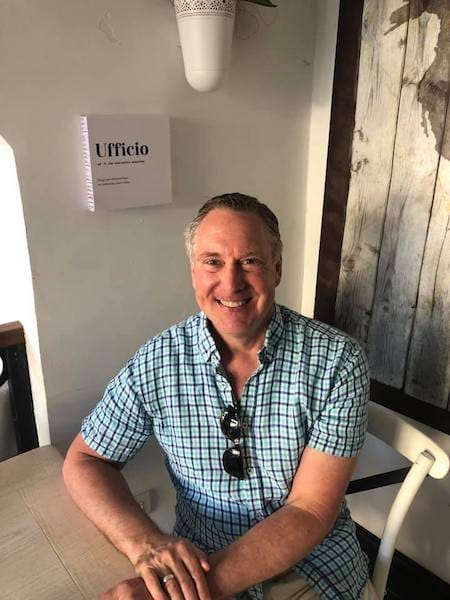 David Eugene Perry spent so much time writing his book at Capitano del Popolo that the owners put up a sign — Ufficio (David's office). This is the site of the fictional "Cafe Volsini" in the novel.

He became part of Perry’s story, and was, he says, his favorite character to write. It is through this character that Perry mines a long-pondered myth, maybe mystery (depending on who you ask), that beguiles art lovers, historians, and the Catholic Church to this day.

When we’re back in the now, Upon This Rock is giddy with assassins, terrorists, shady priests, human trafficking, and mega-watt conspiracies. Surrounded by wiley characters and never relinquishing its sense of humor, the story is wrapped in an astounding amount of history.

Not just Orvieto's, but long-forgotten Catholic history, rituals quietly retired by the new church only to be found lurking in the shadows of back-country towns.

"That was the most fun for me," Perry recalls, "the research. Anything in the book that has an actual date, whether it's World War II, or the Etruscans or the Medici, actually happened. For three months I wrote four to eight hours a day. I wrote chronologically and finished about 60 percent of [the book] in those first couple months."

Although it's Perry’s first published novel, it has the gloss of a more mature author. Perry is a seasoned writer. On the business end of the stick, he’s the founder and CEO of David Perry & Associates, Inc., a marketing/public relations firm specializing in Crisis Communications, Government Affairs & Business Development. In his younger years, he wrote his first novel, shelved it, and spent many a month on cruise ships writing their daily newspapers.

The leads, Lee and Adriano, are drawn from Perry and Casuso, but the identities of the supporting players he painted have the town, and Perry’s friends, guessing. He merely smiles and shrugs. While Perry eventually reveals it all in Upon This Rock, the identities of the shadier characters are one spot of tea Perry has no plans to spill.

Upon This Rock is available on amazon.com, or for more information visit his website, davidperry.com. 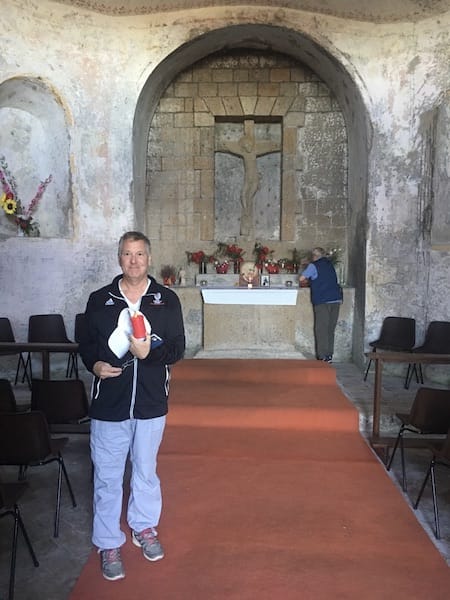 David Eugene Perry visits the Chiesa Crocifisso del Tufo Necropolis, the tiny church carved out of rock that commemorates the legend of Floriano, a Roman soldier who threw himself from the cliffs and lived.

• READ NEXT: Art Galleries in Greater Palm Springs Embrace the Virtual Aspect of the Pandemic.