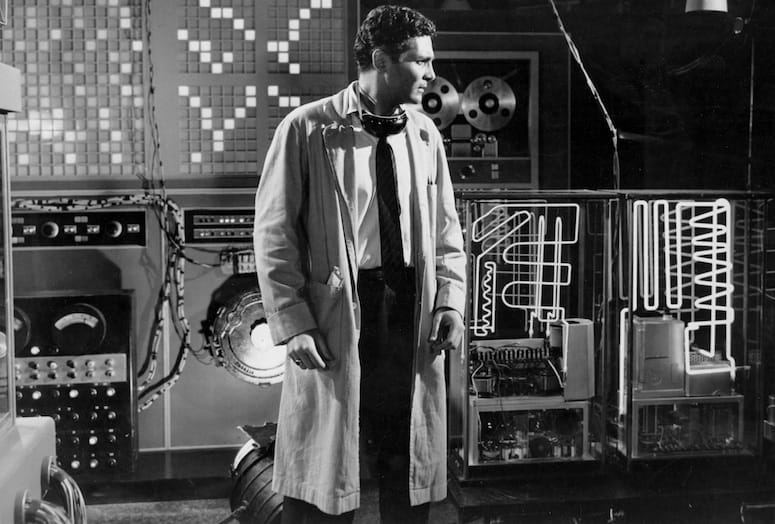 David Hedison says he loved the story of The Fly because “It was a love story. The scientist and his wife and the horrible things that happened to her.”
Photos courtesy of wrongsideoftheart.com

In 1958, a young contract studio actor for 20th Century Fox read a unique script that he fell in love with.

David Hedison says the film plot appealed to him because, “I believed it. It was a horror/sci-fi film. I read it and it had great potential and I believed it could actually happen. It was a love story. The scientist and his wife and the horrible things that happened to her.”

Hedison went on to star in the movie, The Fly with what he says was “a great experience with a great band of actors,” including Vincent Price, Patricia Owens, and Herbert Marshall. Herbert Marshall in a scene with Vincent Price.

For those unfamiliar, the plot involves Hedison in the role of a scientist experimenting with the concept of teleportation. After testing the machine on a cat that vanishes, he then tries to test it on himself. A fly enters the machine and tragically causes the scientist to morph into the monstrous creature.

While this original film version of “The Fly” went on to great success and is now considered a Sci/Fi cult classic spawning both a remake staring Jeff Goldblum in 1986 and a sequel in 1989, Hedison says that critics initially “lambasted” the film.

“I was in London making a film when it (The Fly) opened. The reviews were bad. They (the critics) thought it was disgusting and awful. Also, people love cats and dogs. And out of the blue (in the movie), I made the cat disappear. People didn’t like that the cat didn’t come back. So that was one bad point in The Fly.”

David Hedison as The Fly with Patricia Owens.

Bad points aside, Hedison’s career in film, television and theatre has spanned more than 50 years.

• He has played the iconic spy, Felix Leiter in two James Bond films: Live and Let Die and License to Kill.

• He starred as Captain Lee Crane in another vintage sci-fi television series, Voyage to the Bottom of the Sea.

Hedison will be on hand for a special screening of the original movie, The Fly at the inaugural Palm Springs Classic Science Fiction Festival, Oct. 23-25, at Camelot Theaters. Host Alan Rode, who also chairs the Film Noir Film Fest in the spring, will interview Hedison following the screening, which opens the fest at 7:30 p.m. Oct. 23.

“I love people, I love talking to them,” he says. “I hope they are happy with the film. It’s also great meeting young people who want to be actors.”