The history of celebrity home ownership in Palm Springs is well documented. But behind the familiar stories of "Frank Sinatra, Marilyn Monroe, or Elizabeth Taylor lived here" are houses that have had lesser known, but equally intriguing brushes with Old Hollywood.

Alice Mendelson, a New York socialite, built this home on Mariscal Road in the Little Tuscany neighborhood in 1954. In New York, Mendelson lived in the same building as her friends, singer/actor Dean Martin and his wife, Jeanne. She and the Martins also owned apartments in Paris near the Eiffel Tower and employed the same interior decorator to design their New York, Paris, and Palm Springs residences.

When they were in Palm Springs, the three often spent Sundays together—playing tennis at the Racquet Club and then heading over to Mariscal Road where Dean and Jeanne would host afternoon tea dances. As part of this tradition, Dean gifted Mendelson with a white Schafer & Sons grand piano that still sits in the living room today. While the home has changed hands twice since Mendelson sold it, the piano has remained a constant presence. 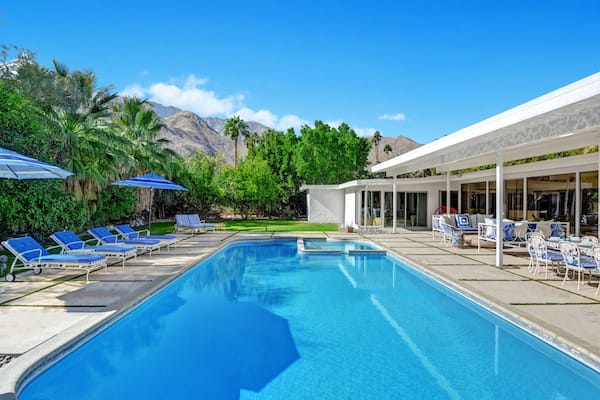 The over 2,300-square-foot, three-bedroom, three-bathroom house is now on the market for $1.8 million and the new owners will be able to tinkle the ivories once played by Martin since the piano will once again be part of the sale.

"The interior design is spacious, midcentury comfortable, and somewhat eclectic mixing old with new in a balance that gives you a feeling that you don't want to leave," says the current homeowner, who asked not to be identified. "All areas of the home are designed for entertaining from the lounge chairs around the pool to the covered outdoor dining areas that seat 12. (The patio and bedroom furniture, along with a number of items in the living areas are included in the sale.) 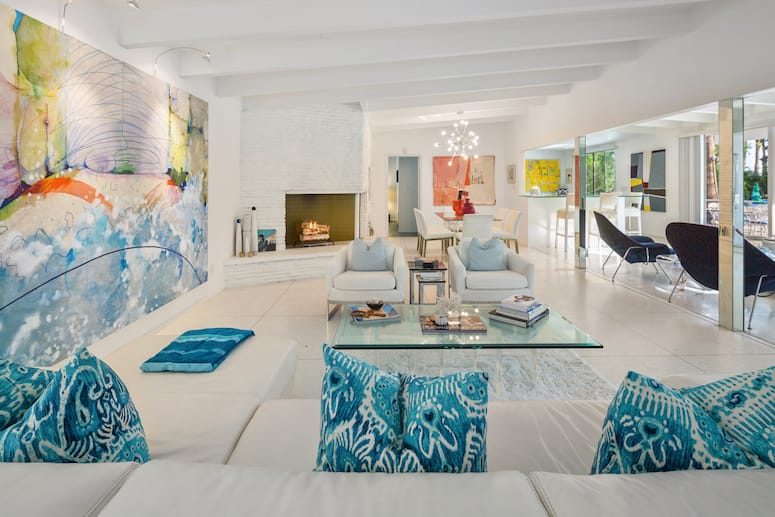 White terrazzo flooring flows throughout the living area and into the kitchen.

One of the more unique, original features of the property was an indoor gas grill that was built into the wall in the dining room. "There are two chimney's in the great room," says the homeowner. "One for the [wood-burning] fireplace and a second chimney for an internal gas grill directly next to the dining table. In the day, they'd sit at the dining table and grill steaks inside and take them off the grill right onto the dining table." (The grill and chimney are still in place but are now covered with mirrors.)

While maintaining the midcentury vibe of the home, the owners have updated parts of the property to make it more comfortable and in keeping with today's lifestyle. White terrazzo floors flow throughout the living and kitchen areas and match the original floors, while the bedrooms have polished concrete. 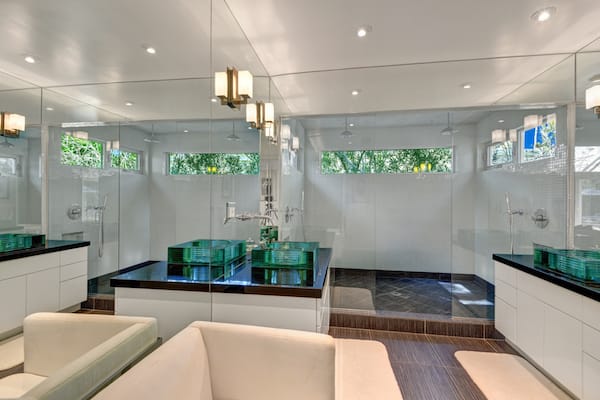 The master ensuite has two vanities with glass sinks and a large, 6-foot-by-10-foot walk-in shower with dual, rain shower heads and dual wands. 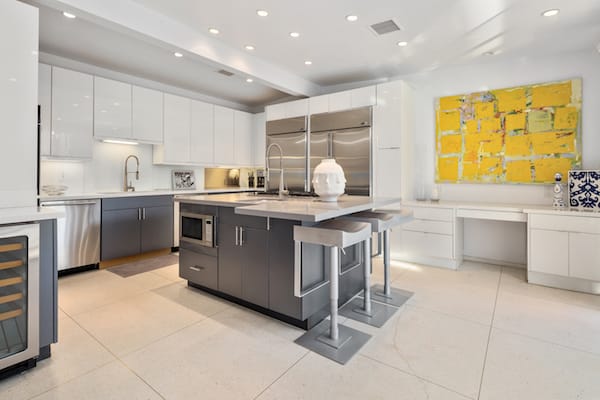 The master bedroom has a seating area that overlooks the pool, a walk-in closet, and an ensuite with a large walk-in shower.

The home sits on a private, almost-half-acre lot with thick vegetation around its perimeter and enjoys commanding views of the San Jacinto Mountains. 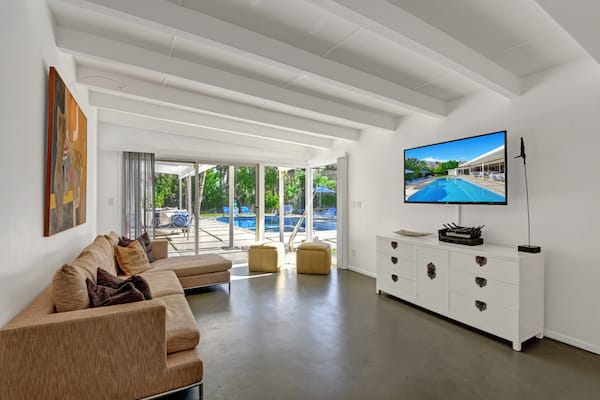 The master bedroom has a comfortable seating area overlooking the pool.