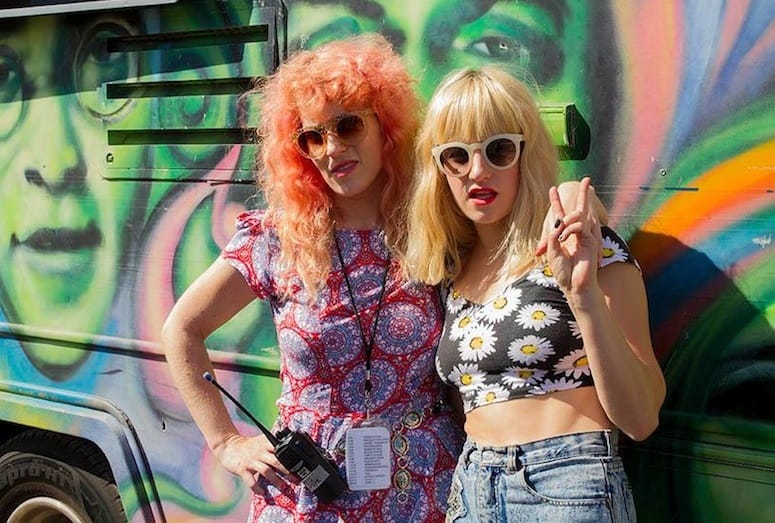 Julie Edwards (left) and Lindsey Troy formed Deap Vally in 2011, and currently working on their next album with Yeah Yeah Yeah’s Nick Zinner.
Photo courtesy of Deap Valley on Facebook

Two San Fernando Valley ladies walk into a needlework class. They expected to learn how to make a fabulous tapestry; never expecting to bond with one another over another shared artistic skill – music.

In 2011, Lindsey Troy and Julie Edwards began their band Deap Vally. Their humble beginnings at class seem to follow them wherever they go. An early gig at an LA Art installation called “The Womb Womb Room” had the ladies center stage in a psychedelic yarn-covered room.

Deap Vally performed its second gig with Marilyn Manson in the first row. He asked if he could be their No. 1 fan after the show. Axel Rose also enjoyed the ladies performance at a different gig. It was a sign of things to come. Deap Vally has opened for Muse and Queens of The Stone Age.

Having opened for Muse, Queens of The Stone Age, and other musical heroes, these ladies are on the fast track. Humbled by musical heroes considering them peers, it comes as a shock to see Courtney Love or Boy George has tweeted about them.

Troy took time out to talk to Palm Springs Life.

Have you played Ace in Palm Springs before?
"We haven’t. I feel like we have, but I’ve DJ’d out there before and Julie [Edwards} has booked other bands to play there, she and her husband organized a Halloween party out there. We’re excited to be playing with Fool’s Gold. We’re friends with a couple of those dudes, so it’s gonna be a fun night."

Have you recently had a crochet party?
"When we tour, we make these beanies that we sell. Exclusive, one of a kind, woven beanies. I love the idea of doing limited edition vinyl that includes something we knit or crochet. We taught crochet classes on a couple of our tours when we had a day off. Some of our fans from other countries came out to take the class." Lindsey Troy (right) did a DJ stint at Ace Hotel & Swim Club while Julie Edwards has booked other bands to play there, but this will be the first time they have played at the Palm Springs hotel.

Speaking of 2015, what does the coming year hold?
"We are working on our new record. It’s like halfway done right now. We are banging out more tunes. We’re going back in the studio next month to record some more stuff and hope it’ll be out next summer. We’re doing it with Nick Zinner of the Yeah Yeah Yeahs, he’s producing our record. He’s a great friend of ours they are one of my favorite bands of all time. I have a lot of respect for him. He’s like a sweet, mellow guy who’s funny and we just click really well with him. He’s just easy to work with, so it’s been really cool."

Do you know each other through the music scene?
"Yeah, we opened for the Yeah Yeah Yeahs a couple of times a couple of years ago and he was really into our band and we were at Coachella that year and this past summer he did this thing called 41 Strings at The Royal Music Hall in London which is this symphony he wrote and I performed on my birthday, June 20, in London. It was him, me, Romy (Madley) from XX, Gemma (Thompson) from Savages, couple of the members from Damon Albarn’s (Blur/Gorillaz) band and it was a really incredible experience!"

Do you spend time in Joshua Tree?
"I love it there. One of our early shows was at Pappy & Harriets. Years ago…that was awesome. Yeah, I stopped by [Rancho De La Luna ] a few weeks ago to hang. We haven’t recorded there yet, but hopefully will one day. Last year on New Year's Eve I went out to Joshua Tree by myself and did like a meditative New Years thing. My friend owns this amazing house that she built out there.  It looks like something out of some crazy movie. So I went out there by myself and sat underneath shooting stars. I stayed out there for five days. Did some writing. I wonder if anything made it onto the album, but even if it didn’t, it inspires other writing, and one thing leads to the next."