Indian Wells Home is One of Fantasy 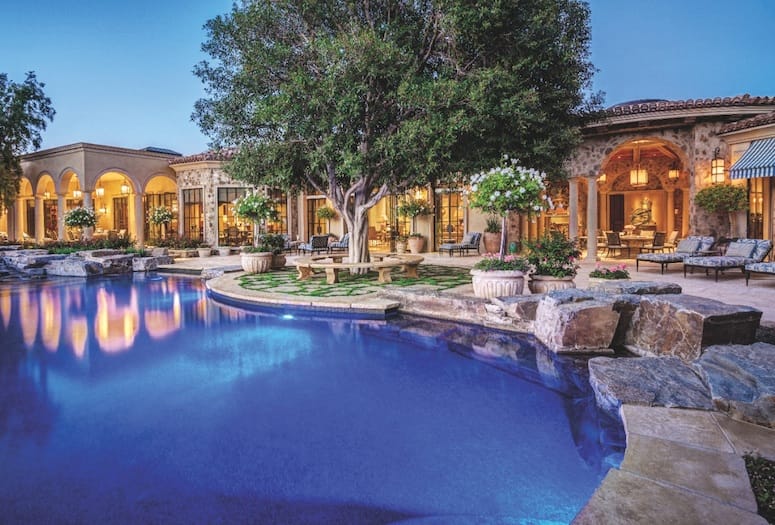 You could call them the dream team.

Builder Gerry Langlois, architect Thomas Jakway, and interior designer Thomas Allardyce have worked on several custom homes together. And what they build — well, their creations are like a dream.
The team’s latest project is a European fantasy at a private club in Indian Wells, boasting Old World craftsmanship, fine millwork, and a devotion to detail that began from the ground up. The result is a stunning, brand-new home that looks as though it was plucked from a centuries-old Mediterranean village.

Where many desert homes are chic and sparse midcentury time capsules, this stately abode is imbued with an adamantly traditional vibe.

“It feels like you’re walking into something that was here 100 years ago — and it will be there for the next 100 years or more,” says Langlois, president and founder of G.O. Langlois Construction, Inc. “Many of the houses you see these days have wide, open spaces. But this being a traditional house, there’s a lot of cozy and intimate spaces, a lot of wood and stone. It feels permanent.” 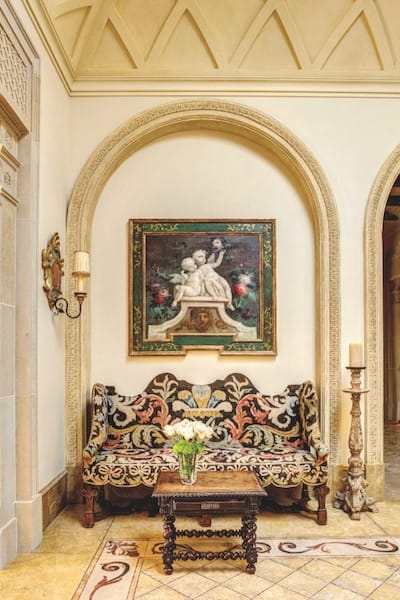 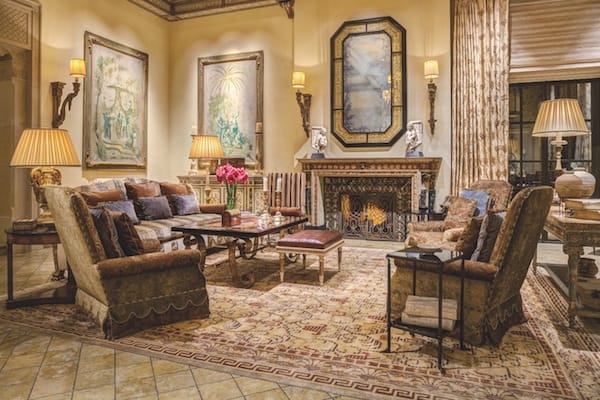 Hand-carved and fabricated white oak arches frame a vignette in the foyer. Antiques and art accent the fireplace.

The house is a tapas platter of coastal Mediterranean delights, borrowing touches from Moorish design prevalent in Spain, Morocco, Italy, and the south of France. To walk inside is to be transported.

What makes this storied structure particularly harmonious is that all members of the dream team were on board from day one. So while the architect and designer worked with the client — a family who wish to remain unnamed — the builder was on hand to ensure the vision could become a reality. And because the builder and designer collaborated from the start, details as small as electrical outlets and light switches were fine-tuned in advance.

“We work well together, which brings the house together,” Langlois says. “We have three different professionals who create a beautiful design, find the materials, find the craftsmen, do the research. And then we bring it to life.”

The project began to take shape nearly three years ago when the original house on the property no longer suited the family’s needs. That house was demolished and the team got to work constructing an elegant home with separate, ample spaces for children, grandchildren, and numerous visitors.

The new structure elegantly spans two pie-shaped lots on a curve in the road, incorporating elements that add heft and character.

Reclaimed material, such as wood from 100-year-old bridges and railroad trestles, were repurposed as box beams throughout the house. Columns were cut from Texas limestone. Massive white oak arches, which run from entry hall to main hallway, were sandblasted, constructed in one piece, then installed. 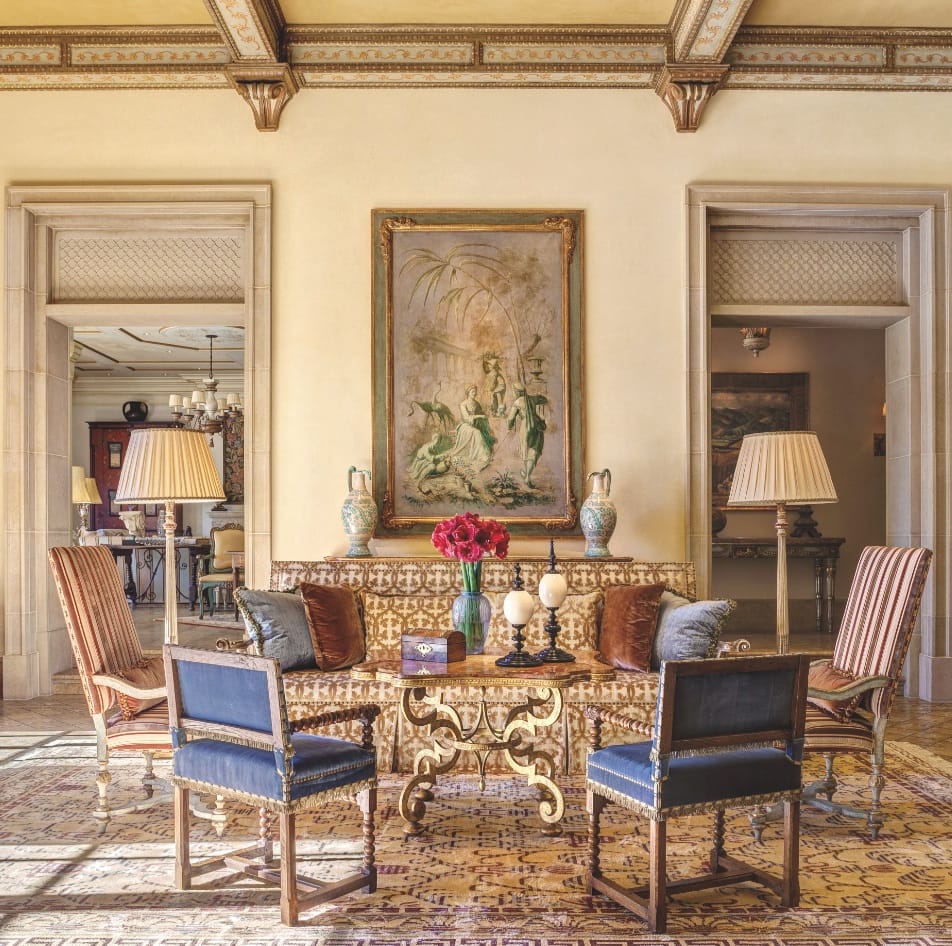 “That was one of the directions we received from the client,” Jakway says. “They wanted the house to feel real and substantial. Nothing seems like it came off a showroom floor.”

No matter what Jakway conjured in his architectural visions, Langlois found a way to make it reality.
“We don’t have the craftsmen they had in Europe a century ago, but this builder found a way to implement these very special details anyway,” Jakway says. “There was a woman on scaffolding for six weeks painting the beams. Every rosette was done by hand. Every detail is perfect.”

The marble in the house was sourced from an Italian quarry. Hope’s Windows in New York fashioned the custom steel window frames while a craftsman in Austria created the wrought iron work throughout the house.

“What you have is the result of hundreds of skilled craftsman and tradesmen from this area and out of the area,” Langlois says. 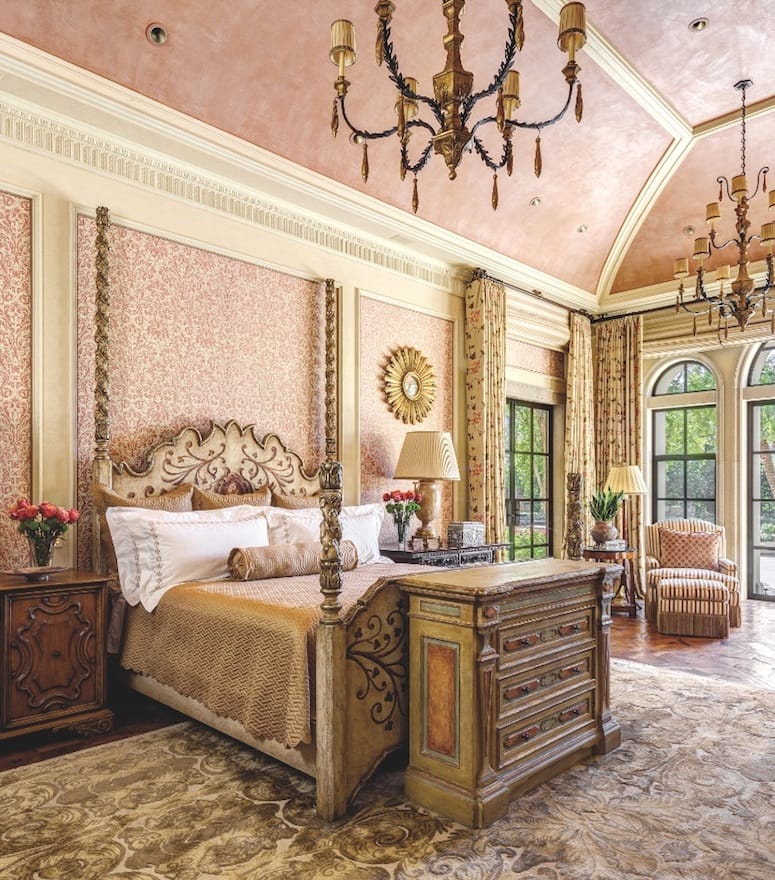 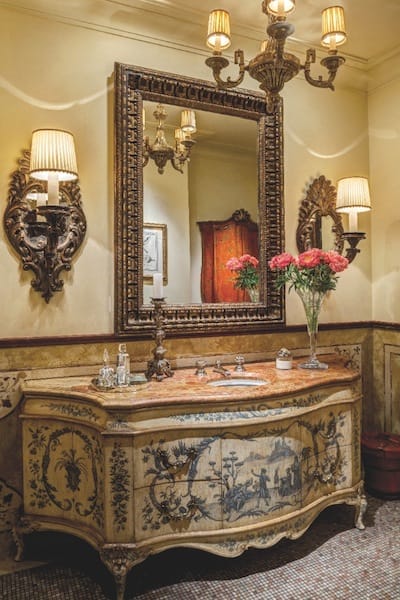 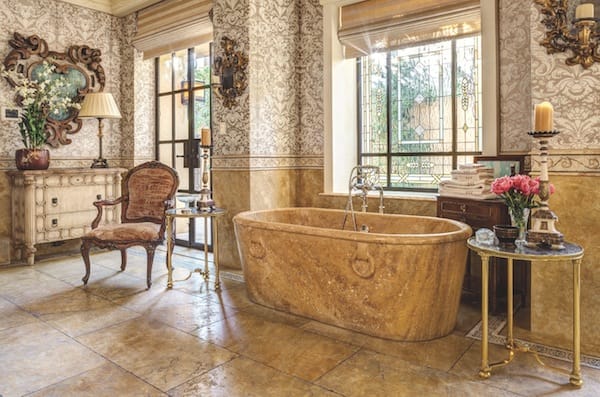 The master bathtub is carved from a single block of Italian Sienna marble. Hendrix Allardyce Design fashioned and hand-painted the powder room cabinet .

Langlois, a craftsman himself, is particular about his projects. During construction, he creates grid lines on the floor to make certain all the work is square, plumb, and level, not a fraction off kilter.

“Everything works off the grid, and that’s how we keep things precise,” he says. “A tremendous amount of detail work is laid out in advance, so we don’t run into problems.”
The house deftly flows along the road’s curve, punctuated by a grand rotunda in the middle. The positioning cultivates an alluring outdoor space, bringing together guests and residents with a wet bar, barbecue, and heated floors, all in great comfort.

Before the original house was demolished, dozens of trees and plants were boxed, then later replanted around the new structure. Landscape architect Wayne Carlton Connor concocted a dramatic infinity pool, made more spectacular by reshaping the contours of the existing lake — so the crystalline water appears to stretch to the horizon. 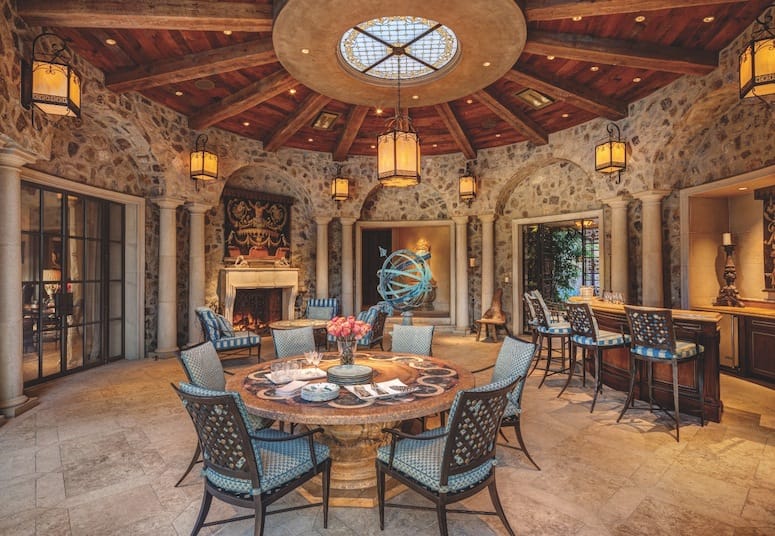 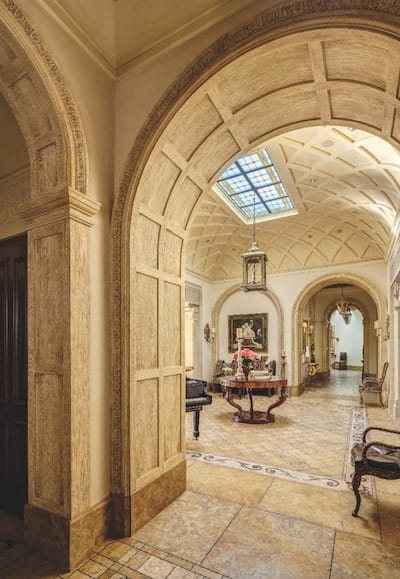 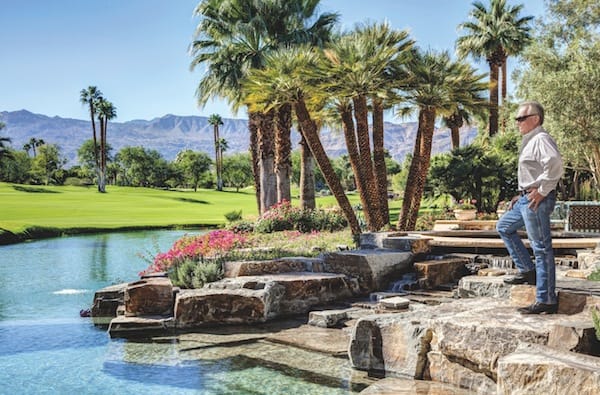 “We actually enlarged the lake to bring it closer to the shoreline, which was a tremendous project,” Langlois says. “But our objective is to bring forward the very best house, and that includes the whole package. We don’t cut corners.”

The interior conceived by Allardyce, principal at Hendrix Allardyce Design, draws inspiration from the style of Addison Mizner, the architect who injected Spanish Revival into 1920s Florida.

“It might seem like these clients have collected pieces for years because the assemblage appears so harmonious,” Allardyce says.

Reflecting on the final reveal, Allardyce adds, “It’s like a Broadway production — it’s just as finely choreographed. After months and months of putting together the rehearsal, the most joyful part for us is seeing everything assembled on site, the whole production coming together.”

What’s satisfying for Langlois isn’t just creating a dream property for the client, but also elevating the craft of creating each house.

“Our team demands more of each craftsman,” he says. “We build things to last.”