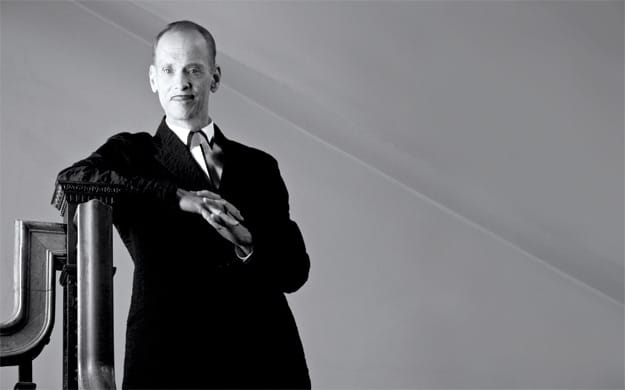 James Egan was working in his father’s insurance business in Baltimore at the time he met avante-garde John Waters at a birthday party for drag queen Divine 37 years ago. Waters called a few days later about production insurance for his next film, on the heels of Pink Flamingos. Egan wrote a policy through Lloyd’s of London misrepresenting Female Trouble as a children’s fantasy. When his father found out, he insisted his son be on the set every day to protect their potential exposure.

After sitting in on that and Waters’ subsequent movie set, Egan decided to pursue his own career in filmmaking. Now living in Palm Springs’ Movie Colony four days a week and in West Hollywood three days a week (he teaches screenwriting at USC School of Cinematic Arts), Egan remains friends with Waters and visits him at his homes in Baltimore and San Francisco.

Two-and-a-half years ago, University Press of Mississippi asked Egan to compile interviews of Waters for its Conversations with Filmmakers series.

“When I called [Waters] up, I was a bit hesitant, because I wasn’t sure he knew about the series,” Egan recalls. “He said, ‘Well, it’s about time,’ and I started laughing, because I knew this meant he would be very cooperative.”

Cooperative, yes — but also, Egan admits, “There were some very … vivacious discussions. After all, this book is his legacy that scholars will refer to when looking at his career.”

Because the university press is a nonprofit publisher, Egan had to rely on his own resources. “I knew this was a big undertaking, because John is one of the most covered filmmakers, so I applied for a grant at USC — and won it,” he says. “That provided me with funds to visit archives around the country.

“The purpose of the book is to bring to light the interviews the public wouldn’t ordinarily have access to that were pivotal to defining John’s career,” he explains. “And that was the toughest part of the research, because there were many, many choices.”

Egan and Waters launched John Waters: Interviews in October at USC with a screening of Pink Flamingos, followed by a Q&A and book signing. In November, they appeared for Q&A sessions and signings at the Museum of Modern Art in New York and Harvard University’s bookstore and took the stage at a gala in Baltimore to raise money for the city’s public library.

In December, Egan launched the book at Just Fabulous in Palm Springs.

“Palm Springs is a city that totally gets my work and has always been supportive of my quest against the tyranny of good taste,” Waters says. “But the real reason I like the town is that when I’m there my hair dries when I step out of the shower even before I have time to grab a towel.”

The following excerpt from John Waters Interviews is provided here with permission. This interview was conducted by Jamie Pinter Young in 2000 after the release of Waters’ film Cecil B. Demented. It was published in James Egan’s compilation of interviews with permission of e5 Global Media, LLC.

JY: Is there such a thing as a “John Waters actor” or “acting style”?

I very much try not to do that now. My direction to anybody now is, “Bring it down.” Over the years, you have to change what you’re doing — reinvent it a little bit. And the way to reinvent it was that it seemed finally more shocking and more surprising to have actors saying the words as if they believed every word of it, rather than hitting you over the head with the dialogue. And I’m not saying I don’t like my early films.

For the acting style in [Cecil B. Demented], I told them to play it as if they believed every word of it, and that has been my direction ever since hairspray — to never wink at the audience. Even the most ludicrous dialogue or action. Like when Stephen [Dorff] licked the Panavision camera, I told him, “Don’t do it campily. Do it like you are turned on by the camera.” And I think my dialogue that I write comes out, now, funnier that way.

I think in the old days when my films were made primitively, which means badly, basically, I didn’t know what I was doing technically. They looked like documentaries. They looked like Blair Witch, without knowing it. So it worked for that. People believed we were those characters, that we lived in a trailer, and that we ate dog shit. That’s how it’s changed over the years.

JY: So what are your criteria for casting?

JW: It gets down to who did the best reading, and I can tell in one second. In a way, they just have to know [what I want]. Because sometimes it’s a cold reading. I don’t tell them what to do. Ricki Lake [Hairspray, Cry-Baby, Serial Mom, Cecil B. Demented] came in and read it perfectly the first time — exactly how I’d been playing it in my head. Christina Ricci [Pecker] did the same thing. They can’t know, but they do know somehow. They say it with the exact inflections and the exact way I’ve been playing it in my head. I don’t know how to explain that, but it’s intuitive.

JY: Who are your favorite actors?

JY: Has anyone ever refused to do something you’ve written?

JW: No. I can tell the ones that will be trouble right when I meet them, and I don’t hire them. They have got to have a sense of humor or they’ll never get through it with me. I don’t care if they’re Method actors; I’ve worked with them all. But I know what I want, and they generally like that. I think actors hate it when the director says, “What do you think?”

And I do listen. We have rehearsal. I love rehearsal and we do it for a week in my living room — for every movie since Multiple Maniacs. I think that settles everything and everybody gets to know one another.

JY: You are poking as much fun at independent cinema as you do Hollywood.

I’ve said it before but it’s true, Hollywood is the World Trade Center of movies. They’re not going to be hurt that I made fun of them.

JW: Well, when I first said that, “socially redeeming” was a joke. That was the term used by the Supreme Court to show full frontal nudity. It had to be “socially redeeming.” That’s why Russ Meyer would have movies where people were nude and talking bout communism and stuff.

I prided myself on having no social redemption, but they do. Because outsiders win. Fat girl gets the boy. Things that don’t happen in real life happen in my films. I ask you to root for outsiders, for serial killers, for terrorists, for people who are generally the villains in other movies. I’m asking you to always look at people in a different way, and through humor is how you change people’s opinions.

So if you ask me, “Are you now or have you ever been socially redeeming?” I guess I’d have to say, under oath, maybe. But I don’t hit people over the heads with a message. My message in [Cecil B. Demented] is not “I hate Hollywood.” Are you kidding? I have a limo. I fly first class. I’m staying at a beautiful suite in the Chateau Marmont. I’m not living in my car, hitchhiking here, which is how I first came to L.A. I have great memories of that. Do I want to do that today? No. However, you need to have done that.

JY: When you made Hairspray, I think there was a perception among your fans that you “went Hollywood.”

JY: And that you weren’t so subversive anymore.

JW: Subversive, to me, is the fact that Hairspray became one of the best-selling videos for children’s birthday parties and it starred a drag queen. That’s subversive.

When I started, the first thing I ever wanted to do was a successful beatnik movie. Then I wanted to make underground movies, and they didn’t have them anymore. Then midnight movies — they didn’t have them anymore. Then independent movies. Then Hollywood copied them. Then I made weird Hollywood movies. And now I make all of them put together. This is what I made with Cecil B. Demented.

So, hopefully, I’ve created my own genre that I don’t believe anybody else copies and that you can tell is my movie in the first couple of minutes. And that’s what I want to continue doing, and that’s hard. Woody Allen does it. He has the career I’d kill for.

JY: What’s your favorite part of the directing process?

JW: I naturally like telling people what to do. [Laughs] To me, writing is the most fun of making a movie. There’s more creativity in that than anything else. Writing, in a way, is also the scariest and the hardest part of directing because I can’t blame anybody. It’s just me and my imagination. That’s my job — to go to my desk every day and think weird stuff up. I’m never bored. I’m always watching people. I’m a voyeur. I listen and eavesdrop on conversations a lot.

JY: Will you ever do a serious movie?

JW: They’re all serious, in a way. I mean, I’m serious about my career. I’m serious about comedy. But what’s serious? To me, humor is how you change people’s opinion. It’s how you get people to take up your point of view. It’s how you protect yourself. It’s everything. It’s what love is based on. It’s what friendship is based on. It’s the only thing, really, about how I judge if I like a person or not. And people without a sense of humor must live a very boring life, in a way. If you can laugh at the worst thing that ever happened to you, then you’ll always survive.