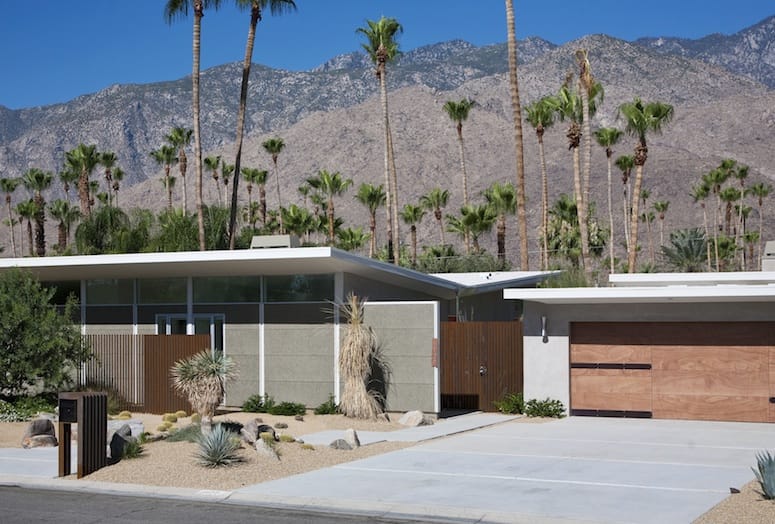 A blank canvas can be a daunting thing, but it can also inspire creative visions that transform nothing into something incredibly special.

In 2008, Jerry Markovitz and Cameron Jobe, whose primary residence is in Los Angeles, purchased an empty lot in the Deepwell neighborhood of Palm Springs with the idea of building a midcentury modern home. The backyard features a jacuzzi and a saltwater pool with a tanning shelf and umbrella receptacle. The zero-scape, drip irrigation landscaping, which was designed by architect Sean Lockyer, keeps things low maintenance.

“I’ve been coming here since I was a kid, my dad has a place in Rancho Mirage,” says Markovitz. “Cameron and I would rent houses and try different neighborhoods — Twin Palms, Vista Las Palmas, Deepwell — and we looked at existing houses that needed a lot of work, or the work that had been done was not what we liked. But we definitely wanted a midcentury modern house.”

As it turned out, the couple’s realtor had a relationship with a contractor who had recently entered into an agreement with architect William Krisel to build his butterfly houses using the original plans. “We liked that idea better,” says Markovitz. “We thought, in 20 years do we want a 20-year old house or an 80-year-old house?” A covered patio outside the casita provides an outdoor dining/cooking area along with a fire feature by architect Sean Lockyer.

Local architect Sean Lockyer drew up the final plans for the 1,700-square-foot house and he suggested rearranging things a bit. Most Krisel butterfly houses are a 40-foot by 40-foot square with the three bedrooms across the front of the home, the kitchen/living area in the back, with the butterfly to the street.

“But Sean asked what we thought about flipping the roof 90 degrees and taking advantage of the mountain view,” says Markovitz. “We wouldn’t be able to call [the house] an original Krisel, but we were okay with that. We chose this lot because the back faces the mountains and now the clerestory windows go all the way across and open the view.” Lockyer also modified the space a bit so the footprint is 40 feet by 42 feet. “In the original houses, the bathrooms are quite tight so we added a couple of feet and it made a big difference,” notes Markovitz. “And we tweaked the kitchen to be a bit larger. Instead of a pass through to the dining area we opened it up to have a more contemporary, great room feel.”

The couple also tasked Lockyer with designing a 400-square-foot detached casita. “He showed us variations and was able to rotate the casita in different seasons and go through the days, which was really helpful in how we were going to build it out,” says Jobe. “We wanted something that would be totally isolated from the main living residence, that would allow our guests to come down to the desert and enjoy the fun with us but not be communal.” The kitchen cabinets are a walnut veneer and frame a vintage-inspired ceramic tile backsplash. The countertops are Caesarstone. The elephant car wash image in the entry is by Palm Springs photographer Gary Dorothy. “It brings back good memories for me since my dad lives in Rancho Mirage and I remember that sign from when I was a kid,” says Markovitz.

All of the cabinetry and countertops in the casita are the same as the main house providing a seamless continuity and integrity to the design. The couple’s friend, local designer and fabricator Jeff Read, selected the draperies and chose the fabrics for the bedding and pillows in the casita. He also designed the bedding and draperies in the master bedroom.

Markovitz and Jobe moved into the house in January 2010 and their blank canvas is now such an iconic aspect of the neighborhood that it’s part of the “Stars and Star-chitects in Deepwell” walking tour. The homeowners found the vintage kilim at Hazal Kilim on one of their trips to Istanbul. The side tables and bed are from Seventh & Seventh Designs in Los Angeles. The Model A table lamps are by designer Joel Dessaules. Modifying the standard 40-foot by 40-foot butterfly floor plan to 40 feet by 42 feet allowed the homeowners to gain some extra space in the master bath. The room features glass tile, heated floors, and an outdoor shower accessible through a sliding glass door. The 400-foot casita has the feel of a luxe hotel suite. An interesting architectural feature is the garden window along the floor. The bedding and pillows were designed by Jeff Read.