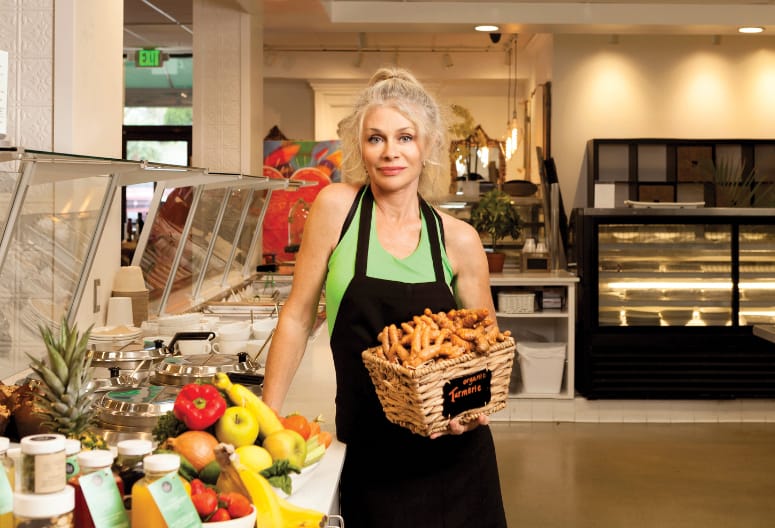 Serial super-entrepreneur and fitness guru Denise DuBarry-Hay’s workload would defeat most mere mortals. The TV and film actress, former Malibu celebrity yoga coach, and infomercial mogul also runs Bikram Yoga Plus in Palm Springs and Palm Desert, and produced two feature films — Shoot the Hero and Do It or Die (both shot in the desert), and executive produced several others.

She recently opened Wildest Greens, an organic fusion restaurant in Palm Desert. “My business life merged with my lifestyle when I created Wildest Greens,” she says. “We start with the notion that food is medicine, but it has to taste like a gourmet meal. We want to give our customers foods that can heal.”

Dishes are created from scratch using organic ingredients, including cold-pressed juices, nut mylks, and kombuchas, as well as dressings made with spice flown in from her family’s turmeric farm in Kauai. “We also offer healing, house-made bone broth cooked for over 50 hours, a cleansing Ayurvedic kitchari stew, and an immune-building, tasty eight-mushroom soup, along with vegan chili,” she says. Specialty coffee, salad, and smoothie bars allow patrons to hand-pick their own delights, and wine and beer are on tap, too. “We offer delicious foods that cater to almost all eating styles, including vegan, paleo, keto, and flexitarian.”

The desert is the perfect spot for this new venture, she explains, “because it attracts people who care about their health and wellness.”

VIDEO: Denise Dubarry-Hay talks about how health and wellness has been a big part of her life.