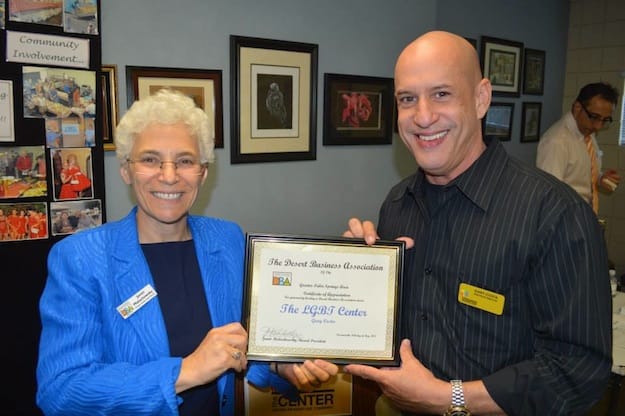 While Janet Malachowsky’s professional experience in banking and finance has always focused on “educating people to prepare for life”, her personal love of learning and sharing lends itself to her new position as president of the Desert Business Association (DBA).

“I always want a level of engagement,” said Malachowsky. “I’m not a temporary type of person. I’m involved with my friends, clients, business, family and things I have an interest in. I get a thrill out of connecting people and situations that make things happen in a positive manner. The DBA is poised for such interaction”.

Malachowsky is the DBA’s first lesbian president in more than 10 years. She originally joined as a board member charged with recruiting more women and lesbians into the traditionally male organization.

Established in 1979, the DBA has been an open door for gay, lesbian, bisexual and transsexual business professionals who may not have felt included in mainstream chambers or networking groups. The DBA promotes and supports LGBT and allied business interests and professionals working together to promote economic development, education and humanitarian causes.

Beyond a typical networking group, Malachowsky differentiates the DBA, noting, “We have fun getting to know our members and partners in a truly interested and invested manner,” she said. “You’re not just a pinball passing out your card."

“We want intimate business coalitions in which we engage in conversation, add value and have cross centers that work together,” she continued. “I think this is really the best chamber to get to know very talented individuals who are integrated into this community and are tops in their fields of expertise.”

A native of New York and a financial advisor with Morgan Stanley, Malachowsky brings her self-described “diversity and directness” as well as her savvy business acumen to capitalize upon the growing strength of LGBT professionals.

“I am all about engaging, connecting and educating,” said Malachowsky.

One of Malachowsky’s goals is to further promote diversity within the DBA through public outreach and recruitment. Like many growing organizations, the DBA has struggled within its ranks to bring differing LGBT groups together.

“If you don’t reach out beyond yourself and you stay with your own kind, you are missing out and you know, I think that’s the trouble with the world,” she said. “If you don’t get out there to taste or hear something different, you’ll never learn more than what you know.”

Her open and welcoming approach goes straight to the DBA’s mission to further forge alliances and partnerships beyond the LGBT community.

“It’s all about learning”, Malachowsky said. “Knowledge is power – the more you learn, the more you can educate, evoke positive change and prosper."