German-born William Pester’s simple hut in Indian Canyons was a popular destination for the valley’s early tourists. No fool, Pester charged to have his photograph taken.
PHOTO COURTESY OF PALM SPRINGS HISTORICAL SOCIETY

Long before the hippies, there were California’s famous Nature Boys, free spirits who believed in living in harmony with nature, eschewing shaves and haircuts, clothing themselves minimally, and devoting themselves to clean living through vegetarianism, outdoor exercise, and other means.

California’s Original Nature Boy was William Frederick Pester (b. 1885), a German from Saxony who migrated to the U.S. to escape military service. A devotee of Lebensreform (life reform), Pester was influenced by German writer Karl May and sought out a life among indigenous peoples in the U.S. in an effort to emulate what he believed to be the simplicity of their lives and connection to nature. He eventually built a shack with a roof of palm fronds in Indian Canyons and by all accounts was tolerated by his Cahuilla neighbors.

It could be argued that Pester was the first bona fide celebrity to emerge from the Coachella Valley. Well before Hollywood royalty made Palm Springs their winter playground, Pester was the most well-known personage in the desert. It became de rigueur for visitors such as Zane Grey and Rudolph Valentino to drop in on Pester and have their picture taken with him (he charged for each photograph) while he played his guitar.

Though there’s no hard evidence they ever met, it’s believed that musician and proto-hippie eden ahbez wrote the Nat King Cole song “Nature Boy” about Pester. Released in 1947, the song became a huge hit for Cole and made something of a minor star out of ahbez who (by choice) lived under one of the L’s of the Hollywood sign and subsisted, like Pester, on a raw diet.

However, Pester experienced a very different kind of celebrity in the ’40s. In 1940, Pester was convicted of sexually related offenses with a minor and spent the next six years in San Quentin and Folsom prisons. 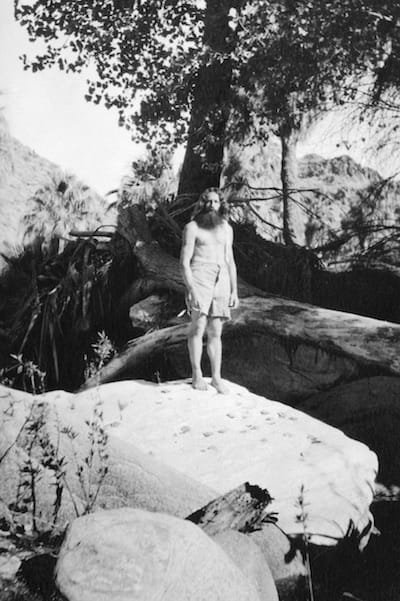 PHOTO COURTESY OF PALM SPRINGS HISTORICAL SOCIETY
William Pester, uncharacteristically clothed, adhered to a raw diet, had a huge beard, and played guitar. In other words, he’d be virtually indistinguishable from half the Joshua Tree hipsters of today.

When he returned to Palm Springs in 1946 after his release, he was dismayed to see the amount of development that had taken place. Though he married and was said to be living in Los Angeles in 1948, very little is known of his later life. He reportedly died in Arizona in 1963 at the age of 78.

He was born in 1885 on the Sioux Reservation in the Dakota Territories, where his parents ran a trading post. His unusual last name is actually an Anglicization of a Dutch name, Jurckse. Yerxa’s ancestors were Old Dutch loyalists in the New York region who immigrated to New Brunswick, Canada, following the American Revolution. Yerxa’s father was peripatetic himself and moved his family to wherever there seemed to be opportunity. The Yerxas lived in Mexico, Cuba, Seattle, and Riverside, California, constantly seeking out the next possible fortune.

After many youthful explorations including living among the Inuit in Alaska and working as a traveling grocer for Klondike miners, Yerxa may have settled down for good on the family’s citrus ranch in Riverside if the great frost of 1913 hadn’t devastated the Yerxa groves. 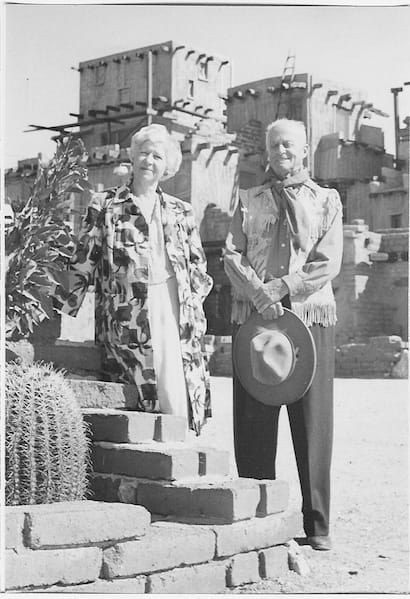 Cabot Yerxa and his wife outside the pueblo he constructed near the site of his discovery on Miracle Hill of both hot and cold underground springs.

While the rest of his family moved north to the Bay Area, Yerxa decided to explore the neighboring desert. Though he left to serve in France in World War I (and stayed afterward as an art student at the Académie Julian in Paris), he eventually returned to the remote area north of Palm Springs to homestead. After roaming the desert, he settled on a piece of land he called Eagle’s Nest and built a crude one-room cabin. Tired of the 14-mile round trip to fetch water from Garnet, he dug a well and discovered a 110-degree hot spring. He then dug a second well about a quarter mile from the first and discovered sweet-tasting cold water. Yerxa might be called an intuitive geologist because he’d inadvertently dug his wells on opposite sides of the San Andreas Fault.

Yerxa spent the next couple decades running grocery stores around Southern California before he returned permanently to the 150-acre parcel he renamed Miracle Hill. He began building his pueblo in the early ’40s, making traditional adobe bricks and scouring the desert as far away as the Salton Sea for abandoned detritus that he could recycle and incorporate into his castle.

By the time he completed it, 20 years later, Yerxa’s vision included 35 finished rooms and more than 150 windows in a multistory structure that featured a trading post; a second-floor apartment suite for his second wife, Portia; and a third-floor classroom and art gallery where the couple entertained their artist friends and presented lectures on theosophy and UFOs. 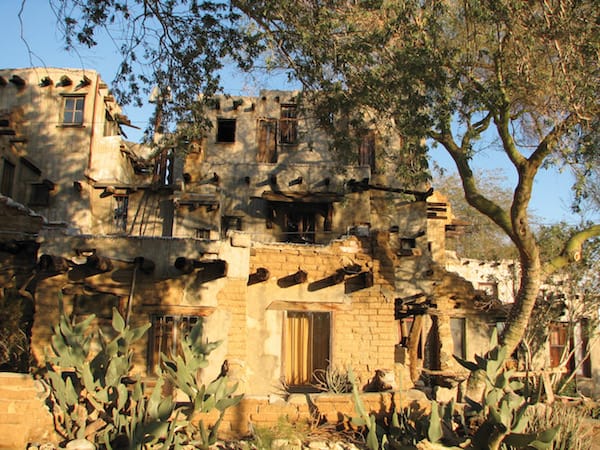 Cabot's Pueblo Museum was donated to the City of Desert Hot Springs.

When Yerxa died in 1963 at the age of 82, his wife left the property and returned to her native Texas. Developers almost leveled the pueblo, but one of Yerxa’s friends barred bulldozers with a shotgun held at half-mast. The property was saved and eventually donated to the City of Desert Hot Springs.

The Vermont native did not receive his calling in life until he was nearly 36. Up to that time, Leonard Knight admittedly did not have a lot of direction. He was raised on a farm outside of Burlington, dropped out of school at 15 to work in a factory, and then was drafted into the army during the Korean War. After he got out, he returned to Burlington and worked as a body and fender man in a car dealership. On the side, he gave private guitar lessons.

Then, while visiting his sister in San Diego, he experienced a religious epiphany in the back of his van. He became an enthusiastic proselytizer for Jesus Christ. He returned to Vermont to try and spread the simple yet powerful wisdom that “God Is Love,” but was rejected by many of the churches he entered. Witnessing a hot air balloon pass over his town one day, he decided his mission was to construct a giant balloon with his message painted on the side. 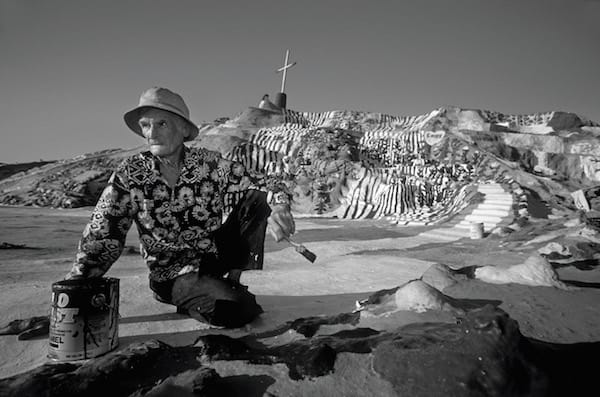 Leonard Knight spent years trying to get his message of “God Is Love” aloft on the surface of a hot air balloon. The monument that became Salvation Mountain was an afterthought that grew, and grew, and grew.

He traveled west, first to Nebraska, and then to Quartzsite, Arizona, endlessly sewing and improving his balloon. By the time Knight arrived in Slab City, east of the Salton Sea, he realized he was never going to get the balloon to fly. He decided that before leaving Slab City — named after the slabs of concrete left behind after the army base that had stood there was dismantled — he would construct a small monument with a few bags of cement.

And then it grew. Snowbirds donated cement and cans of paint. When he ran short of cement, Knight used more sand. And then Salvation Mountain, as it came to be known, collapsed.

Undeterred by the loss of four years’ work, Knight set out to rebuild and fortify his mountain with adobe clay. He used less sand and more straw. Poured an estimated 100,000 gallons of paint over the surface to make it nearly impermeable and indestructible.

Though Knight’s extraordinarily colorful masterpiece has survived assaults by the state and harsh weather conditions, the site was cited in the U.S. Congressional Record by Sen. Barbara Boxer, who decreed it “a national treasure.” Salvation Mountain has been visited by countless tourists and featured in a number of films, including Sean Penn’s adaptation of Into the Wild. Knight entered a care facility in El Cajon in 2011 and died there, at the age of 82, three years later. To support and maintain the mountain, Salvation Mountain Inc. was created.

Ohio-born George Van Tassel got his start working on cars in a garage in California in the 1930s. There, he met an eccentric German prospector named George Critzer, who told Van Tassel of a claim he was working under a seven-story boulder in the High Desert near Landers, still popularly known as Giant Rock. Suspected of being a German spy, Critzer was killed by police in a shootout at the rock in 1942. At the time, Van Tassel had a thoroughly reputable career in the aeronautics industry. He applied to the Bureau of Land Management for a renewable permit to develop an airstrip near Giant Rock.

In 1947, Van Tassel moved his family out to the rock, where they lived in cave dwellings that Critzer had built beneath it. He also began developing the property, which would eventually comprise a home, a cafe, the airstrip, and a dude ranch. Van Tassel told the meditation practitioners who gathered in rooms under the rock that he had been visited by an alien from Venus. The being took him aboard its spaceship and imparted to him knowledge that would enable him to build a structure to rejuvenate the human body. This “integratron,” as Van Tassel described it in writing, was “a ‘time machine’ for basic research on rejuvenation, anti-gravity, time travel.”

Over time, the domed structure took shape on his property and became well known for annual gatherings of UFO enthusiasts (and, like Van Tassel, “contactees”). Until Van Tassel’s death in 1978, the conventions attracted thousands of attendees. Unfortunately, Van Tassel died just weeks before the Integratron’s official opening. 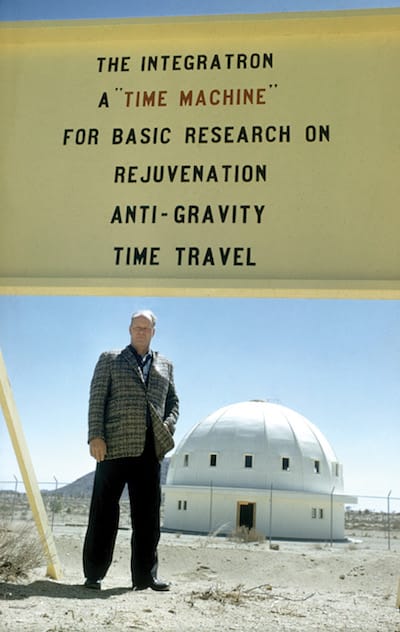 George Van Tassel stands outside his nearly complete Integraton whose specifications were reportedly communicated to him by aliens. The kind from outer space. 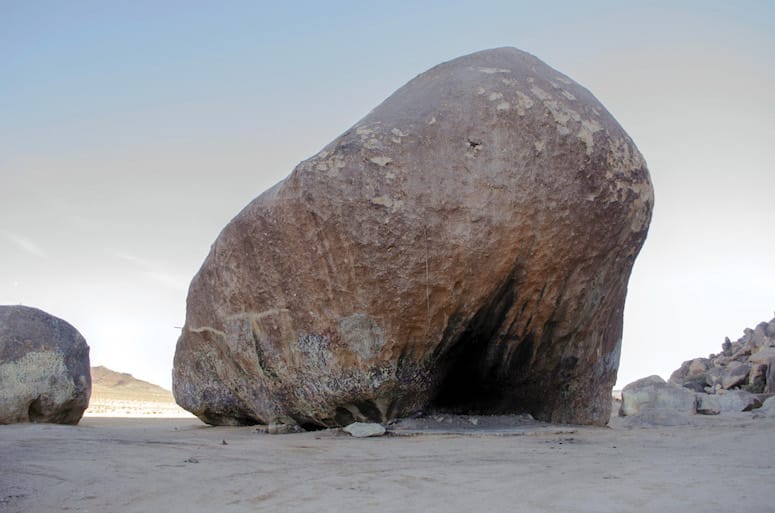 The Giant Rock in Landers became home to Van Tassel and his family. About an hour drive from Palm Springs and just a few minutes from the Integratron, the boulder is an impressive seven stories tall.

He built the 38-foot-tall, 55-foot-diameter Integratron structure entirely of nonferromagnetic materials to maximize a unique resonant electromagnetic frequency that he believed would have a positive effect on the cells of the human body.

After existing in various states of disrepair for 20 years, the Integratron was bought by three sisters and restored. It is now open for sound baths, a meditation-like therapy that may not be too far removed from the experience Van Tassel envisioned.

“Van Tassel told the meditation practitioners who gathered in rooms under the rock that he had been visited by an alien from Venus. The being took him aboard its spaceship and imparted to him knowledge that would enable him to build a structure to rejuvenate the human body.”