A small town north of the Salton Sea, Mecca claims the lowest elevation post office in the United States. Photographer Susie Keef Smith took a job as postmaster here in 1926 and began making postcards to sell on the P.O. spinner rack. A second photographer — her cousin, Lula Mae Graves — soon joined her, and they proceeded to document the mysterious expanse east of Mecca.

Unlike their better-known counterparts, postcard photographers Stephen H. Willard and Burton Frasher, Susie and Lula have been forgotten. After Susie died in 1988, her life’s work was almost lost when a county estate administrator threw away her belongings. A savvy archaeologist jumped into a dumpster to rescue many of the images you see here.

This buoyant buddy story from the desert outback comes back to life in a book, Postcards from Mecca: The California Desert Photographs of Susie Keef Smith and Lula Mae Graves. I became involved with the story after writing about Susie years ago for Palm Springs Life. I worked with Cathedral City artist Warner Graves III, the grandson of Lula Mae Graves, to edit the book and curate the exhibition. Both introduce a slice of desert you might have overlooked on the long drive from Palm Springs to the Arizona border.

In this excerpt, Susie Smith — wearing a full leg brace due to childhood polio — starts her new job and meets the prospectors, cowboys, burro packers, and aqueduct builders inhabiting the desert to the east. 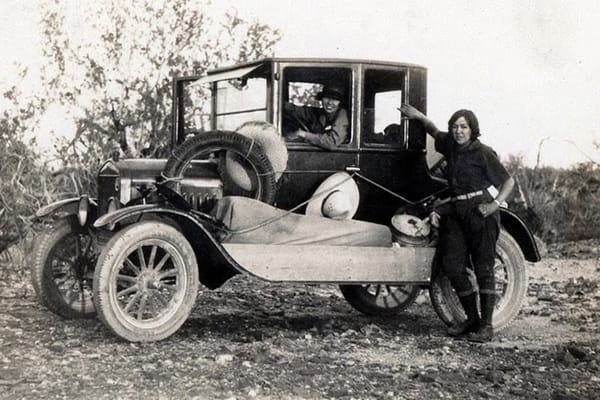 Susie Smith and Lula Mae Graves paved their own roads through the desert. 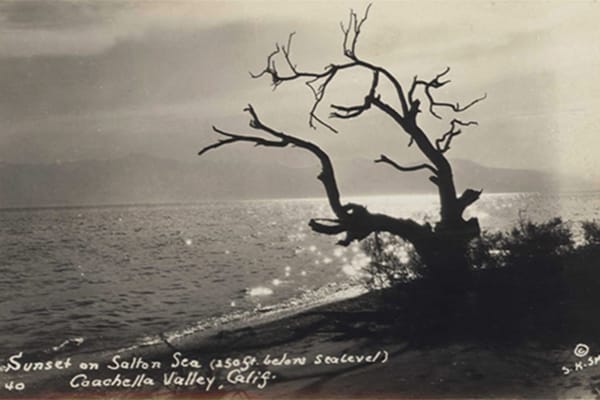 Sunset on the Salton Sea, photographed by Susie Keef Smith.

It was Susie’s father who encouraged her to apply for the job of Mecca postmaster in 1926. When she landed the job — beating out two male applicants — her father gave her a .38 revolver and instructions: If anyone bothered her she should “aim at the middle of the person.”

She eventually accessorized with a holster, wearing a sidearm at all times. The protection was handy when she worked late preparing packages for the railroad mail agent, and when she carried cash and stamps home with her in the evenings. The job jumpstarted her transition from lost teenager to self-assured Western woman.

The post office itself resembled a boys’ clubhouse, with old tortoise shells, bighorn sheep horns, and snakeskins crowding the shelves. Maps of the desert were tacked to the walls. The magazine rack in the small quarters was stuffed with titles such as Ranch Romances, Wild West Weekly, Thrilling Adventures, and Railroad Stories. The cowboy hero Tom Mix was popular at the time; cowboy style seeped into popular awareness via the movies and magazines. Susie would start dressing like a character right out of the pulps; her cousin Lula would sport a high-crowned Stetson like the one Tom Mix made famous.

The post office was an ideal base for a budding documentary photographer. In those days, the small-town P.O. doubled as town hall. In this case the town stretched from the Salton Sea to Desert Center and up to Pinto Basin — a lonely no man’s land of cowboys, miners, teamsters, and bandits. When Gen. George Patton later trained troops for desert warfare in this same region, his men called it The Land That God Forgot.

Susie Smith, postmaster, found herself at the hub of activity for the entire region. She became a crucial social contact for all the swashbuckling characters who worked in the desert country to the east. In 1929, she gained a sympathetic sidekick in the form of her cousin, Lula Mae Johnson Graves. Almost 10 years younger (age 21 to Susie’s 29), Lula grew up near Chattanooga, Tennessee. With Lula’s father dead and her mother working to support the family, she and her brother Maury spent their days running feral on Lookout Mountain, the site of a major Civil War battle. 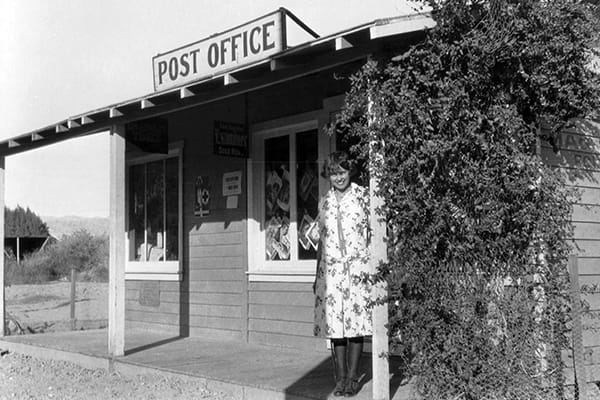 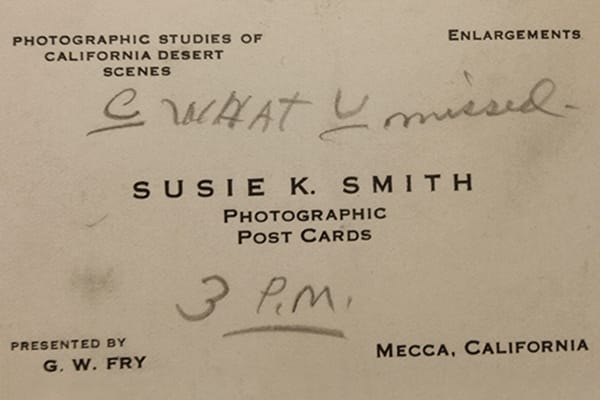 Susie and Lula Mae would soon learn to handle rattlesnakes, ride broncs, and tame chuckwallas (giant baggy-skinned lizards). Some young women did these things reluctantly to please their dates; Susie and Lula seemed to thrive on direct contact with the canyons and creatures.

All the exotic characters of the desert came to see Susie in the post office. Frank Coffey came in from Dos Palmas with his string of burros. The asthmatic prospector Charlie Brown came from his cave dwelling at the Iron Chief Mine to collect his mail. Fig Tree John, the itinerant Indian, dropped in wearing his signature stovepipe hat with a bowie knife sheathed to his back by a leather strap.

Essential to the cousins’ liberation was the camera. Susie “made pictures,” as she put it, with a Kodak No. 3A folding pocket camera, and later a Graflex. The newly developed Graflex would become the standard for professional photographers of the era. Imagine the power of this still-novel device in the hands of a disaffected young woman on the edge of the desert frontier in the 1920s. It was the equivalent of handing an electric guitar to a teenager in the 1960s.

The art of photography had come of age around the time Susie was born. As the last vestiges of the West were fading, there was a rush to capture the places where the feeling lingered. As part of this effort, in the 1900s to 1940s, well-known photographers sought the extreme landscapes of the Coachella Valley, among them Edward Weston, Ansel Adams, Edward Curtis, and regionally known figures like Avery Edwin Field, Fred Clatworthy, and Stephen H. Willard. Burton Frasher, the largest producer of postcards in the West, traveled throughout the California desert in the mid-teens through the 1950s. 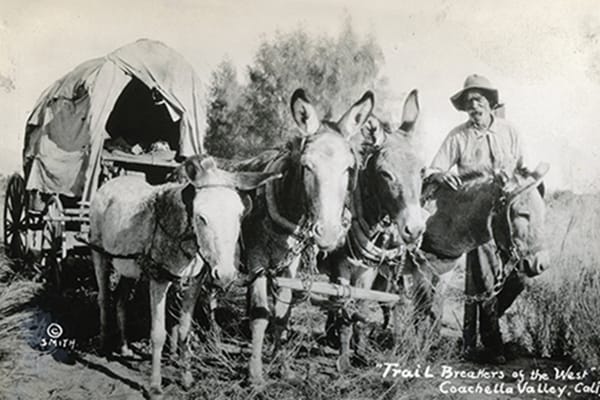 Trail Breakers of the West, photographed by Smith 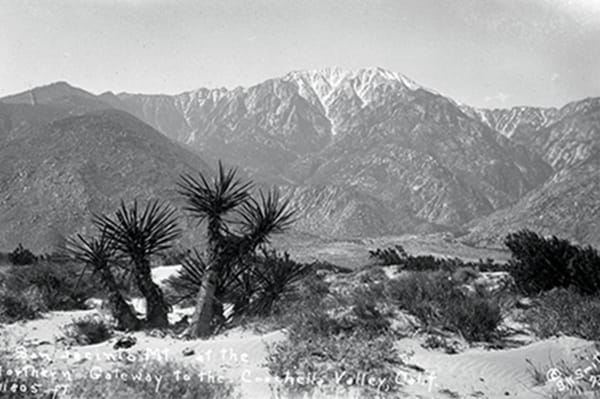 San Jacinto Mountain at the Northern Gateway to the Coachella Valley, Calif., photographed by Smith.

The celebrated photographer Dorothea Lange visited the Coachella Valley and documented fieldworkers as part of a U.S. Farm Security Administration project in 1935. Because the agricultural fields were concentrated near Mecca, Susie likely knew of Lange’s visit and may have been inspired to emulate her documentary work.

Like Susie, Dorothea Lange had suffered childhood polio; for both women the illness resulted in a withered right leg. Paradoxically Lange once said, “It [polio] was the most important thing that happened to me, and formed me, guided me, instructed me, helped me, and humiliated me.”

Wearing a full leg brace, Susie explored by burro, foot, and Ford through sandy washes and roadless canyons with a large-format camera and a .38 revolver by her side. She once said, “I made my own roads and took pictures for pleasure.” Both Susie and her subjects took obvious delight in finding themselves healthy, young, and free in the wide-open desert.

Central to the cousins’ endeavors was the Model T Ford. It was Susie’s father, Jim Smith, who taught her to repair cars, drive tractors, and to plunge fearlessly into the wilderness. “Dad taught me mechanics, had me take the entire motor apart under the old mesquite tree, and put it back together again,” Susie once wrote. “And when I cranked it, the motor ran! I was proud of that.”

Smith Plays with a Kingsnake at the P.O., photographed in 1930 by Graves 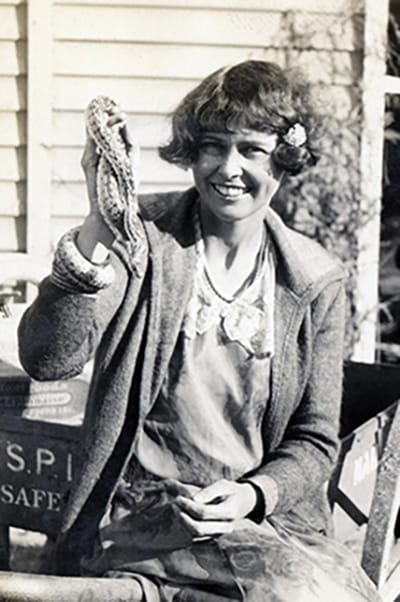 The small-town P.O. doubled as town hall. In this case the town stretched from the Salton Sea to desert center and up to Pinto Basin — a lonely no man’s land of cowboys, miners, teamsters, and bandits. 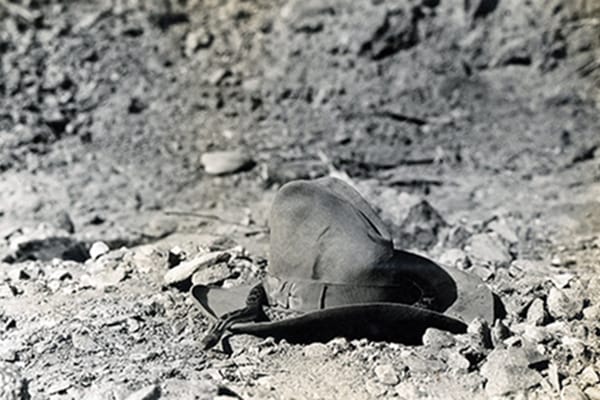 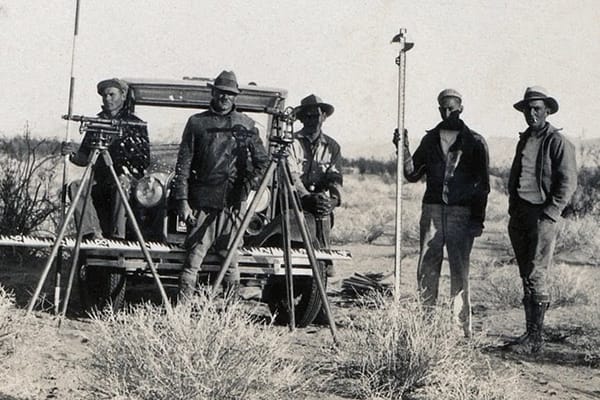 Surveyors for the Colorado River Aqueduct

Once Susie learned to drive and fix cars her options expanded, but there was still her mother to contend with. Susie was suddenly popular with boys and her mother bridled at the development. “Poor girl she seems to have lost all sense,” Susie’s mother wrote to a relative. “I can’t understand it unless she has demon possession.”

In fact, Susie would elicit adoration from men throughout her life. Even after her death, an unbroken chain of modern-day archaeologists and historians has fallen to her charms. The late Mecca-born citrus farmer Paul Ames used to moon after Susie as he watched her riding backwards in the bench seat of her parents’ Model T. “I was in love with her as a small boy,” he once said. “There was a lot of lady there.”

To deal with parental friction, most young women living in Mecca in the 1920s would have turned west toward the budding Hollywood getaway of Palm Springs, or even farther west to Hollywood itself.

Instead Susie and Lula looked east, to the unrestrained and little-traveled desertlands from Mecca to Blythe. The Big Unknown. Women artists of their era yearned for such places, where there was no society or art establishment to corral them. In these “strange, big, wild places” women were “beyond the reach of request or command,” wrote Patricia Trenton in Independent Spirits: Women Painters of the American West, 1890–1945.

Central to the cousin's endeavor was the Model T Ford, it was Susie's father, Jim Smith, who taught her to repair cars, drive tractors, and to plunge fearlessly into the wilderness. 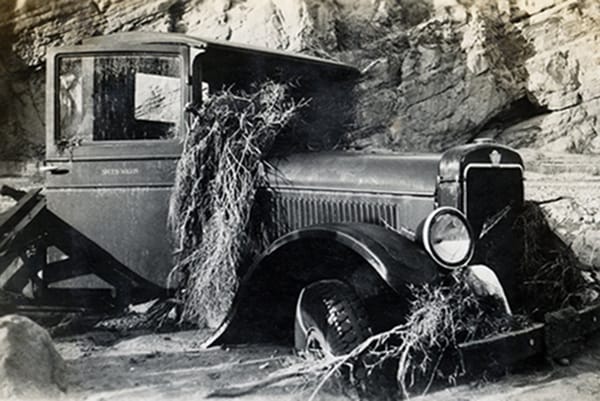 After the Storm, Box Canyon, 1929 (all photographed by Graves) 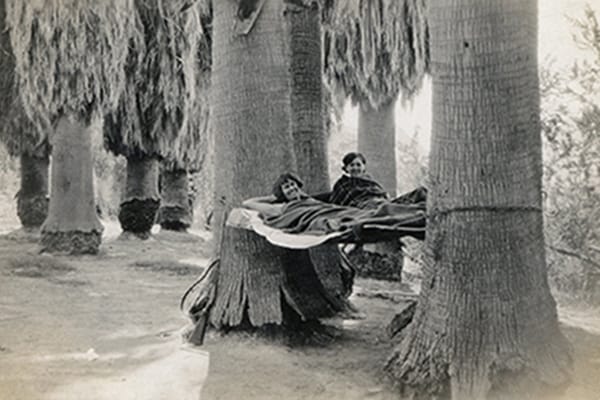 Susie and Lula Lounge in Hammock at Corn Springs, 1930.

Susie and Lula’s kingdom was fringed by the Orocopia, Chocolate, and Eagle mountains. Bordered by the Salton Sea to the west and the Colorado River to the east, it’s a big swath of nothing, generally passed over by travelers and explorers.

There are no major peaks, no geysers, and no grizzly bears to attract hoteliers and tourists. Even today, it’s a place you travel through, not a place you linger. A modern-day motorcyclist called it, “Your basic 100-mile blast in a region where your helmet is often the tallest object on the horizon.”

But the region was not devoid of activity. These were the years of the epic construction projects and huge public works extravaganzas — the All-American Canal, the Colorado River Aqueduct — that brought thousands of men to the California desert. The projects had an aura of spectacle about them, like a World’s Fair or a space launch. Susie and Lula’s insider access to the massive works was heady and also historic.

“It amazes me how the superintendents of the camps from JF Shea Co. east about 50 miles to Utah Construction Co. let me go into the heading of the tunnels while the work was going on,” Susie wrote.

Susie and Lula were as focused as any WPA photographers on assignment, intent on recording the people, the time, and place — as if they knew very well the time of burro-packers and aqueduct muckers and blasters was soon to end. 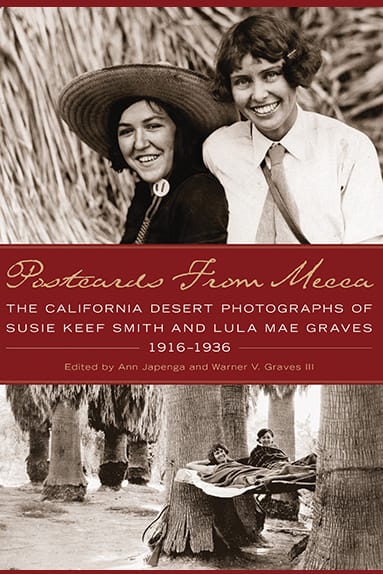 Postcards from Mecca:
The California Desert Photographs of Susie Keef Smith and Lula Mae Graves will be on display with landscape paintings by Lula’s grandson, artist Warner Graves, Jan. 15–May 11 at La Quinta Museum. postcardsfrommecca.com