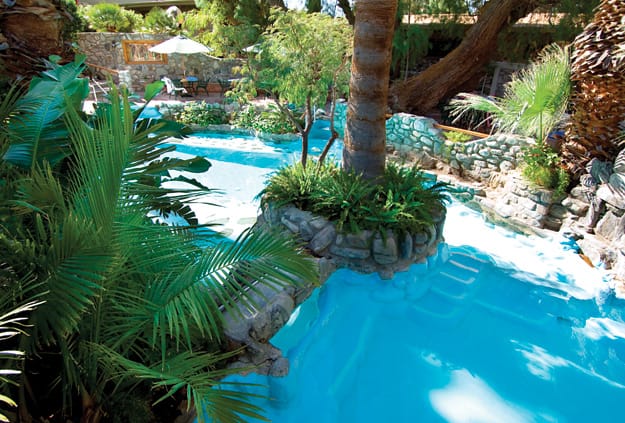 Homesteader Cabot Yerxa discovered the healing hot mineral waters at the foot of the San Bernardino Mountains in 1913. Almost 100 years later, “California’s Spa City” attracts visitors from far and wide. Naturally heated underground to as much as 180 degrees, the healing waters have resulted in more than two dozen spas and spa hotels, including the celebrity-studded Two Bunch Palms Resort & Spa (1) , Miracle Springs Resort (2) , and El Morocco Inn (3) . Even the tap water is award-winning. Tips & Fun Facts
■    Pioneer Cabot Yerxa worked on his residence, now Cabot’s Pueblo Museum , until his death in 1965. Today, daily tours are offered of the hand-crafted home. www.cabotsmuseum.org
■    The San Andreas Fault separates the city (which is on the North American Plate) from other valley cities, which are on the Pacific Plate.
■    The famous Two Bunch Palms Resort & Spa appeared in the 1992 movie The Player.
■    Spas listed on Tripadvisor’s list of top 10 Best Hidden Gems include El Morocco Inn & Spa, Living Waters Spa, and Sagewater Spa.