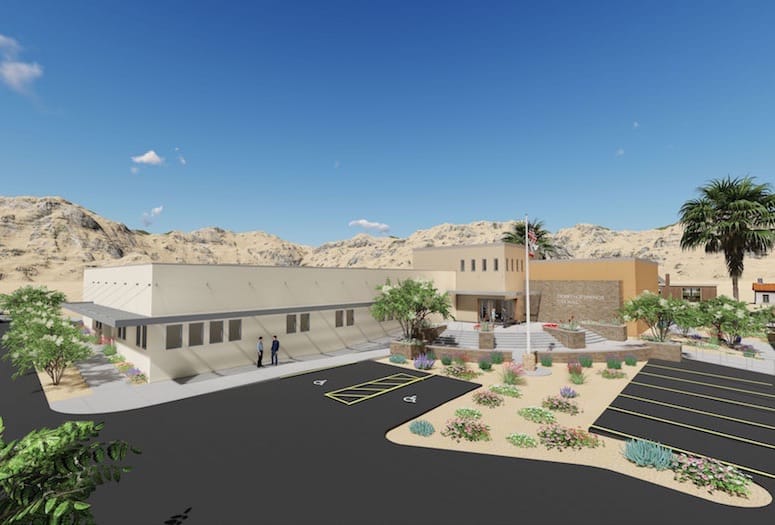 A New Face on Public Space

This past spring, the city broke ground on a much-anticipated new City Hall. It will stand behind the existing City Hall, which has been a collection of construction trailers for far too long. “We’re going to build a City Hall residents can be proud of,” said Mayor Scott Matas. More than a comfortable workspace for municipal employees, the modern 13,000-square-foot structure will serve as a welcoming place for all who come to conduct business with the City.

Desert Hot Springs will also soon gain the resources of a brand-new library, one more suited to a growing community. The 15,000-square-foot facility is slated for the corner of Palm Drive and Park Lane, and once complete, it will more than quadruple the size of the current library on West Drive. This development goes hand in hand with other upgrades soon to be or already in place around the City, including Palm Drive’s stately new entry point. Generally considered a gateway into the City, this major thoroughfare has benefitted from the addition of crisp signage, illuminated medians, and rows of towering palm trees.

With elevated views of the Coachella Valley and quick access to multiple desert cities, Desert Hot Springs is a sought-after bedroom community. Of course, a bedroom community needs homes, and although the recession of a decade ago squashed new construction for a time, things are looking up. Skyborne, a partially finished housing development three miles west of downtown, is set to resume construction. Other projects in the works include Marbella Villas, a 25-acre, 402-condominium complex; Rolling Hills by Watermarke Homes, which consists of 16 single-family homes; and Tuscan Hills, an ambitious planned development of 1,800 homes by the Walton Group.

Following a fruitful trip by City staff members to the International Council of Shopping Centers conference this past spring, many sizable national retailers are in talks to put down roots in Desert Hot Springs. As one of the only cities in the region to have received designation for Qualified Opportunity Zones, Desert Hot Springs can deliver major tax benefits to investors. Designed to spark economic growth, Opportunity Zones have been nominated for special tax treatment by the state and certified by the Secretary of the U.S. Treasury. 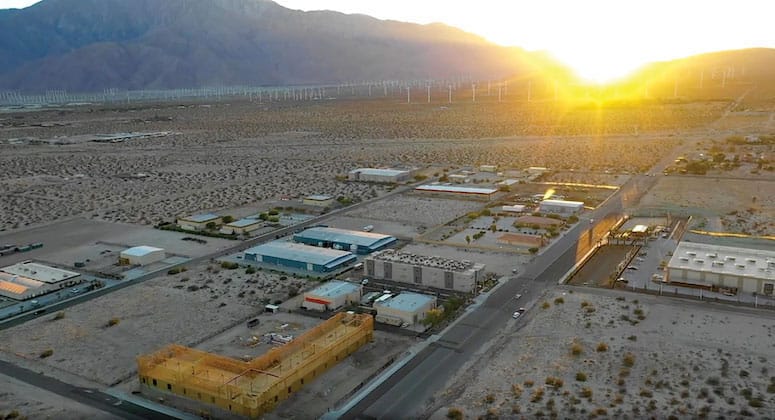 The site of the cannabis industry’s first ever commerical-scale solar project Canndescent.

The impetus for many of the upgrades and renewed commitment to development currently being witnessed around the community come courtesy of its thriving cannabis industry. As the first city in Southern California to permit legal cultivation, Desert Hot Springs has shown itself to be a leader in the permitting and facilitating of large-scale cannabis enterprises. Seized by the same spirit of innovation that inspired the town’s early settlers, entrepreneurs continue to work in tandem with land use planners, law enforcement officials, and city project managers to build a dynamic trade.

Desert Hot Springs recently became the site of the cannabis industry’s first ever commercial-scale solar project. Canndescent™, a trailblazing company based out of Santa Barbara, now powers its indoor production facility in Desert Hot Springs solely with renewable solar energy. Canndescent™ has, in effect, created a more sustainable growing model and provided a critical template in an industry known to tax water and electricity resources. The solar project in Desert Hot Springs currently produces enough power to charge an estimated 20 percent of U.S. smartphones for a day. By welcoming such innovation, the City once again leads the way, demonstrating how it is possible to divorce cannabis cultivation from many of its negative environmental impacts.

Year-round guests are drawn to its natural beauty, wealth of hiking trails, and other offerings. 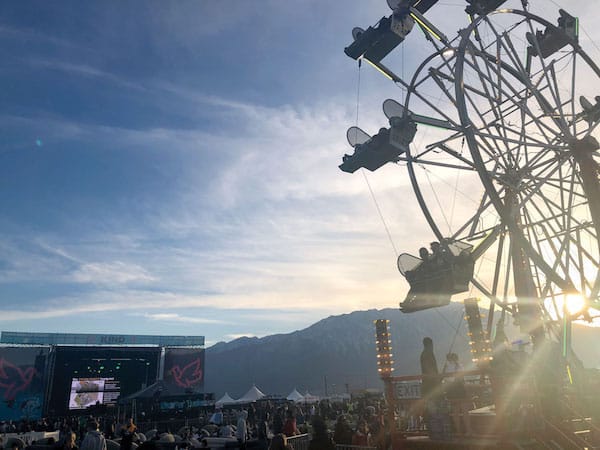 Thousands turned out for the inaugural Kind Music Festival in February at the future site of Tyson Ranch Resort in Desert Hot Springs. The one-day cannabis-friendly festival was such a resounding success that it is set to return for another round. This time, it is projected to expand to three days on the same patch of desert that boxing legend Mike Tyson plans to incorporate into a 412-acre resort and cannabis research facility.

Music weaves seamlessly into the fabric of Desert Hot Springs. It springs from innovation and pioneering spirit in much the same way the more than three-dozen revitalizing mineral spas gracing the landscape around town do. The community is renowned for these retreats, which are all fed by one of the world’s finest natural hot water aquifers. But they wouldn’t have been possible without the efforts of Cabot Yerxa and other early settlers like him.

Things are happening in Desert Hot Springs. Entrepreneurs and investors are recognizing its unmatched economic opportunity. Year-round guests are drawn to its natural beauty, wealth of hiking trails, and other appealing offerings. Permanent residents remain fiercely loyal to their community and proud of all the positive changes afoot. “The definition of potential is having or showing the capacity to become or develop into something in the future,” Mayor Matas said. “Desert Hot Springs has gone way past potential. There’s no need for that word to be used anymore. We are making things happen here in Desert Hot Springs. We are making a future for our community.”