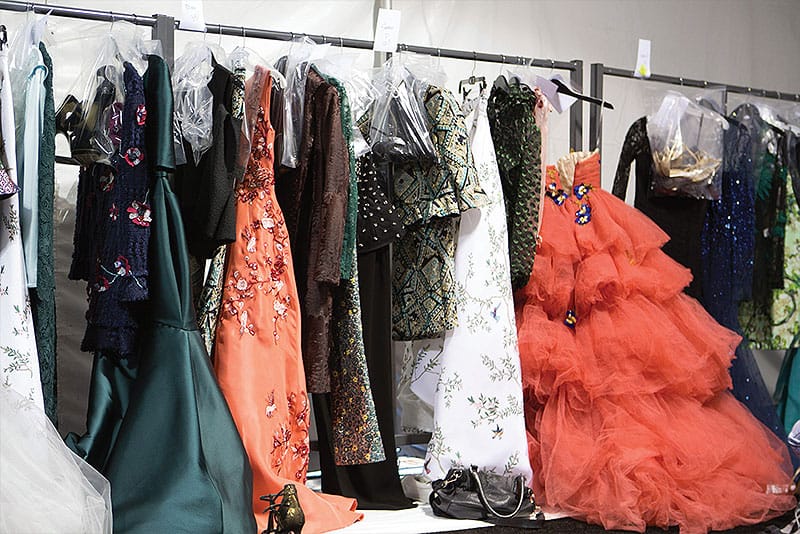 The 11th annual Saxony Group Fashion Week El Paseo is not only the “see and be seen” social occasion for the all-ages fashion conscious of the Coachella Valley; there’s also some great stuff. It’s the best weeklong party of the season.

Girls’ Night Out: stilettos, winged black eyeliner, and supershort dress edition? Check. Dudes Night Out in bright Mr. Turk shirts and matching (what my friend appropriately calls) printed “distraction” pants? Check. A chance to mingle with eccentric locals wearing impossibly high, glittery platforms and a skirt made of — literally — pounds of blue tulle (disproving conventional thinking that locals between 30 and 55 spend all their time in yoga pants and tank tops). Check. Or, as one young, Russian-accented woman told me at the bar during the El Paseo Rocks show, which reflected the more relaxed, slightly less daring aesthetic of the average CV woman (think the flowing lines of Eileen Fisher’s designs, as well as the palazzo pant, a difficult style with mysterious staying power), “fashion is for all of us, no matter who we are.” She adjusted the front of her cleavage-boasting dress, drained her glass of cheap white wine, and immediately ordered another.

The roof at The Gardens on El Paseo was the ideal central location for the event, and just a Jimmy Choo’s throw away from Saks Fifth Avenue, another major FW sponsor. The nightly preshow cocktail crowd was lively and diverse, making vibrant, sweaty space for desert cities residents to strut their self-curated stuff to thumping dance music before the couture stuff was paraded under the perfectly cooled white tent, where not even the models broke a sweat under the runway lights. Friendly, task-oriented volunteers in pink and black Fashion Week T-shirts directed the lucky few to the VIP lounge, where under the ballroom lights and sparkling white decor, you could add a bit of glamour to your face by trying a pair of eyelash extensions while sipping a perfectly proportioned martini. 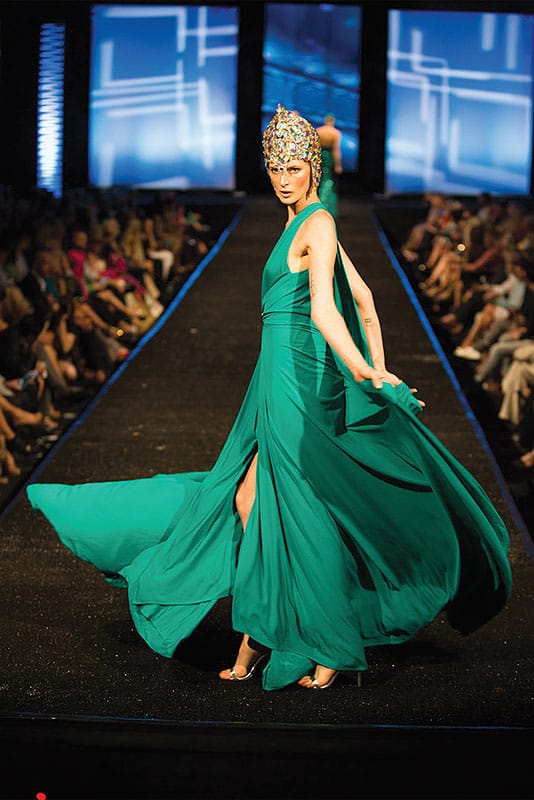 Susan Stein, the brains and style behind Fashion Week El Paseo’s organization and creativity, felt all the shows were “right on,” from the night of diamonds showcasing local jewelers; to Marc Bouwer’s glamorous final act (“very red carpet,” according to Stein); to the community-driven El Paseo Rocks show, which presented the earnest and energetic singers and dancers from the Musical Theatre University in Rancho Mirage, including a stunning soloist who, after graduation, is headed straight to Broadway.

Fashion Week began 11 years ago with only one designer — Kevan Hall — and has developed to include eight diverse shows that illustrate the evolution in the concept, execution, diversity, and reach of the event. “We’ve come so far in 11 years,” Stein says. Bloody well right. Stein gushed about this year’s “perfect mix of designers,” including the ultrafeminine and wonderfully decadent designs of Monique Lhuillier, a big “get” for this year’s lineup; the Project Runway stars (so far, Fashion Week El Paseo has hosted 40 of the 100 designers from the popular reality TV show); and especially the debut designers from the Fashion Institute of Design and Merchandising. Duston Jasso, in particular, was a crowd favorite with his stunning, pearl-covered gowns and remarkable architectural shapes that made even the divas in the front row gasp.

The week was also full of color, literally and metaphorically. “Le Chien” dog fashion show, featuring the critter version of 1980s glam and glitz, was hugely popular, as always. Dame Zandra Rhodes, an international designer based in the U.K. brought the bright colors that appeal to fashionable women of the desert, reflecting a larger industry trend, according to Stein; namely, that “color is back.” Other trends included all-black (Michael Costello’s gowns), as well as the use of sheer or transparent material, which was a part of nearly every show. Sometimes this material was strategically placed … sometimes not so much. 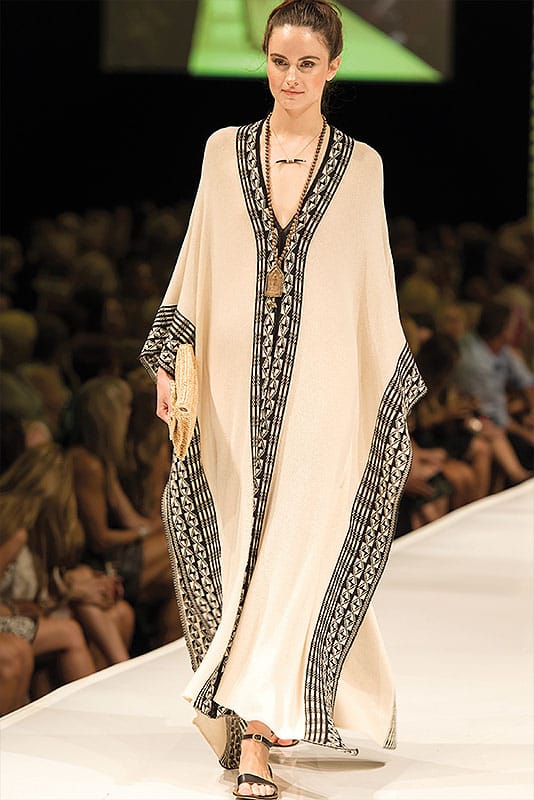 With the exception of some structurally complicated ball gowns, many of these wholly original designs were wearable. This trend, Stein noted, was an increasingly important component of the fashion industry. People want to acquire what they see, and they don’t want to wait six months, which is why trunk shows have become an industry staple. Why rent the runway when you can own a piece of it? Objects carry history and context. Stein herself offered the perfect example: The many different bracelets stacked on each of her arms, from wrist to elbow, were collected on trips around the world, each linked to a memory or a moment. These are the unique stories that only objects — especially fashion — can tell.

Thanks to Stein’s leadership and the dedication of her team, Fashion Week El Paseo has become a trendsetter, hosting the first trunk show 10 years ago, before such events were common in the industry. Trunk shows enable designers to deliver on-the-spot wearable fashion: Send them home with empty trunks and a stack of Benjamins. Instead of farm-to-table, it’s runway-to-wearer, which, Stein observes, is part of the zeitgeist of “Everybody wants everything now,” she says. For weeks I’ve been swapping out my usual leggings/tank top for my Anthony Ryan dress, responding to compliments with “I got it at the Fashion Week trunk show,” and feeling like an insider.

This year’s event — featuring Project Runway designers — was, according to Stein, a “love fest,” and a major highlight of the week. In an industry where competition is notoriously fierce, the friendships made at this event were slightly surprising but welcome. Listen up, New York Fashion Week: The love fest is the new cat fight.Monique Lhuillier’s Byzantine style beading and tailoring combined to create works of art.
Photo by Tiffany Clark 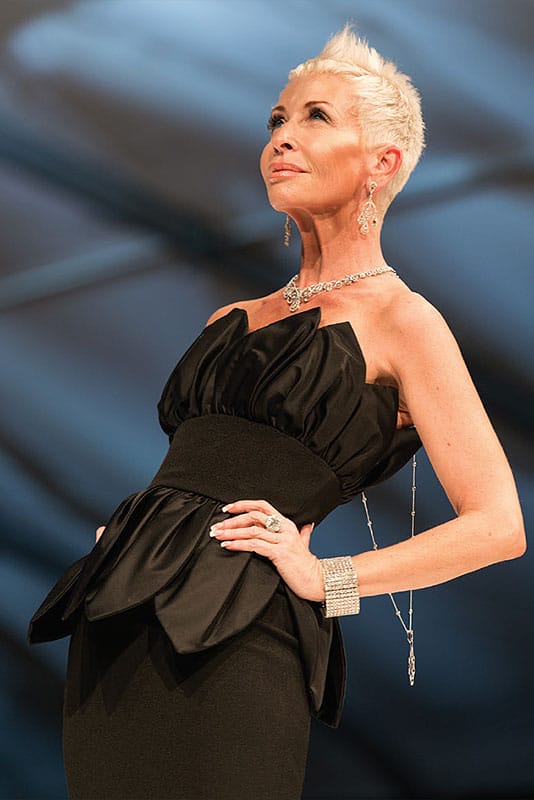 El Paseo Jewelers proved once again that diamonds are a girl’s best friend … at any age.
Photo by Tiffany Clark 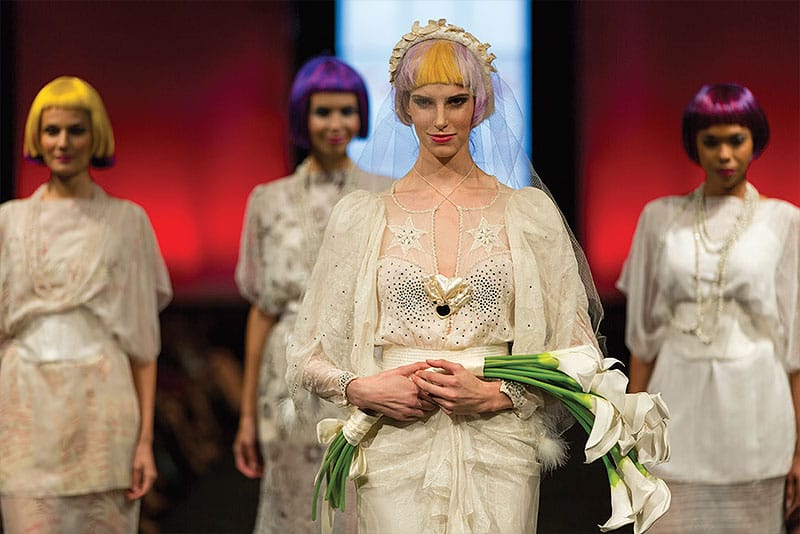 Zandra Rhodes’ other worldly beauties were led by an ethereal bride to close a show of fanciful fashion.
Photo by Greg Peterson 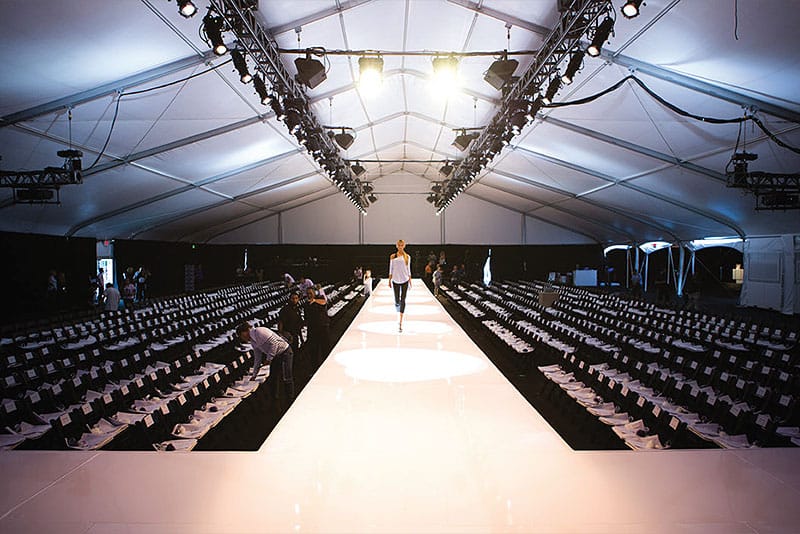 A lone model practices her strut on the long empty runway in the big white fashion tent.
Photo by Dre Naylor 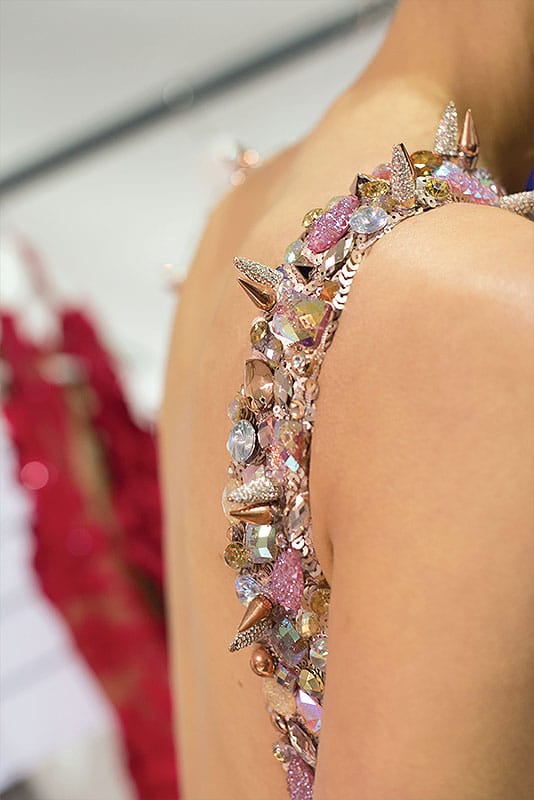 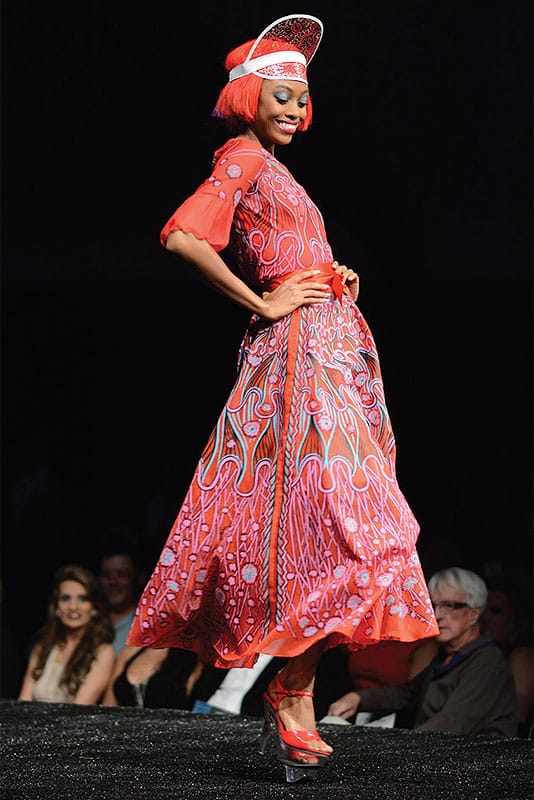 Zandra Rhodes’ model flipped her lid and flashed her smile in a provocative ensemble of pink and red.
Photo by Ariana Bindman 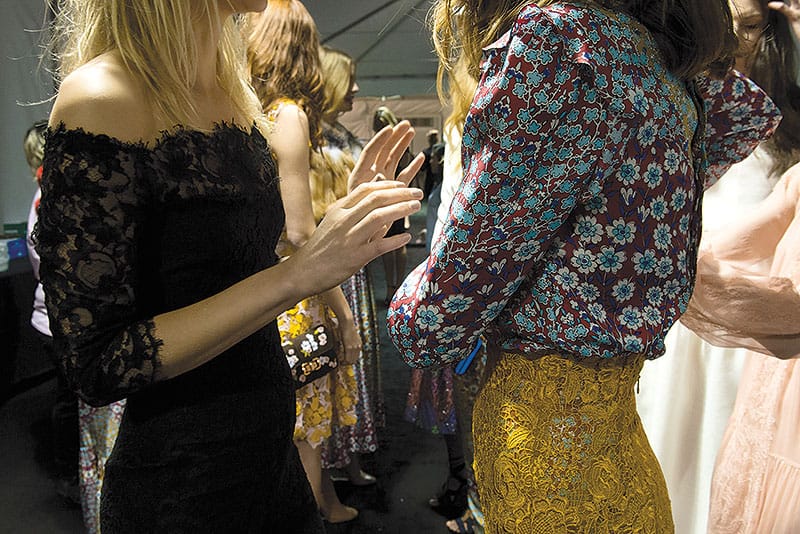 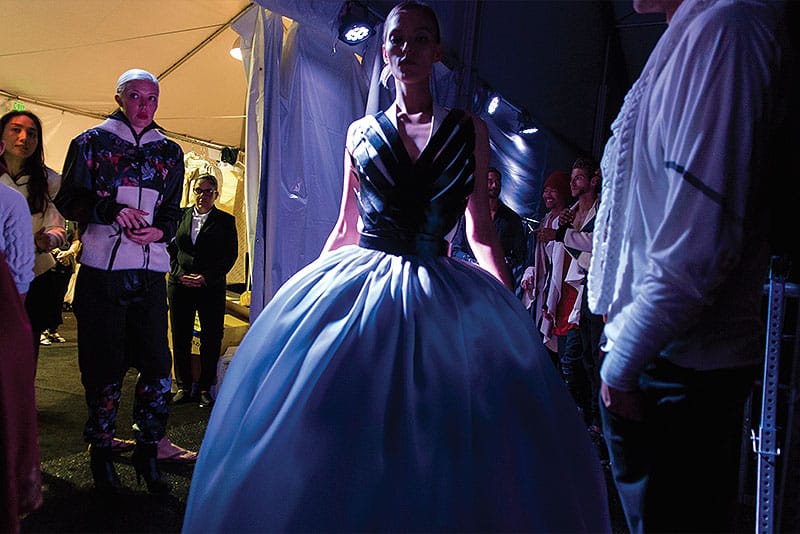 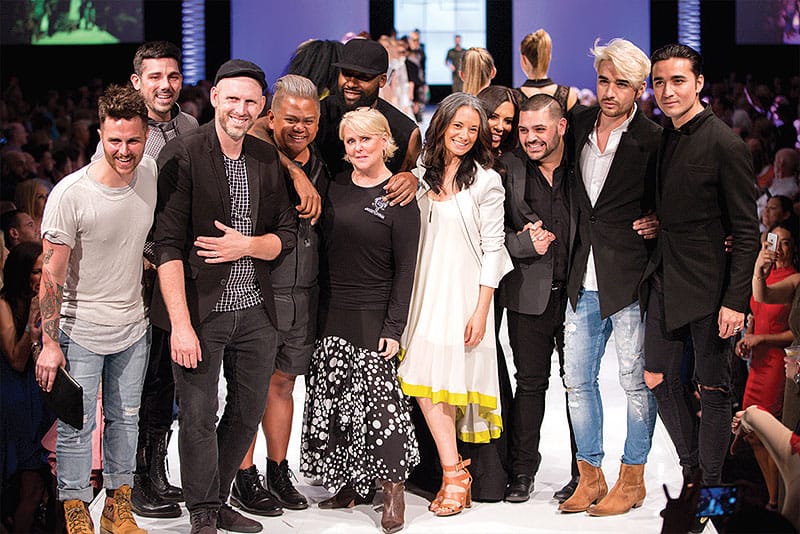 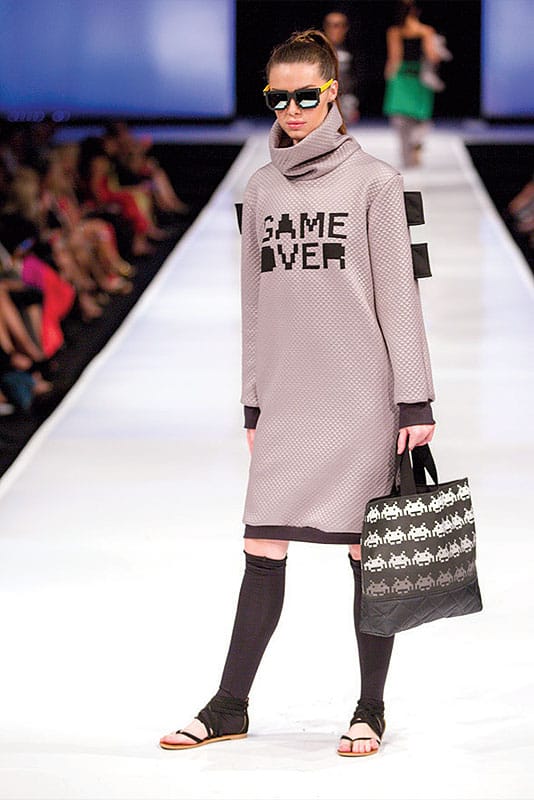 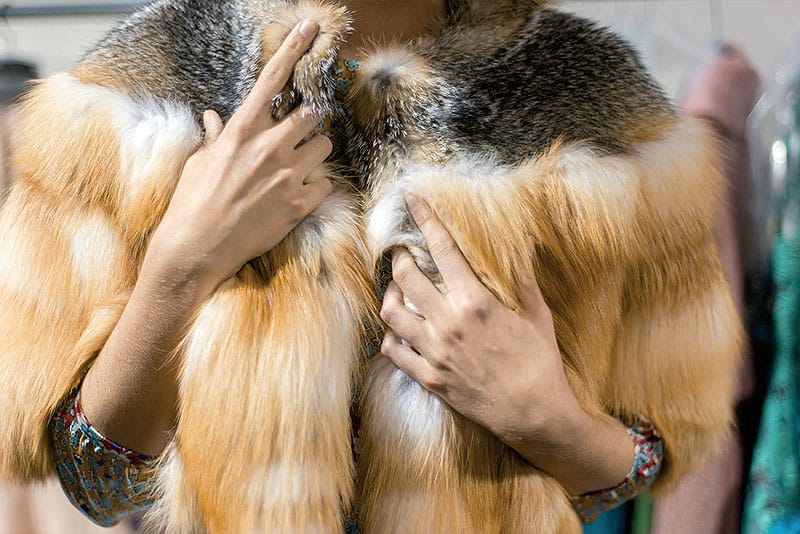 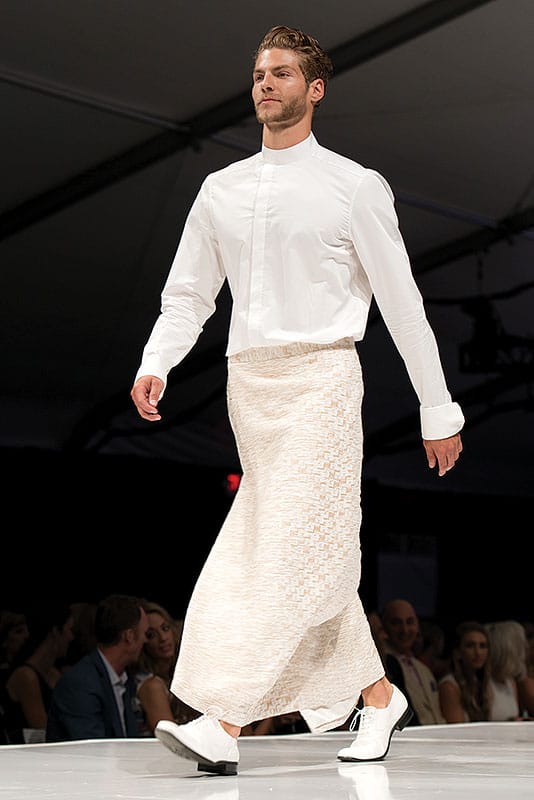 Sarongs as they might be worn in Luke Skywalker’s village, interpreted by FIDM’s Tomy Huang.
Photo by Tiffany Clark 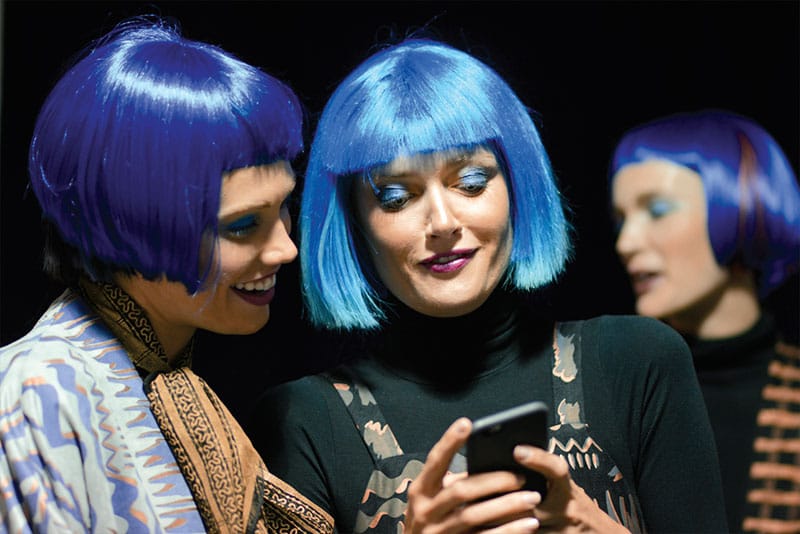 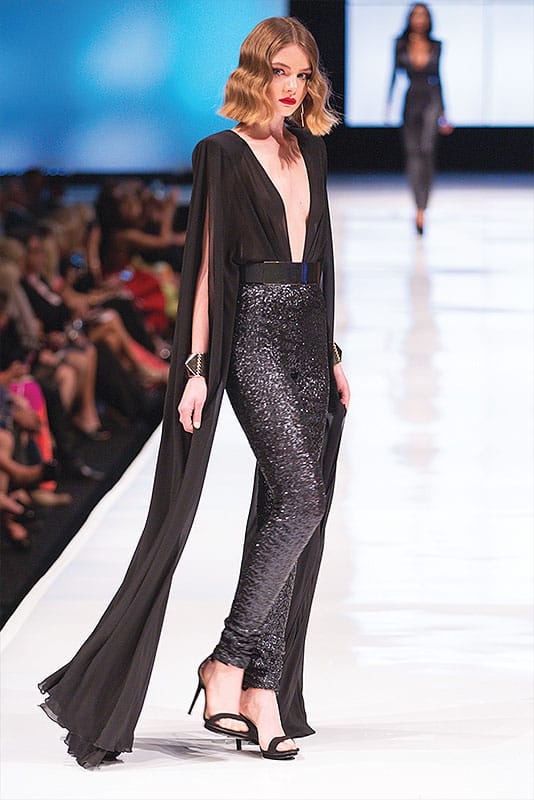 Michael Costello Couture was all about attitude and allure.
Photo by Greg Peterson 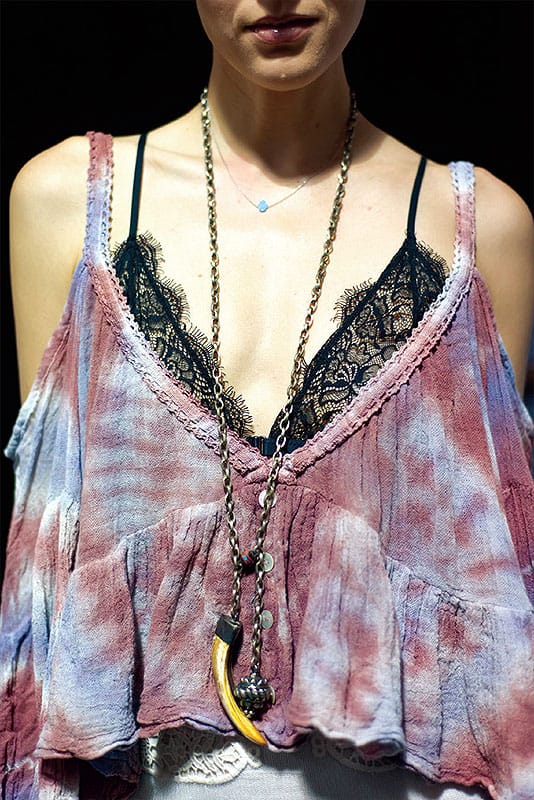 Layers of boho chic from Blonde on El Paseo.
Photo by Tiffany Clark