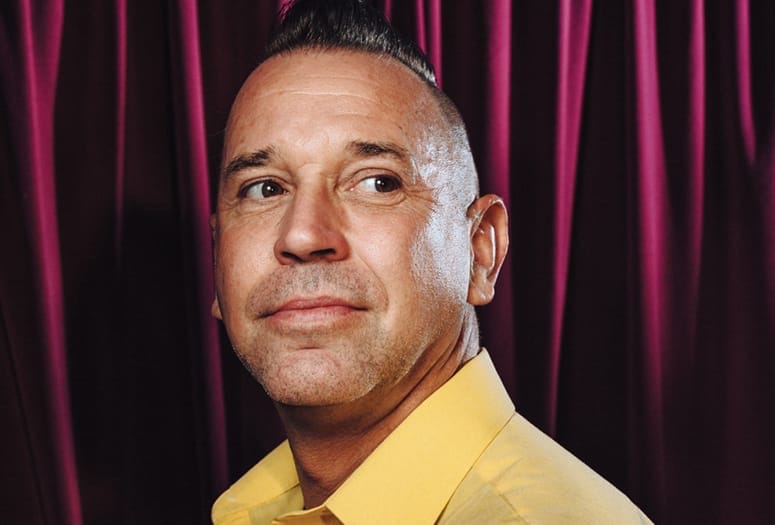 Producer-director Robbie Wayne wants The Desert Rose Playhouse in Rancho Mirage to transport audiences to “another world” with great experiences on and off the stage.
PHOTOGRAPH BY NATE ABBOTT

Paul Taylor and Jim Strait openedThe Desert Rose Playhouse in Rancho Mirage in 2012 with Tom Orr’s Broadway parody Dirty Little Showtunes! Intended as short run, it drew theatergoers for almost six months. Over the next six years, the nonprofit organization mounted premieres of new or lesser-known LGBTQ-themed works as well as landmark shows like The Boys in the Band; Love! Valour! Compassion!; and Angels in America, Part One, Millennium Approaches.

In 2014, Palm Springs Pride named the company, which donates tickets to Desert AIDS Project clients, Organization of the Year. Two years later, the playhouse raised more than $7,000 for the victims of the Pulse Nightclub shooting in Orlando.

This past summer, Taylor and Strait retired and passed the baton to Robbie Wayne, a triple-threat performer who has appeared in a number of shows there and in the community. Wayne, a North Carolina native, spoke to Palm Springs Life Arts + Culture about his plans for the playhouse, his first season as producing artistic director, and the importance of providing an outlet where people can perform.

“I have a particular vision of how i want to present theater. and i’ve been given that opportunity, so i’m going to take it and do it.”

Why is community theater important?
I have met so many people whose lives have literally been saved by having an outlet for creativity. I know people who’ve gotten off of drugs by being able to get on the stage. If you’re a performer at heart — whether you’re a housewife or a Lyft driver — if you have that drive to perform, it’ll eat away at you until you do something about it. And I think community theater is the cure-all for that.

What distinguishes The Desert Rose Playhouse?
We are the only LGBTQ theater in the Coachella Valley. We produce only gay-positive productions that portray the community in a positive light — or at the very least, show the struggles that come with being on this side of the fence. The Desert Rose Playhouse embraces all of the diversities within our own diverse community. That sets us apart to a degree.

So do your shows. You often produce offbeat works.
Yes, we try to do things that are more obscure, including world premieres. Junk was a world premiere, Dare was a world premiere. There have been several others we’ve done in the past. There are enough venues in the valley that fill the need for larger, more mainstream shows. We are a smaller venue. We’re more of a black box–type theater.

With founders Paul Taylor and Jim Strait retired, what are your plans for the theater?
Jim and Paul created a solid theater that people love. I want to expand community outreach. I want to open up the stage to local playwrights — if you have a script and you really believe in it, and you want someone to see it, we will look at it. And if it fits with our programming and our mission and our schedule, maybe we can put it on for a weekend. So, I’m looking at submissions.
Sounds more like a community service.

As a nonprofit, we rely a lot on support from the community. And the more supported we are, the more we can turn around and give back to the community.

Can you give us a preview of this season?
For December we have Christmas With the Crawfords. It’s right in line with the other programming that has been successful here — it’s campy and fun. Joan Crawford is doing her Christmas interview, and celebrities keep showing up at her door, mistaking her house for the one next door, which is hosting a huge party to which Joan was not invited. And as you can imagine, chaos ensues. After that is Looped, starring Judith Chapman. It’s based on a real event that took place in the summer of 1965 when Tallulah Bankhead was called back into the sound studio to rerecord a line of dialogue for what turned out to be her final film [Die! Die! My Darling!]. It was literally one sentence, but she showed up inebriated and it took eight hours to get the line.

What other changes can we expect at The Desert Rose?
We’re changing everything in the theater. When you walk in, I want you to be able to forget everything outside that door. You can’t be still thinking about the speeding ticket you got last week or your sick kid who had strep throat over the weekend. I want people to walk in and be transported to another world. I want to put a baby grand piano out front. And we’re going to have monitors with different types of entertainment and music and different things going on in the lobby, including cocktails provided by Street Bar for many of our events. I have a particular vision of how I want to present theater. And I’ve been given that opportunity, so I’m going to take it and do it.