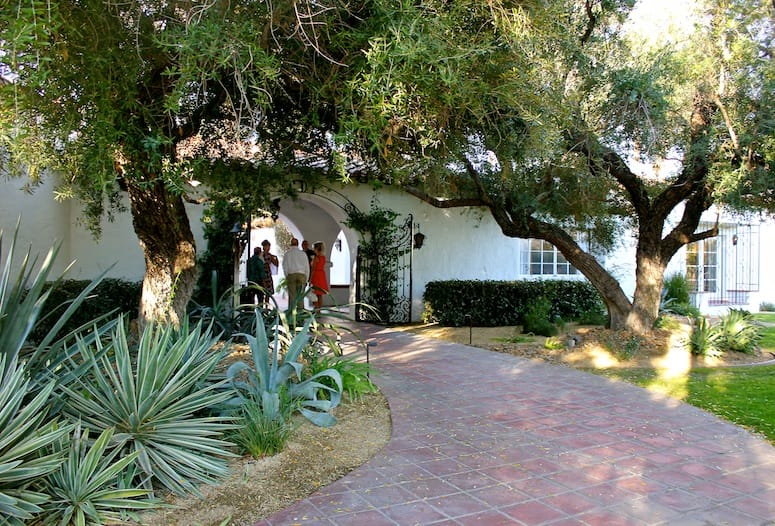 Palm Springs has enjoyed a long, rich history with Spanish architecture with its defining courtyards, cathedral ceilings, and ornamental ironwork.

The Charles Farrell house, which has been beautifully restored to its 1934 roots in the historic Movie Colony neighborhood in Palm Springs, was originally built for Alexander Henry.

At the time, the property consisted of a main house and a guesthouse. Later, in 1952 when the Farrell’s took possession of the property, they commissioned an addition by the architectural firm of Clark & Frey; and a wrought iron arch was built above the entry bearing Farrell’s initials.

Farrell, a silent movie star, went on to become mayor of Palm Springs.

Over the years, the home has changed many hands, and has fallen into disrepair, until it’s current owners began extensive renovations to the property.

Fortunately, the current homeowners had the original Willard photos of the property, (Stephen Willard, 1894-1965, one the area’s most important early photographers).

As a result, they had the opportunity to do a first-rate restoration in matching the past with the present look of today. A recent garden party hosted by the Palm Springs Preservation Foundation allowed visitors to see the finished product. Palm Springs Rentals is making the property available as a rental, but no further plans are in place to show the home again by tour.

Most people associate Palm Springs with midcentury architecture, but there is an earlier history that goes back to the 1920s and 30s known as the “Glory Era of Palm Springs Architecture.”

Spanish architecture reached its apex in Palm Springs during the 1920s, and by 1925 had become a craze, particularly because of the influx of Hollywood celebrities.

VIDEO: Take a tour of the Charles Farrell Residence, recently restored to its 1934 vintage.