Desert X launches with 18 installations, sculpture to virtual reality, presenting a contemplative view on life in a fragile environment.

In the east end of the Coachella Valley, boutique hotels and country clubs give way to truck stops and agriculture. This is Cesar Chavez country, where migrant farmworkers had to fight for better pay and decent working conditions.

On Interstate 10, Dillon Road is the last exit for awhile. Overshoot and it's a solid 20 minutes to the next stop. Drive north on Dillon's rugged blacktop, following trucks headed to the landfill, then turn right and pass through the remnants of a gate. The last mile is dirt, rocks, and ruts, with citrus on one side and cholla on the other. Go beyond where you think you should, until a water tower appears to rise up from a vineyard. Its buff-colored sides once blended quietly into the sand. Now four enigmatic figures stretch from ground to sky, guarded by a snarling blue canine, a rust-colored rattlesnake, and a genie.

You’ve reached Armando Lerma’s Visit Us in the Shape of Clouds. 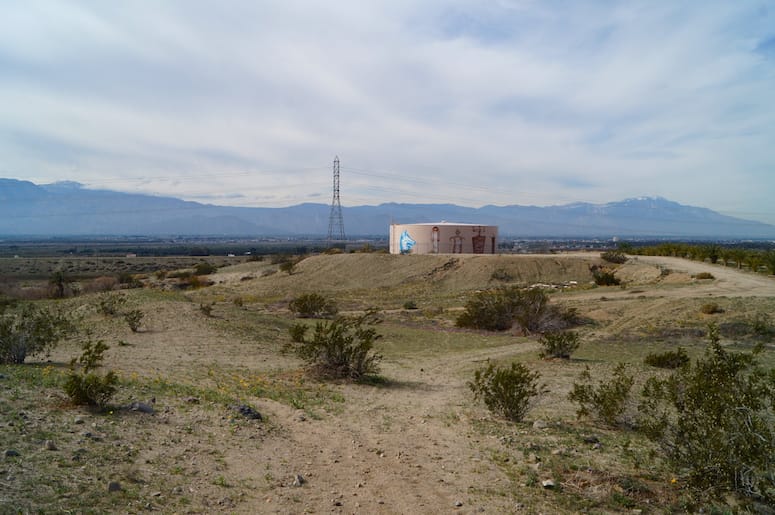 Lerma, who grew up in Coachella, is the only local artist selected for this year’s Desert X, the biennial exhibition of site-specific art sprawling from Snow Creek to the Salton Sea and beyond. He participated in 2017, the inaugural year, when he created a mural, La Fiesta en el Desierto, on the side of a piñata store.

Visit Us in the Shape of Clouds will be his biggest mural, sending animals, plants, seashells, and what he calls “ancestral spirits” more than 30 feet high.

Standing on a hill near the water tower, Lerma can see his grandfather’s ranch, where his family still resides. It’s one of the few green squares in a dun landscape. In the valley, money and rain flow west to east. Both are sparse by this point. The land would seem devoid of life, were it not for wildflowers and Lerma’s sentinel, a contemporary pictograph signaling human presence.

You can obtain a map showing locations of the 18 installations at these stops.

The artist says he was thinking about migratory patterns of animals and people, mixed with the transitory nature of the desert, how things move and fade. He wanted to create “a dreamy wisp of an idea — like a memory, but on a really long time span.”

Over in Palm Desert, at the base of the mountains surrounding Homme-Adams Park, three Danish artists also interpret the region’s evolution in geologic terms. The collaborative Superflex, consisting of Jakob Fenger, Rasmus Nielsen, and Bjørnstjerne Christiansen, built a massive vertical form clad in pink aluminum foam, a cuvée of references to modernist architecture; Sunnylands, the former estate of Walter and Leonore Annenberg in nearby Rancho Mirage; and coral reefs.

The title of the piece, Dive-In, pertains to drive-in theaters, an endangered species in themselves. On Saturday nights only (6-8 p.m.), the sculpture becomes the backdrop for projected images of fish interacting with a small version of the structure, alluding to 6 million years ago when the valley was underwater, and foreshadowing rising sea levels due to global warming.

Artistic Director Neville Wakefield says that Desert X is an artist-driven show, with the landscape shaping the themes. In 2017, a few of the most notable pieces reflected the sheer beauty of the desert — literally — their mirrored surfaces creating an infinite loop of place and witness. The juggernaut was Doug Aitken’s Mirage, the silver house that launched more than a thousand selfies.

This year’s exhibition asks whether nature can withstand development, even as the show generates cultural tourism that feeds the valley’s economy. “People would go to Mirage, get the image and that would be it,” Wakefield says. “I’m interested in how art can slow down experience, rather than how it speeds it up. We tried to avoid having a single work that magnetizes attention in that way.”

That magnetizing effect — tens of thousands of Instagram influencers, the people that art biennials would kill to have — led La Quinta’s city leaders to get cold feet about Jenny Holzer’s piece, Before I Became Afraid, citing traffic concerns. The artwork would have projected messages about gun violence onto the mountainsides around La Quinta Cove.

It was moved to the pristine Whitewater Preserve, until the Wildlands Conservancy, the group that owns and manages the preserve, canceled the piece less than two weeks before Desert X’s opening to avoid potentially harming pneumonia-weakened bighorn sheep. At press time, organizers were considering alternatives for a later date. 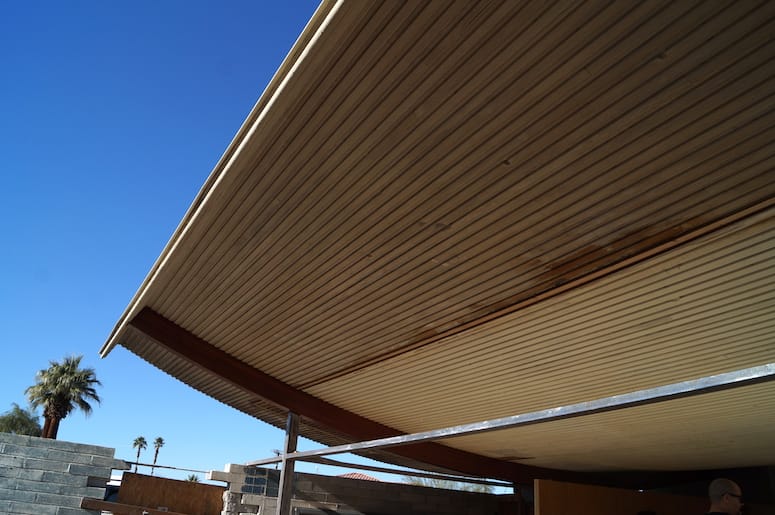 PostCommodity's It Exists in Many Forms uses the Wave House in Palm Desert, currently being renovated.

This is the Desert X conundrum. The desert is enticing, durable, and fragile.

As Wakefield notes, people come here for an experience, seeking something they can’t find in New York or Los Angeles. The desert accommodates these visitors, for the most part. It resists efforts at domestication and can be unforgiving of ignorance. But when severe droughts become routine, the desert looks like the future, and we need to learn how to live in it without destroying it.

Between Feb. 9 and April 21, when Desert X concludes its run, the art press and social media will fill with images of artwork such as John Gerrard’s Western Flag, a digital simulation showing a stream of black smoke. It’s based on the first major oil find, the now-exhausted “Lucas Gusher” in Spindletop, Texas. The simulation changes with the time of day.

Another stop will be Sterling Ruby’s Specter, an incandescent orange monolith, 20 feet of optical illusion dropped into the creosote bushes near Snow Creek, as if space aliens had a taste for Finish Fetish. Specter may be the first piece seen by visitors driving in from Los Angeles, where the artist is based. Unlike his work that overtly conjures vandalism and violence — ceramic forms that look like the aftermath of disembowelment, for example — Specter is indifferent to its aggression on the landscape. It’s a displacement, a warning sign.

While most of the installations are cautionary, not all are dark. Cecilia Bengolea, an Argentinean performance and video artist based in Paris, integrates dance with sculpture. Mosquito Net builds on the quirky history of the Salton Sea, playfully imagining the hybrid forms emerging from that strange ecological soup. One of Cara Romero’s billboard-sized photographs, Winka and the Windmills, captures the freedom of a child running across open sand. Romero, a Chemehuevi tribal citizen based in New Mexico, says the child represents a time-traveling visitor from the Chemehuevi people, “returning to remind us of our deep connections to the land, the stories contained within it, and how we can live in relation to it.”

Next to the Sagewater Spa in Desert Hot Springs, Julian Hoeber plays with concrete breeze blocks and swimming pools, riffing on the holy grail of desert living, when the line between indoor and outdoor disappears, linking it to boundaries of self and identity. Pia Camil’s rebar rainbows speak to current immigration policies — one half is located in Rancho Mirage, its mate in Mexico’s Guadalupe Valley — but the concept is grounded in hope.

Kathleen Ryan’s exquisite ode to mortality, Ghost Palm, is on the grounds of the Two Bunch Palms Resort in Desert Hot Springs. It can be accessed by a short hike from the end of Bubbling Wells Road. Cinthia Marcelle’s video installation, Wormhole, hopscotches across the valley, placing monitors with live video feeds in empty storefronts from Palm Springs to Coachella to Tijuana, building a visual and conceptual web of connections.

Nancy Baker Cahill’s two augmented reality pieces can by viewed by downloading a smartphone app called 4th Wall. In Revolutions, she transforms a windmill farm into a colorful riot of a garden, while Margin of Error deals with the toxicity of the Salton Sea. Wakefield sees these as new forms of land art, breaking with its male-dominated history. 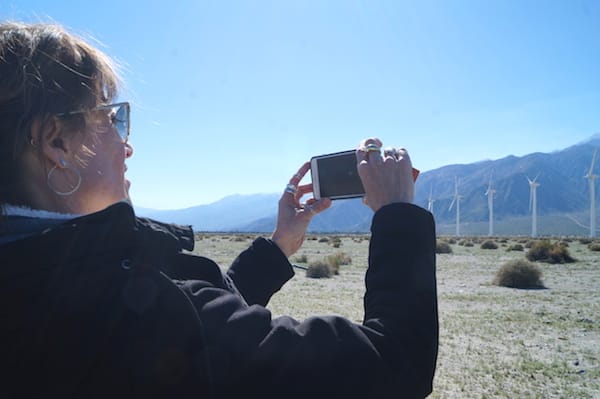 Nancy Baker Cahill shows how to use the 4th Wall app to view her Revolution installation, located on North Palm Canyon Drove near the wind turbines.

Additional artworks are located at Sunnylands Center & Gardens in Rancho Mirage (Iman Issa), in an iconic midcentury modern house in Palm Desert (Postcommodity), inside a former National Guard armory in Indio (Gary Simmons), and at the Salton Sea (Iván Argote, Eric Mack, Steve Badgett and Chris Taylor). Italian artist Norma Jeane’s evasive robot, ShyBot, is being re-released on the Mexican border, while the Desert X website serves as the home for Swedish artist Johannes Heldén and collaborator Håkan Jonson. The team used artificial intelligence to produce fictional plants and animals that become extinct in the future.

Mary Kelly’s work, Peace is the Only Shelter, draws on her years of research into feminist actions against war, in this case the anti-nuclear group Women Strike for Peace (WSP). Formed in 1961, WSP lobbied and demonstrated against nuclear testing in the desert Southwest. Kelly takes over three bus shelters in downtown Palm Springs, painting them bright yellow, replacing advertising with WSP maps, infographics, and the Doomsday Clock timeline, punctuating it all with the international radiation warning symbol. It’s visual pirate radio, a William Gibson-esque culture jamming that might go unnoticed by the art cognoscenti, but perhaps speak to a new generation of activists.

Wakefield offers Kelly’s intervention as an example of Desert X 2019’s deepened sensitivity of place — the understanding that the desert is built from delicate, almost invisible moments as well as grand gestures. He’s happy the exhibition reflects that scale gradient.

“Whether you’re looking at the mountains, and they seem very close when they’re actually far away, or moving from architecture into the wilderness, the experience is one of constantly shifting scale,” Wakefield says. “I think the pieces reflect some of that. I hope they do. It’s important that this doesn’t become just a festival of monumental sculpture.”

Download the DesertX app, or for more information, visit desertx.org.