Design in the Space Age: Modernism Week Exhibition is Out of This World 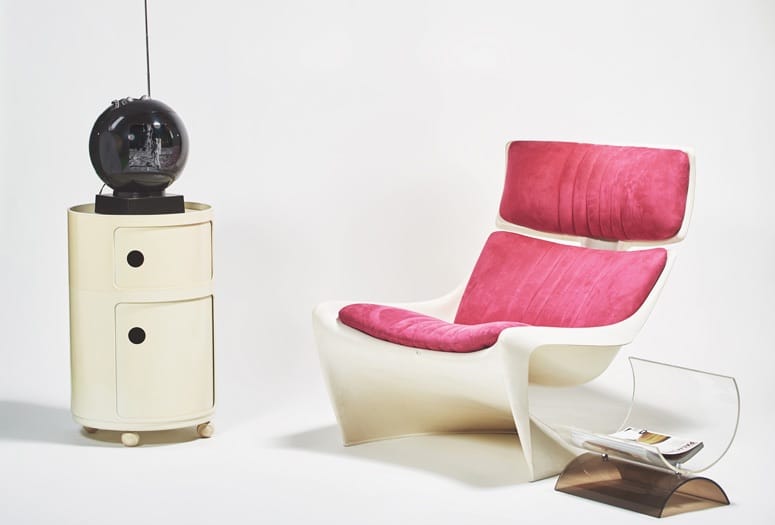 The exhibition organizes rare furnishings and objects into seven displays encapsulating Space Age design from 1957 to 1972.
PHOTOGRAPH BY PETER HEUER

The desert has more than its fair share of sky. More sky means more outer space. And while it’s been 65 years since extraterrestrials handed the blueprints for eternal youth to desert dweller George Van Tassel — telepathically, of course, because that’s how Venusians work — leading to construction of the magically resonant Integratron, the desert abides, waiting for the next contact. The wings of the Bob Hope Estate hover over the south end of the Coachella Valley like an alien Airbnb, and a Buckminster Fuller–inspired geodesic dome punctuates the north side, with William Krisel’s House of Tomorrow in between.

All of which makes Artifacts of the Future: Design in the Space Age, 1957–1972 a perfect fit for Palm Springs and Modernism Week. The exhibition is free to the public and part of a four-day celebration, “The Orbit of Ultramodern,” which includes book signings, plus a free film screening and lecture.

“It’s a Space Age city, not just a midcentury city,” says organizer Martin McGee. “In Palm Springs you had an opportunity for a lot of people to experiment and create, especially architecture that was so far ahead of its time.”

Working from his home base in Buffalo, New York, McGee (who prefers the title “cultural archaeologist” to curator) connected with local preservationists Joy and Courtney Newman, who run the vintage furniture store ModernWay in Palm Springs. With their support, and a donation of floor space from Rosemary Krieger of the Palm Springs Modernism Show & Sale, McGee is staging an exhibition in the lobby of the Palm Springs Convention Center featuring rare objects, many from his personal collection. They represent the peak period in Space Age design, 1957 to 1972, coinciding with the launch of Sputnik, the USSR’s first satellite, and ending with the final U.S.-manned lunar landing. It’s intended as a teaser for a comprehensive museum exhibition that would ride today’s resurgence of interest in space, from Elon Musk’s plans to colonize Mars to the 50th anniversary of Neil Armstrong’s walk on the moon.

“In these times, when there’s so much anxiety and postmodernist malaise, we are excited about the prospects of continuing space exploration,” McGee says. “It’s always been a sense of hopeful optimism, to look to the stars.”

Optimism verges on giddiness in some of the items that will be on display. In the Space Age, anything was possible, and the fantastic became domestic. 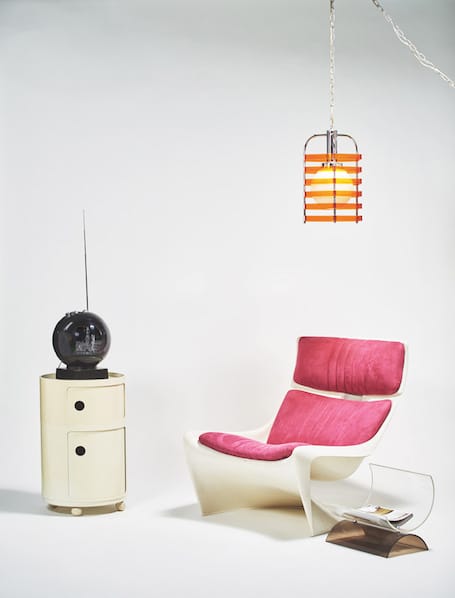 The exhibition organizes rare furnishings and objects into seven displays encapsulating Space Age design from 1957 to 1972.

There’s a sculpture that could have been a trophy for a NASA engineer. Atop a black triangular base dotted with stars, a rocket plume curves upward — ideals of speed and ambition captured in Lucite and chrome. A 1970 Videosphere cathode-ray tube television brought the look of Armstrong’s helmet into the living room. The 1968 lounge chair known as The President, from Danish architect and industrial designer Steen Østergaard, might have graced a high-style home, as it did Captain James T. Kirk’s Bay Area apartment; in 1982, the creators of Star Trek II: The Wrath of Khan used a President chair to convey contemporary luxury in the 23rd century along with Kirk’s love of antiques. One piece of furniture managed to encompass an imagined future that never was, the reality of the time that gave birth to it, and the real “future” in which it continues to exist.

Atemporality might be one of the most appealing and confounding elements of Space Age. All design aspires to be timeless, but these objects are practically multidimensional.

McGee, who has a background in film and media, discovered the power of design in the 1980s when he lived in Tokyo. The Space Age appealed for its nostalgic tug (“I grew up in it,” he says) and conceptual depth. He has organized the exhibition into seven displays — Space, Home, Work, Play, A-V, Trek, and Pop Psyche — setting them in the context of the period’s radical social change.

“At the time of Sputnik and shortly thereafter, there was a tremendous shift in America’s concern with falling behind, a shift toward science and technology on a broad scale,” McGee says. “We can contrast that with the Atomic Age. That was a double-sided sword with its potential for total destruction, also presented as the cure-all for energy needs, with nuclear power.

“The space race was incredibly influential on every aspect of life,” he adds. “It permeated every part of society, from the classrooms and corporate boardroom to department store showrooms and hippie communes.”

“The space race was incredibly

influential on every aspect of life.

It permeated every part of society.”

Artifacts of the Future introduces a concept that McGee calls “3D space” — technological outer space, where science became paramount; psychological inner space, when ideas began to leap from literary speculation to reality, laying the groundwork for the internet; and sociological human space. It was the era of the sexual revolution and avant-garde art, second-wave feminism, and the Stonewall riots. Designers responded, moving from the straight lines of modernism to playful globes in lunar colors of black and white. Cantilevered forms connoted zero gravity, while pop and psychedelic art signified youthful energy and drug-induced exploration in the far reaches of consciousness.

In the 1970s, culture came back to earth. Moon landings were less important than inflation and recession. After Watergate, the Vietnam War, and two gas crises, McGee says, “the future was indeed history.” Perhaps the last vestige was the disco ball, a glittering memory of astrofuturistic promise.

In Palm Springs, though, escapism, utopic visions, and retro-glam are alive and well. “The Orbit of Ultramodern” takes full advantage of the region’s offerings. After the exhibition closes Feb. 18, the event moves to the Rancho Mirage Library and Observatory, which on Feb. 19 screens Marooned (1969), starring Gregory Peck, Gene Hackman, and David Janssen. The film won the Academy Award for special visual effects and was nominated for cinematography and sound. Later that afternoon, McGee will give a talk on Space Age culture and design. Visitors can take free tours of the observatory throughout the day.

“This is tailor-made for extending the midcentury interest into another dimension, no pun intended,” McGee says. “There would be no other place that I think it would make as much sense.”

The exhibition Artifacts of the Future: Design in the Space Age 1957–1972 unfolds Feb. 15–18 at the Palm Springs Convention Center, with more programming Feb. 19 at the Rancho Mirage Library and Observatory.