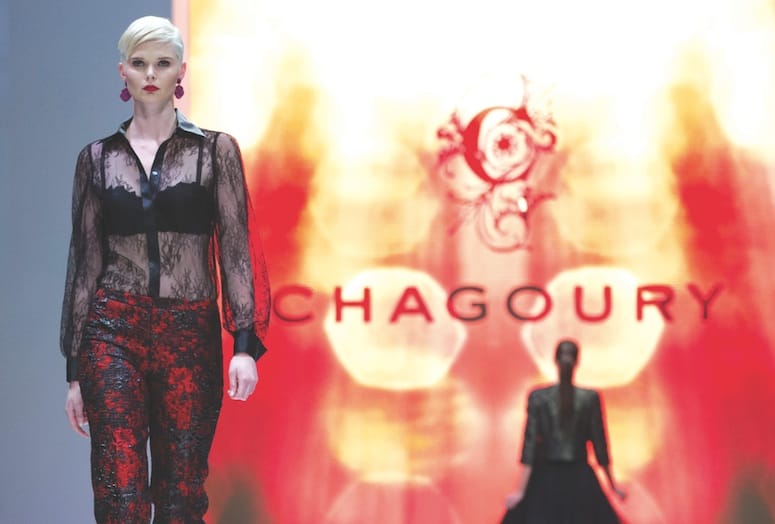 Over the last eight years, Fashion Week El Paseo has hosted more than115 designers and 90 stores.

As we began production for the ninth edition, I began to reminisce about the Designers of the Week who have sent fashions down our runway and remembered the diversity of aesthetics that we’ve seen.

Our very first Designer of the Week, Kevan Hall, showed his stately and feminine couture gowns and fashions inspired by California lifestyle and colors.

Lloyd Klein, our Parisian trained designer, sent out a dramatic black collection in our seventh year that brought back memories of his archival collection that stunned our audience in the second year.

We featured Eduardo Lucero’s goth-inspired fashions (at right) with nude chiffon juxtaposed with black and navy, and Juan Carlos Obando’s Vogue award-nominated looks of intricately fabricated fashions that proved fashion is an art.

Our first female designer, Colleen Quen, brilliantly mixed art and fashion in her gowns, while Katherine Polk for Houghton presented her collection that sent the New York fashion press into a frenzy of positive revues. Her modern fashions were featured at Saks Fifth Avenue and made quite an impression in our desert.

And last year’s Couture designer of the week, Gilbert Chigoury, brought the house to its feet as he ended his compelling and fiery show with a red satin bridal gown.

Previously shown only in Paris and New York for the last 10 years, Zang Toi is bringing his collection to Palm Desert because he knows we represent the best of fashion and is delighted to be part of our event.

His fashions are the epitome of what an elegant woman with style will wear. His love of dance and music are transmitted through his designs. There’s a bit of fantasy involved in his collections that promise to bring an exciting drama to the runway.

And we have six other shows to grace our 100-foot long runway.

As we prep and polish our fashion landing strip for opening night, we look forward to a different designer each night, each with a unique show, and a fashion experience that will make our ninth year the very best ever.

For the week’s line-up, visit www.fashionweekelpaseo.com and see what we have planned for the runways in 2014.