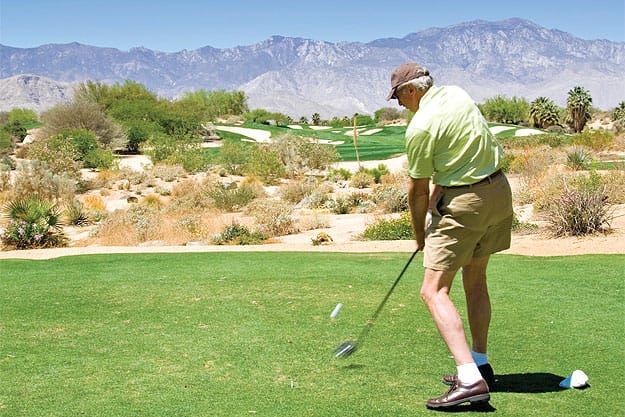 A well-dressed man and woman smile upon arriving at the airport, kayaks rest on a waterfront, dancers in tiger costumes leap through the air, palm trees line a golf green in front of luxury hotels, and a young couple in front of a neon sign beam like they just won a casino jackpot.

These look like images from a visitors’ guide — and they are, but not just any guide. They’re in Las Vegas Health & Wellness Destination Guide, published with the Medical Tourism Association and available through Amazon, Barnes & Noble, and iTunes. In addition to pointing out attractions and hotels, the guide lists medical procedures and treatments available in Las Vegas and the healthcare facilities and providers offering them.

The Coachella Valley could take a page from Las Vegas’ playbook. An introductory page mentions the desert sky and human stars: “Elvis, Manilow, Sinatra” (all of whom have lived in Coachella Valley). And doesn’t this sound apropos?: “Extravagant and out-of-this-world entertainment will always be just one step away. The city is simply taking advantage of its healthy climate, top-notch medical facilities, leading medical professionals and a stunning landscape to forge a path into a new frontier called ‘medical tourism.’”

As in the Nevada desert, tourism in the Coachella Valley has long been a mainstay of the economy. But more and more, people may be booking their first few nights in town in a hospital bed.

“We have patients that come from other countries, especially Canada,” says David Renker, marketing specialist at Eisenhower Medical Center in Rancho Mirage. Sure, some of those patients are snowbirds wintering in the desert, but other Canadians come specifically for medical treatment.

“We do reach out to medical facilitators in Canada,” Renker says. “People need healthcare because they are on long waiting lists up there.” Most often, they seek orthopedic and cardiopulmonary treatment.

Eisenhower hospital personnel have been meeting with healthcare providers in Florida and Arizona that are promoting themselves in the medical tourism arena. “We are trying to build global strategic partnerships to help grow this area,” Renker says. “There is a directory of facilitators. We have just started to branch out into that, but we want to get what we are doing with Canada refined before we go too deep into other countries.”

Betty Ford Center’s website includes features more likely to be found on a visitors bureau or resort website: the outdoor temperature and a list of area hotels.

“The desert is a draw because of the nice weather. Generally it’s beautiful here nine months out of the year, and it’s beautiful other places three months of the year,” says Michela Sands, the center’s corporate director of business development. The Rancho Mirage recovery facility brings in not only patients, but also their loved ones who come to visit and participate in support programs.

“Every week, we have 25 to 40 family members,” Sands says. “They stay in local hotels, eat in local restaurants. They sightsee, time permitting.” Hotels listed on the center’s website offer them discounted rates. About 50 percent of patients are from California, 45 percent from other U.S. states, and 5 percent from other countries.

“Even patients who live locally will have someone visiting from out of town at some point during their stay here,” Sands says. “And every November, we have anniversary weekend [for alumni]. There’s upwards of 1,000 people that come back to the desert for that weekend alone.” The event includes multiple activities that any tourist might enjoy: golf, tennis, hiking, a brunch, and a banquet. The center expects a large turnout this year to mark its 30th anniversary (1,300 came for the 25th anniversary).

Both Renker and Sands say the first question people ask when they call relates to the reputation of the facility and doctors. The second question is about price. But prospective travelers also ask about air service and area attractions. As Renker points out, in addition to family considerations, “You might want to stay for a week after surgery.”

That’s one of the benefits The Medical and Skin Spa at Agua Serena enjoys by being incorporated into the Hyatt Regency Indian Wells Resort & Spa. Following treatment, patients at the medical spa often stay three to six days at the hotel, where they get a special rate.

“What our facility offers is not only a chance to get really good skincare and aesthetic medicine, but also a chance to get away for a bit,” says Dr. Richard Foxx, medical director. Taking Canadian snowbirds out of the equation, a third of his patients come from Orange, Los Angeles, and San Diego counties — taking advantage of the anonymity factor. “They say, ‘I don’t really want to go to the doctor’s office and see my neighbors there,’” Foxx says.

About 10 percent of his patients come from other countries, including England, France, Argentina, Brazil, Italy, and Portugal; others come from small towns throughout the United States. Often they lack access to state-of-the-art laser and injectable treatments where they live. According to Foxx, the most popular treatments for these patients are Botox and wrinkle fillers, which demand a high level of skill.

That all-important skill level — for any medical procedure — is a bonus that the local tourism industry can promote.

“Within the last 10 years, we have seen a shift from people being sent here by a licensed professional,” Sands says. “People are now researching their own medical care online.”