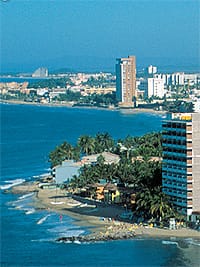 Positioned where the Tropic of Cancer crosses the Pacific coast, Mazatlan marks the northern boundary of the Mexican Riviera that stretches south to Puerto Vallarta. Within this long, peaceful landscape of rock-strewn seas repose some of the world’s best beaches. Few coastlines can rival its natural beauty.

Although the Aztecs never occupied Mazatlan, pirates in the 17th century used its hill-screened harbor to ambush Spanish galleons laden with gold from inland mines. In 1817, the city counted just 21 inhabitants. Mazatlan’s first permanent colony took root in the 1820s when a group of German settlers developed its port facilities to import agricultural equipment. A flourishing international trade soon followed.

Germans also figured in a modern cultural exchange at the turn of the 20th century when a group came from Bavaria to start a brewery. Their “oom-pah” music was quickly adopted and incorporated into Mexican music, creating Sinoloa Tambora, the typical banda (band) music heard in Mazatlan’s home state of Sinoloa. Today, visitors can tour what is now Pacifico Brewery.

The port was besieged several times, first in 1847 by U.S. troops during the Mexican-American War and again in 1864 during the French occupation of Mexico. Southerners attempting to spread Confederate ideals during the Civil War overran it. Chinese laborers came in the late 1880s and dispersed throughout northeastern Mexico. The Buddhist temple used by those who stayed still stands.

Turistas make up the last link of multicultural invasions. Visitors started arriving in the 1930s when affordable Mazatlan was Mexico’s only Pacific coast resort. In the 1950s, some hotels appeared on Playa Olas Altas, a small cove surrounded by high, rocky hills and blessed with big waves. Today, those waves attract surfers, as well as spectators who come to watch men dive from a high natural tower into the shallow, rocky waters. Three old hotels and a series of outdoor cafés create an atmospheric waterfront for the informal show.

One of the original attractions, hunting, has diminished with government conservation efforts, but sport fishing remains a major draw. The Pacific Coast offers world-famous bill fishing (marlin, swordfish, sailfish), and Mazatlan bears the tag “Billfish Capital of the World.” Its name derives from the Aztec for “land of the deer,” another bow to its abundant natural splendors. Strolling the Malecon — This sidewalk atop a sea wall (the longest on the Mexican coast), rambles 14 miles from the Zona Dorada south to old Mazatlan and offers sunset views from the cliffs. The route is dotted with art and monuments: a vat from Pacifico brewery; a tribute to a Sinoloan family, a bronzed pulmonia, the city’s beloved open-air taxi; and the Fisherman’s Monument. Snack bars and restaurants beckon across the street.

Taco Alley — The first three blocks of Calle Gutierrez Najera turn into Taco Alley after 5 p.m., with open-air restaurants serving tacos of all kinds for about a dollar.

Fishing — Hire a deep-sea charter boat or rent your own sporty panga and cast for feisty marlin or sailfish.

Inn at Mazatlan — More like a high rise, but smack on the beach, offering rooms, suites, and a penthouse.

RCI Gold Crown Resort — A view from every room and a restaurant with an award-winning chef. In the heart of the action on Cameron Sabalo.