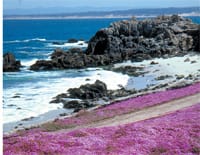 The Monterey Peninsula — that mitten of land jutting into the Pacific Ocean — holds Monterey Bay’s perfect crescent on its north end and the compact Carmel Bay on its base. A landscape of ancient forest, picturesque boat harbors, early architecture, and plenty of walk-through California history weaves between those scenic waters.

In his 1835 classic Two Years Before the Mast, Richard Henry Dana called Monterey the “pleasantest and most civilized place in California.” As the state’s first capital, the town is certainly a historical centerpiece with well-preserved Old Spanish and Mexican adobes.

The Path of History walking tour through downtown Monterey presents a modern tourist experience shrouded in history. Start at Custom House Plaza, where buildings cluster around the waterfront near Fisherman’s Wharf and its jumble of gift shops, kiosks, and seafood restaurants.

Built in 1827, the adobe Custom House, California’s oldest building, once served as the state’s only port of entry. The two-story Thomas Larkin House melds elements of New England architecture with the adobe motif to represent a new architectural style: Monterey Colonial.

Cannery Row (www.canneryrow.com) sardine factories first appeared in the early 20th century. John Steinbeck called it “a poem, a stink, a grating noise” in his 1945 literary classic of the same name. By World War I, Monterey sardines were in demand worldwide. In 1950, the fish abruptly disappeared and most canneries closed. Today, the area’s former bars and brothels live on as shops and restaurants.

Luxurious rooms with fireplaces and sea views set the tone at The Lodge at Pebble Beach, built in 1919. In addition to the legendary golf course, tennis club, and equestrian center, guests enjoy privileges at The Inn at Spanish Bay, a newer, beachfront luxury hotel under the same management
as The Lodge at Pebble Beach. Visit both properties online at www.pebblebeach.com.