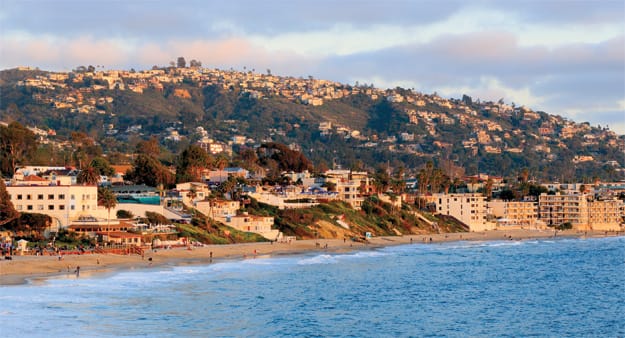 A dollop of history garnishes every bite of Orange County. Modern media hype the region to a cliché wealth and status, but the richness of “The O.C.” landscape and its cultural pleasures offer a cornucopia of delights.

Laguna Beach — that curve of surf-ruffled sand bound by steep cliffs in the heart of The O.C. — could be the original California postcard. Historically, the Shoshone Indians called it their name for “lakes.” Later, the Spanish, referring to the region’s fresh water lagoons, named Laguna “canyon of the lakes.” Over the years, the town developed its own charm, attracting artists and individualists who spawned the array of colorful shops and galleries.

Art defines Laguna Beach, home to more than 50 galleries. Dozens of artists discovered its Riviera-like light at the turn of the 20th century and stayed to form an art colony. Laguna residents numbered 300 in the mid-1920s, with half being artists. Now more than 90 years old, Laguna Art Museum grew out of that association of plein-air artists who painted in the style of the French Impressionists.

Three world-renowned art festivals are their progeny. Laguna’s signature event — Festival of the Arts — actually is a triptych comprising a juried fine art show, Pageant of the Masters, and the Sawdust Festival. It has become a summertime tradition, dubbed by American Style magazine as one of the top 10 art festivals in the United States.

It all unfolds in Laguna Canyon, a broad, tree-shaded setting where the event (July 5-Aug. 31) showcases about 150 of The O.C.’s top artists at Irvine Bowl Park (650 Laguna Canyon Road). As for Pageant of the Masters, Director Diane Challis Davy has chosen “

The Muse” as the theme for this year’s tableaux vivants (living pictures). Irvine Bowl Park (650 Laguna Canyon Road) stages this theatrical production nightly at 8:30 p.m. During the Pageant of the Masters, volunteers transform into life-sized re-creations of classical and contemporary paintings, sculptures, and other works of art, combined with live narration and original orchestral scores. Point your Web browser to www.LagunaFestivalofArts.org for more information. A special promotion offers patrons a Passport to the Arts for $19, which grants unlimited admission all summer to the Festival of Arts, Sawdust Art Festival, and Art-A-Fair. Merchants throughout Laguna Beach offer discounts to Passport holders. Visit www.LagunaBeachPassport.com or call (949) 497-0521.

Orange County also has a bounty of natural history. Nearby Crystal Cove State Park, Southern California’s largest stretch of undeveloped coastline, offers a firsthand feel for the area’s early days. An expanse of beach roiled by waves, bisected by wooded canyons, and backed by dramatic sandstone cliffs, the secluded seashore drapes the coast west of busy Pacific Coast Highway. It meanders over three miles of natural beach between Laguna and Corona del Mar before curving east into the hills around Moro Canyon.

Rocky outcroppings create a picturesque background for the wealth of tide pools and shoreline comprising the Irvine Coast Marine Life Refuge. A few dozen old beach cottages, remnants of the original Crystal Cove resort community, tuck into the rocks. Their wood frames have changed little since construction in the 1920s. Named to the National Register of Historic Places, they are available for rent through California State Parks system.

Among those wooden cottages stands the Beachcomber, a beachside café that also dates back to the 1920s yet serves a properly updated menu of sushi, salads, and burgers. Guests watch sea kayaks ply the water from its beachside terrace. On the cliff above perches the timeworn Shake Shack, still serving its old-fashioned fare.

In contrast to Laguna, Newport Beach is a thriving model of contemporary culture and lifestyle. Its history dates back to 1905 when the Los Angeles Red Car Line, an electric railway system, was extended to Newport Beach and brought such a daily hoard of beach-lovers that within 10 days residents erected a hotel to accommodate them. The influx also spurred construction of the Balboa Pavilion, which has become a local icon.

One year later, Newport Beach officially became a city and soon became the premier yachting port for Southern California. Realizing the real estate potential in what was then a mud flat, businessman William Collins dug a channel on the north side of the bay, using sand and silt from the dredging to build Balboa Island. He heralded Balboa as “an island paradise.” Eager investors followed, and the city began a series of dredging projects to encourage boat traffic. By the 1920s, Lido and Balboa islands became charming communities and a haven for boaters.

Newport Beach attracted movie stars such as Errol Flynn and John Wayne (who, due to a bodysurfing injury sustained at Balboa Pier, had been forced to abandon his USC football career and pursue acting). The city honored the anniversary of Wayne’s 100th birthday in 2007 with a yearlong celebration touting his virtues as “the very best of what we are and can become, a symbol of excellence.”

The arts fueled early growth, and Orange County never lost those cultural underpinnings. What has evolved is the entrepreneurial spirit — a quest for the best that helps explain today’s coastal lifestyle. A prime example is the newly opened Resort at Pelican Hill, rising above the Newport Beach coast on 504 acres surrounded by nearly 50,000 acres of protected habitat. Inspired by 16th century architect Andrea Palladio, Pelican Hill’s elegant Tuscan style and Mediterranean landscaping blend seamlessly into the California hills.

The merger of art and shopping becomes idyllic in Costa Mesa. From the Richard Serra sculpture defining the Performing Arts Center, visitors saunter over the pedestrian footbridge, a rainbow arc above busy Bristol Street, through the Nocuchi sculpture garden and straight into South Coast Plaza.

Nordstrom, Saks Fifth Avenue, Macy’s, Bloomingdale’s, and Sears anchor the nation’s highest-grossing retail center. Like an indoor Champs-Élysées the center is designed for walking and boasts blocks of high-profile, high-fashion stores. Between these pillars of commerce are splashes of trendy boutiques and more walkways leading to super-size Crate and Barrel, Borders, Macy’s Home Store, and Sport Chalet.

Nearby, Fashion Island, the coast’s premier open-air shopping center, offers nearly 200 specialty shops, world-class department stores, and a variety of restaurants and cafes in a relaxing, sophisticated atmosphere. Among the stores are the county’s only Neiman Marcus as well as Bloomingdale’s, Macy’s, and cutting-edge retailers such as Juicy Couture Anthropologie, Trina Turk, and Y-3. And at press time, construction had begun on the West Coast flagship store for Dean & DeLuca.

Resort at Pelican Hill. This über-hotel sets a new global benchmark for luxury lodging. Clustered amid 504 acres, the resort village is a symphony of Italian architecture, not unlike a 16th century hill town in Tuscany with its Palladian-style rotundas and stately colonnades. Expansive hotel bungalow suites and villa accommodations dot the terraced hillsides and offer panoramic views of the Pacific Ocean. Villas are equipped with around-the-clock staff of personal butlers, concierges, and housekeepers. The grounds — including private clubhouse, circular saltwater pool, world-class spa, and four gourmet restaurants — are quilted in 36 holes of Tom Fazio-designed golf. Information: (800) 916-8550, www.pelicanhill.com.

Fairmont Newport Beach. This charming property exudes a dramatic feel from both architectural and design standpoints. Each and every aspect is designed to surround you in total “O.C.” luxury. Indulge in the 8,000-square-foot spa. (949) 476-2001, www.fairmont.com/newportbeach.

Bluefin. Chef/owner Takashi Abe, an alumnus of the famed chef Nobu, creates classic and Japanese fusion sushi and fine dining in this sleek Crystal Cove Promenade restaurant in Newport Beach. Abe’s French-accented Japanese dishes have been called the best on the coast. (949) 715-7373, www.bluefinbyabe.com.

Pageant of the Masters. Originated in 1933 as a simple sideshow to the Festival of Arts, the pageant ranks among the world’s finest tableux vivants, recreating famous works of art with live models, elaborate costuming, and a full orchestra.

Sawdust Festival. More than 200 artists create an avant-garde artists’ village with music and entertainment along a meandering sawdust-strewn path.

Sherman Library and Gardens. A lavishly planted, two-acre botanical garden bordering Pacific Coast Highway, the gardens remain a quiet enclave and the setting for a research library of the Pacific Southwest. Visitors with advance reservations can enjoy a peaceful luncheon in the garden and then explore the imaginative gift store.

Crystal Cove State Park. The Southland’s largest stretch of undeveloped coastline offers an expanse of beach roiled by waves, bisected by wooded canyons, and backed by sandstone cliffs. The park wends over three miles of beach between Laguna and Corona del Mar and eastward into El Moro Canyon.