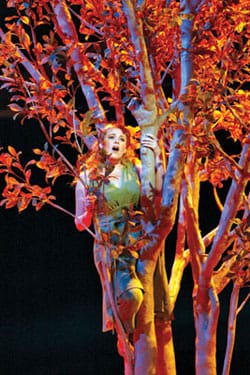 A four-pack of cultural events makes Santa Fe, N.M., the best getaway in the West this summer. The Santa Fe Opera, SITE Santa Fe, Art Santa Fe, and Indian Market celebrate the roots of the city while firmly planting its flag as a formidable destination for cutting-edge contemporary art.

The history of Santa Fe is a triumvirate of cultures. Centuries before European nations came into being, Asians crossed the Bering Strait and explored the Americas from Alaska to Tierra del Fuego. These American Indian cultures developed agricultural societies using corn, squash, and beans introduced from Mexico. They introduced building techniques and architectural styles still ecologically correct in this extreme landscape.

At the opening of the 16th century, a force came to leave a lasting imprint. Beginning in the Caribbean and fanning into the heart of Mexico and South America, Spaniards seeking gold and conquest arrived with weapons and precision warfare unknown to the Indians — including horses that made them mobile and devastating in battle.

In Culiacan, on the west coast of Mexico, Spaniards commanded by Francisco Vasquez de Coronado gathered in 1540. Fired by the “seven golden cities” legend popular in Spain, the group believed that other fabulous cities existed. They became the first Europeans to organize an expedition to the American Southwest. The seven cities turned out to be pueblos around Zuni, N.M. — and not golden at all. The expedition visited most of the Rio Grande valley pueblos, the Great Plains, and central Kansas, finally struggling back to the Rio Grande and home to Mexico. The two-year mission turned up neither a treasure nor a conquest, but it inspired missionary zeal to create converts to the Catholic faith.

In 1598, Don Juan Onate, with a force of 200 and a contract to colonize New Mexico, left Mexico for San Juan, founding it as the New Mexico capital. The Southwest received an imprint that changed the flow of culture from Indian to Spanish. Onate supervised the building of missions and mission churches at many pueblos. Spanish towns developed, the most important being the new capital: Santa Fe. During the 17th and 18th centuries, New Mexico was the heart of the Spanish empire in the Southwest.

Following Napoleon’s defeat of Spain and the independence of the Spanish colonies, a third force, Anglos, joined the Indians and Hispanics to complete the cultural mosaic. Using the rugged, 900-mile Santa Fe Trail from Franklin, Mo., to Santa Fe and beyond, traders, immigrants and adventurers left the East Coast of the newly formed American nation to seek their fortunes. Soon after emerged two industries: mining and cattle, boosted by completion of the cross-continental railroad in 1880.

While most Western communities were founded in the mid-1800s as boomtowns associated with mining strikes, Santa Fe already had a patina: The city was two centuries old when settlers headed west. Today it stands as an icon: a multicultural society that celebrates and preserves centuries-old traditions.

It may be the most concentrated art center in the world, with one of every six residents employed in the business of art. In the 1980s, Santa Fe style rose to national prominence, inspiring crafts, furniture, and architecture. The city also has become a culinary capital, with its broad and distinctive regional cuisine.

Santa Fe’s ubiquitous, low-rise adobe architecture that melds into the landscape makes it one of the last cities in North America that truly embraces the natural environment. And the redeveloped Guadalupe/Railyard District help ensure that Santa Fe doesn’t get left in the dust.

– Santa Fe Opera: On the grounds of a former ranch with a backdrop of the Sangre de Cristo Mountains, the opera house presents Verdi’s Falstaff, Mozart’s The Marriage of Figaro, Britten’s Billy Budd, and the U.S. premiere of Saariaho’s Adriana Mater.

– Canyon Road: Galleries line this historic narrow road, which follows a 13th century Indian trail from Santa Fe’s original pueblo up to the mountains. In the 1920s, artists began moving into the then-inexpensive houses. Today, that artist/studio/gallery heritage makes the area one of city’s most popular destinations.

– Guadalupe/Railyard District: Home of SITE Santa Fe and the farmers market, this area boasts outstanding contemporary art galleries and lively shopping and dining. Anchoring the area is Santuario de Guadalupe, built in 1705. The area was a booming trade center during the railroad heyday, and the depot is still in service. A commuter train starts express service between Albuquerque and Santa Fe this year.

– Downtown: Four blocks surrounding the plaza comprise the heart and soul of the city. Built on the north side in the early 1600s, Palace of the Governors is the oldest government building in the country. Inside, the Museum of New Mexico History exhibits the famed Segesser Hides, rare early Spanish paintings on tanned buffalo skin. In the picturesque portal, Native American vendors sell pottery, jewelry, and crafts. The nearby Museum of Fine Arts’ iconic pueblo mission revival architecture replicates the New Mexico building commissioned for the Panama-California Exposition in San Diego in 1915. The museum concentrates on 20th century artists. Two blocks west, the Georgia O’Keeffe Museum — the only U.S. museum dedicated to a female artist — traces O’Keeffe’s work from her Wisconsin roots through her partnership with photographer-husband Alfred Steiglitz.

– La Fonda, Santa Fe’s most historic hotel, anchors the southeast corner of the plaza. It was built in 1920 during the railroad boom. A bell tower completes its imposing pueblo mission revival-style architecture. Another of Bishop Lamy’s buildings, Loretto Chapel on Old Santa Fe Trail, often hosts weddings and concerts. Its focal point, the Miraculous Staircase — a seemingly unsupported spiral — leads to the choir loft.

– Museum Hill: At the entrance, off Old Santa Fe Trail, stands the End of the Road sculpture depicting Native Americans, Hispanics, and other locals welcoming wagons. The Museum of Spanish Colonial Arts, in a large 1930 Santa Fe- style residence, houses a wealth of traditional santos (depictions of saints) and retablos (paintings on wood and tin). On Milner Plaza, the Museum of International Folk Art holds the world’s largest collection of folk art. The product of a partnership between New Englander Mary Cabot Wheelwright and Navajo medicine man Hastiin Klah, the Wheelwright Museum of the American Indian was founded in 1937 to document Navajo culture.

– The Compound: Located on Canyon Road and boasting Mark Kiffin, the James Beard Foundation’s “Best Chef in the Southwest” in 2005, this distinctive restaurant features an elegant setting and a modern menu with bold flavors based on historical traditions.

– La Casa Sena: Cozy, charming, and bursting with the flavors of the Southwest, this history-rich restaurant offers an appreciable wine list and courtyard seating downtown off Palace Avenue (perfect for Sunday brunch). During dinner, the wait staff performs jazz and Broadway tunes. Reservations are suggested.

– Ristra: The local favorite in the popular Sanbusco Market complex serves a blend of French sauces with Southwestern flair.

– Bishop’s Lodge: Luxury resort three miles north of Santa Fe. Bishop Lamy built a lodge of two rooms and a chapel that still stand on the property. The 111 rooms spread over 450 hillside acres. Quiet and forested with horseback riding and tennis courts.

– Hotel Santa Fe: The only Native American-owned hotel in the city. Most rooms and suites have balconies or patios with views of a timeless expanse where the Rocky Mountains ease into the high desert plain.

– The Madeleine: A 15-room, Queen Anne-style inn on Faithway Street built in 1886 with serene gardens and in-house masseuse.