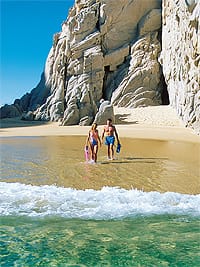 A strip of stunning landscape at the tip of Baja California, the world’s fourth longest peninsula, connects the towns of San Jose del Cabo and Cabo San Lucas. This is Mexico’s Cape Region, where the Sea of Cortez swirls into the Pacific Ocean, a tropical desert jutting into azure waters.

The two Cabos pump resort adrenalin into Baja’s thousandmile sliver of landscape. Both were remote villages until after World War II, when well-heeled Americans discovered them as venues for world-class deep-sea fishing. Without roads, early visitors arrived by pleasure yacht or private aircraft.

Original hotels such as La Palmilla, which opened in 1956 (now the One and Only Palmilla), Solmar (now Solmar Suites Resort), and the newly expanded Hotel Cabo San Lucas catered to fishermen and Hollywood notables, including Bing Crosby and John Wayne. Los Cabos remained a well-kept secret until 1974, when completion of the transpeninsular highway made automobile traffic viable.

Expansion of the airport in 1986 was the springboard to explosive growth. Luxury hotels and golf courses sprouted from the barren land, sport-fishing tournaments proliferated, and the tourism rush was on. Today the lights from cruise ships twinkle in the harbor, and sidewalk cafes offer platters of peel-and-eat shrimp accompanied by mariachi music, while sophisticated shops and dozens of golf courses beckon visitors.

Each Cabo has a distinctly different personality. San Jose del Cabo, imbued with provincial charm, offers the more laidback adventure, while Cabo San Lucas vibrates with cosmopolitan energy. Quaint San Jose maintains a semblance of its 1730 origin as a mission village with its colonial architecture and tree-shaded plazas. Shops, galleries, and little cafés are tucked away on narrow streets radiating from the central Plaza Mijares and its historic twin-spired church.

In contrast, Cabo San Lucas flaunts a boisterous, where-it’s-happening demeanor. It is a bustle of languages, a pleasing mix of age and youth. Gen-Xers who learned the pleasures of Cabo during spring break still vacation here. Spirited restaurant and bar scenes and surrounding shops make for a festive atmosphere.

First sighted by Hernando Cortez in 1537, Cabo San Lucas became an anchorage for Spanish trading ships. During Spain’s colonial period, Manila galleons used the nearby estuary as a provisioning point, a first stop after crossing the Pacific Ocean. The cape’s rocky coves served as hiding places for pirates. Catholic missionaries built 30 missions on the peninsula, but by 1854 all had been abandoned. Worlds apart in style and flavor, Cabo San Lucas and San Jose show visitors two different faces of Mexico.

Along the 30-mile corridor stretch breathtaking ocean views and white sand beaches indented with cliffs and coves, punctuated with an occasional golf course, elegant villa, or upscale hotel. Few places on Earth are so blessed with both a timeless, rugged landscape and civilized pleasures — not unlike the contrasting appeal of the two Cabos.

■ Westin Resort and Spa: A full-service seaside resort bearing the luxurious Starwood brand boasts seven pools and a swim-up bar, five restaurants ranging from elegant to casual, an outdoor hot tub, and guest rooms featuring the famed Heavenly Bed and Heavenly Bath. Book a body wrap or work up a sweat at the Starwood Spa.

■ Tequila Restaurant: Dining under the stars on a candlelit patio in the heart of San Jose with Asian, Mediterranean, and Mexican dishes prepared grilled or in a wood-burning oven.

■ One and Only Palmilla: Chicagobased chef Charlie Trotter brings his signature style to San Jose del Cabo, as well as a spa menu at “C” restaurant and poolside casual fare.

■ Shop at Copal in San Jose for native crafts and masks and nearby La Mina for gold and silver jewelry in an imaginative setting. Shops line streets abutting the plaza.

■ Smoke a Cuban cigar at Amigos Smoke Shop and Cigar Bar just off the plaza in San Jose. Amigos features a walk-in humidor and sells espresso, wine, and spirits.

■ Golf alongside the Sea of Cortez at one of some dozen world-class courses.

■ Catch a giant billfish in a rented panga.

■ Paddle a kayak along the shore.

■ Sit on a beach. The best are on the Sea of Cortez and offer the ultimate treeless, stark, dune-like white sand splashed by azure waters.

■ Watch surfers at The Zipper off Playa Chilleno where experienced surfers claim reef and point breaks rivaling those in Hawaii.

■ Dance at a Cabo San Lucas nightclub such as Cabo Wabo.

■ Sip a glass of regional Damiana liqueur as night descends over Land’s End.